Whether wasting away a relaxed, easy, and fun weekend, or facing up to some more crazy, full-on experiences, lots of people, big and small, really enjoy their time visiting amusement parks. From the tiniest parks to the largest – some measuring up to the size of an average village – there’s something for everyone, and everyone will find their niche. There are plenty of amusement parks in France, each with a whole range of different feels, but do you know the most famous and the most fun of them? All aboard – it’s an amusement park discovery!

Most people have visited this kind of amusement park at least once in their lifetime. A huge space filled with all kinds of rides, and things to do. The idea’s hardly new, and it’s kept on working! Despite some slightly extortionate prices, visitors continue coming and enjoying bumper-cars, shooting ranges, and even, for the braver among us, rollercoasters. That is, of course, without forgetting about the famous cotton candy, and toffee apples!

This amusement park, found in Dolancourt in the Aube region, is the 1987 creation of two brothers, ex-showmen themselves. Generally speaking, it’s one of the most popular parks with families, since it’s considered as being more friendly for all ages, no family member is left out! It comes in at about 40 stalls and 10 rides, leaving plenty to choose from. Among the rides are several bigger rollercoasters. For the youngest visitors, there’s: bumper cars, mini golf, paddle boats, and go-karting… So, there’s lots to keep them entertained, and to give them fond memories of the park. You might also meet the park’s mascots, Niglo and Niglotte, two hedgehogs. The youngest visitors will love them! The park is growing bigger and bigger, and now counts 4 different zones within its grounds: the Canadian village, the Swiss village, the Rock’n’Roll village, and the Village of Wonder, each with its own different attractions. Some performances are also on offer, such as magic shows, which nicely break up the day. To sum up, Nigloland is a great amusement park with fun activities and a nice bit of green space, making it feel calmer, and more relaxing than some of the other parks, where there’s a lot of excitement and agitation. 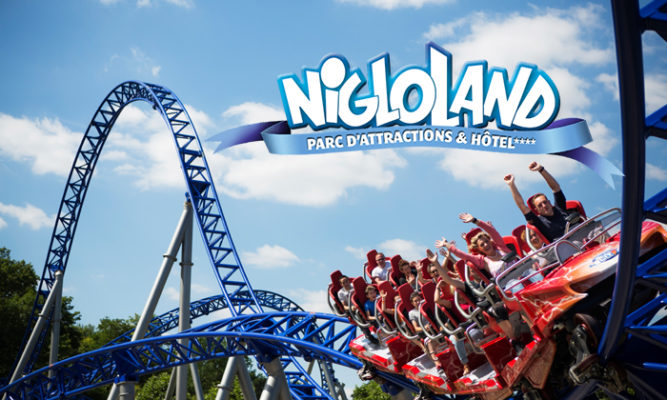 There are several parks under the name of Luna Park in France. This park has all the allures of a carnival, spread out over a large space. They’re often found in places like seaside towns, in the south of France for example, which means they’re very popular during the summer, with families and groups of friends who want to go out and have fun, and are ready to pay a pretty penny for a pleasant evening in amongst lots of different attractions. The variety is huge, pleasing the largest number of people possible. Prices can also sometimes be relatively low, which is a bonus compared to other parks which can quickly empty out the wallet of a large family, or a group on a tight budget. 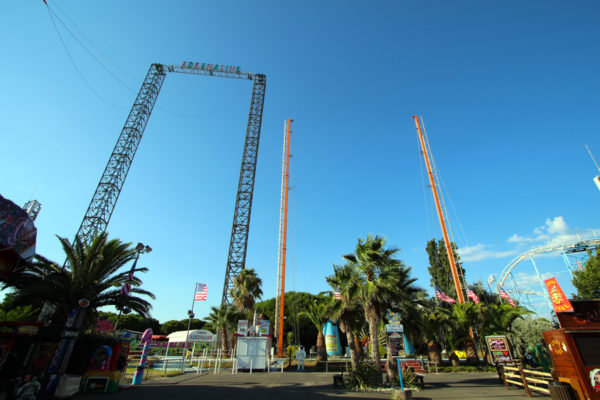 This kind of amusement park is a real crowd pleaser during the summer. When the good weather comes round, we really appreciate a little bathing. So, what do you say about a park that blends attractions and the chance to refresh oneself? It’s the perfect combination, and guaranteed fun!

There are several Walibi parks in the world, two of which are in France: one in the Auvergne-Rhône-Alpes region, and another in Agen in the south-west of France. Walibi’s concept is to mix a classic amusement park and an aquatic amusement park within the same space, with its repertoire of typical attractions alongside great water slides, for example. Hold on, why not throw in some water-related attractions whilst there’s some water around? That’s what Walibi decided to do. In fact, the park has some attractions on the water’s surface, such as Bambooz River. This attraction is like a rollercoaster, a cart follows a path, which goes up and down climbs and descents. However, there’s water underneath. The result, big splashes, but above all, a light cool off, and a good amount of laughter. More classical attractions are also adrenaline filled, and are bound to please thrill-seekers. With 465,000 visitors in 2017 for Walibi Rhône-Alpes, we can quite easily say that their concept is working! 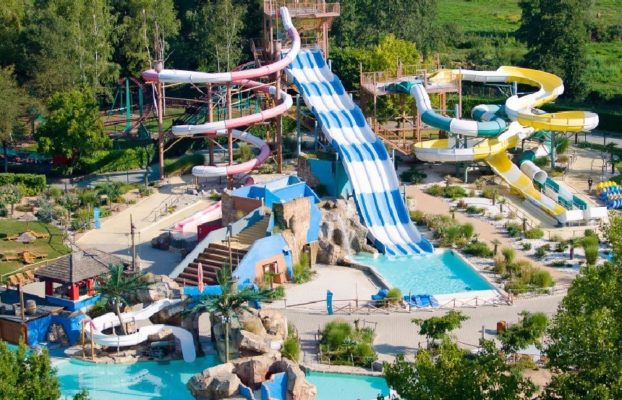 These days, most amusement parks have a specific theme on which the park is based, its informs everything, from its decoration to its attractions.

This is THE best known amusement park in France, if not in Europe. More than a theme park, it’s a veritable touristic monument, attracting more than 10 million visitors every year no less!
Disneyland Paris brings dreams to life for children and adults, through its theme; the animated films created by Disney Studios. Indeed, lots of mascots can be see around the park, dressed up as all the most famous Disney characters. You’ll have the chance to finally meet Mickie, Minnie, and all their friends! The atmosphere of the park is fairytale like, whilst there, real life is near forgotten, and everyone falls back into their childhood. During Christmas, Disneyland Paris becomes even more magical, thanks to all the animations that are put on there. Numerous shows are organised, written and acted by professionals, over the course of which the repertoire of the Disney films is revisited; so much nostalgia!
There’s a huge number of attractions within the park, so it’s unfortunately impossible to see everything, and this is only made worse by how busy it gets, the time it takes to get on just one ride can be quite long. Nevertheless, the attractions are well thought out, and there’s something for everyone. Rides for kids, rollercoasters for adults, you name it. One of the best known rides is Space Mountain, guaranteed thrill.
If the opportunity ever presents itself, make sure you visit Disneyland Paris!

Le Puy de Fou is an amusement park, situated in Vendée, which sends you through time and drops you off in France as it was during various different periods, from medieval times to the 20th century. It’s therefore a park that’s both lots of fun, but also very interesting and educational, somewhere you can learn about the history of France and discover life as it used to be thanks to its very well done animations. The park even received the best theme park award in 2012, for its quality and its reputation as the “best theme park in the world”. It’s above all the shows that are organised there that wow visitors, retracing different historical scenes with realistic performances, such as the battle reenactments, for example. The space is also very nice, it has many parks and gardens, as well as a number of “villages”: the 1000 AD Fort, the Medieval Commune, the 18th Century Village, and the 1900 Market Town. It’s home to another breath-taking spectacle, la Cinéscénie, a night time show that shows visitors something of the history of Vendée.
Whether you’re interested in French history, or you simply enjoy shows, you won’t regret your trip to Le Puy du Fou. 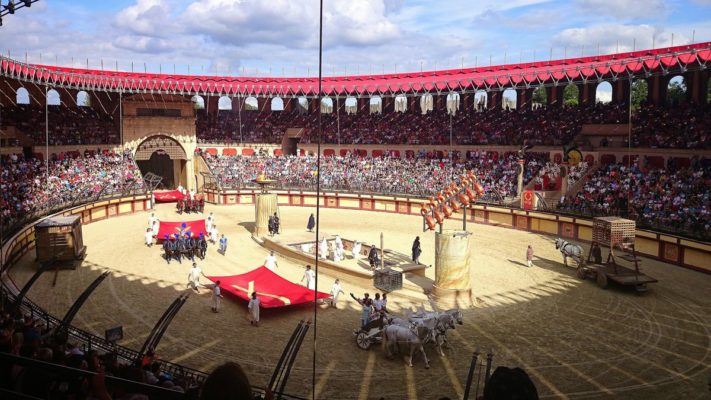 Copied from the world of Asterix and Obelix, this theme park is one of the most popular in France. It’s made up of several zones, each with its own attractions and shows: we’ve got the Roman Empire, Ancient Greece, the Vikings, Through Time and Space, Welcome to the Gauls’s, Dogmatix’s Forest, and even Egypt. The rides within each are conceived in relation to the zone they’re found in. Each year, new rides are installed, meaning the park can renovate and carry on attracting new visitors. There’s a total of nearly 40 attractions available to tourists. With an average of around 1.5 million visitors per year since it was built, Le Parc Astérix is one of the biggest theme parks in France.

If you like the Wild West, cowboys and indians, this park was made for you! Found right by Marseille, this theme park has recreated a Wild West village, with all the decoration and the kind of atmosphere that comes with it. The attractions are also conceived in this same vein, their names are inspired by the different elements of this fascinating period. The park has more than 30 attractions, 5 of which are rollercoasters. There are also lots of installations on show, such as actors playing out face offs between cowboys and indians. 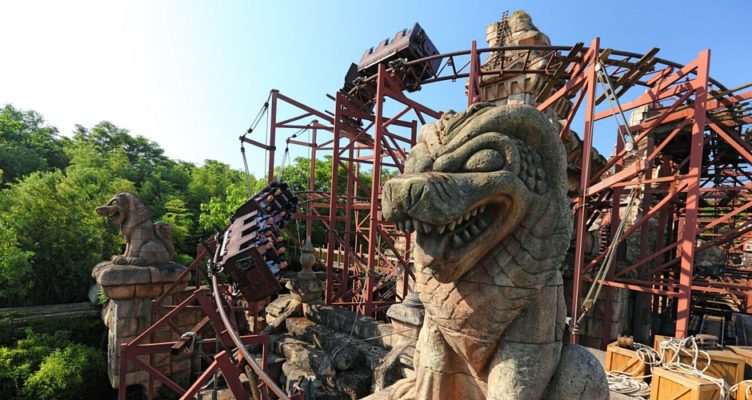 The theme of this park is that of volcanoes. Found in the Puy de Dôme county in the region of Auvergne, at the heart of the volcano park there, Vulcania expertly teaches us a thing or two about the world of volcanoes and the ecosystem of Auvergne. Lots of films and attractions are put in place so that the public can discover this world; such as their artificial geyser, earthquake simulator, and even a show with a golden eagle. It’s a really interesting place which offers heaps of new experiences. 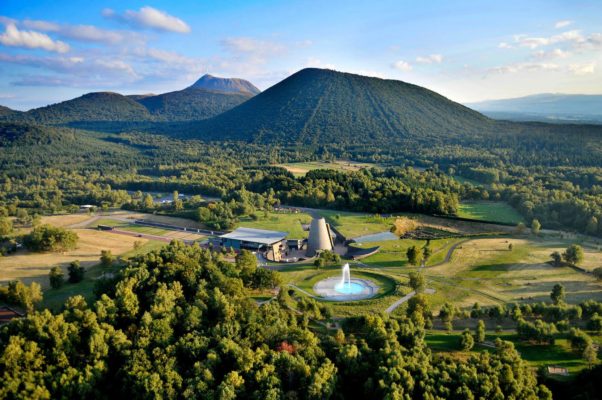 If you like futuristic style activities and experiences, you’ll like Futuroscope. Situated in Poitiers, it’s one of the best known parks in France, and one of the most visited, with more than 1.5 million visitors each year, on average. It’s super fun, and a whole range of different activities are offered: 4D film screenings, sensory simulators, outdoor exhibitions, and even shows, always based on the theme of new technology and science. With its films, you’ll find yourself thrown into other worlds, as if you were there! It’s a very visual park which excites incredible, and previously unexperienced sensations, thanks to its breathtaking shows and installations! If you enjoy all things futuristic, creative, and original, Futuroscope will be a great day out for you.

If you’re travelling through France and looking to take advantage of a nice sunny day with friends or family, this list should give you some ideas to choose from when looking at amusement parks in France. You can also have a glance online http://www.parcattraction.org or https://www.familiscope.fr/sorties-famille/parcs-de-loisirs/parcs-d-attractions/, where you’ll find amusement park reviews.