Unveiled for the first time at the 1936 Paris Motor Show, the D8-120 takes the top spot in Louis Delage’s prestigious brand, which had been badly battered by the great economic crisis, taking the lead in French production after 1936. In 1935, Louis Delage, not wanting to admit defeat, envisaged a host of different solutions to save his business, whose name had become synonymous with the race trak. In the end, his intrepid industrial spirit would continue to flourish quite brilliantly thanks to a new company, formed by Louis Delage and Walter Watney, a British businessman who ran a major Delage dealership in Paris. With this partnership, Delahaye became the new car manufacturer for the “New Society of Automobiles Delage”. Built on a short chassis, the D8-120 is a sporty version of the D8-100, financed by Delahaye and developed by an independent team of Delage alumni. The Delage D8 are undoubtedly some of the most beautiful cars produced by a French brand. They are elegant, refined, ​​very classy and was almost the prototype for high performance luxury cars. 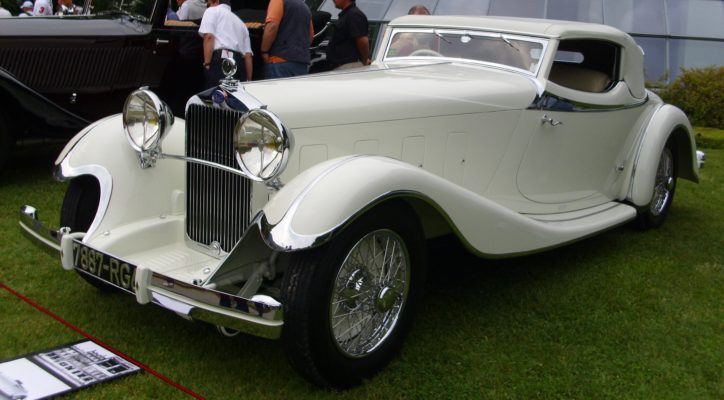 In 1948, Delahaye unveiled its first post-war model, the Type 175. Inspired by the Lockheed Constellation model aircraft, this unique roadster is considered to be one of the most beautiful cars in the world. It stole the show at the Salon de Paris in 1949. The Saoutchik Delahaye roadster is one of the last true examples of French made luxury cars, the first owner of which was Sir John Gaul. Friends with Prince Rainier of Monaco, he routinely shows off his car across Europe in several elegance competitions in an attempt to win a variety prizes. Five years later, the car is sold to a young film star and a 50s sex symbol, Diana Dors, considered by many to be the British Marilyn Monroe. At age 20, without even having a license, she becomes the youngest person to own a Rolls-Royce in her country. She would go on to pass away in 1984 at the age of 52 and the Delahaye is sent to the United States, changing hands several times since. 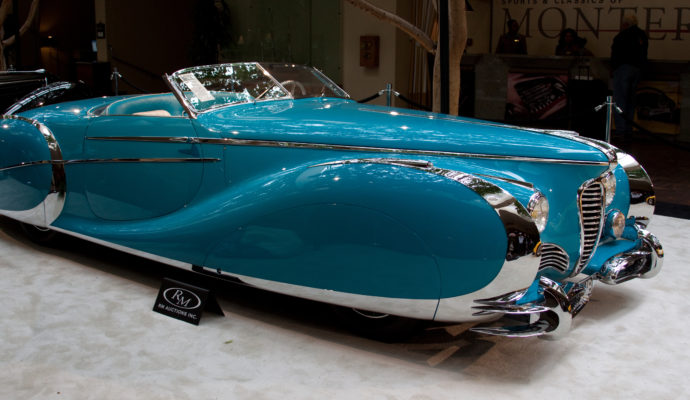 Just when the country is rebuilding after the Second World War, the Peugeot 203 leads both Peugeot and France to recover from the stigma of war. In this post-war period, where economic difficulty was an everyday occurence due to lack of access to raw materials (rare steel, expensive gasoline) the next Peugeot model had to be as economical as possible. The new Peugeot 203 was unveiled at the Paris Motor Show in October 1948 and became at that time, the only real mid-range French car of the post-war period. Despite the economic constraints surrounding the project, it is more refined, which directly contrasts with the pre-war vehicles produced in terms of style, technique and design. For the Peugeot 203’s style, the designers replicated the stylistic style of American cars, which were very fashionable at that time, featuring an elegant style with curved lines.

In terms of inside the car as well, the American touch is obvious in the addition of a shifter behind the wheel. It is an element that will feature, with little or change, for the next 12 years. 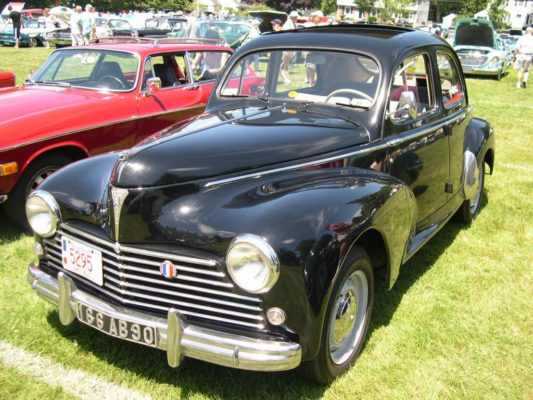 Designed without the slightest economic sense in mind during the 1930s, the 2CV was extensively reworked, concealed from the Nazis during the war. It was unveiled in 1948, featuring a body composed of steel and a flat-twin, air-cooled engine. Despite its radical look and poor performance, it was appealing due to its totally unconventional modernity, handling, comfort, reliability and economy of use. These qualities were so appreciated that this model would go on to last another 40 years! At first, due to the need for rationing of raw materials, Citroën started out by selling only to notables (doctors, priests …). Waiting lists were maxed out, but after a few years, two-stroke models began to flood the market. Since then, it has constantly been updated from 9 to 29 hp, 65 to 110 km/h! Unfortunately, due to the lack of an efficient industrialised manufacturing process and the absence of any commercial pragmatism, its success was far lesser than that of the VW Beetle. The 2CV sold 5.3 million units, compared to the VW Beetle, with over 20 million . 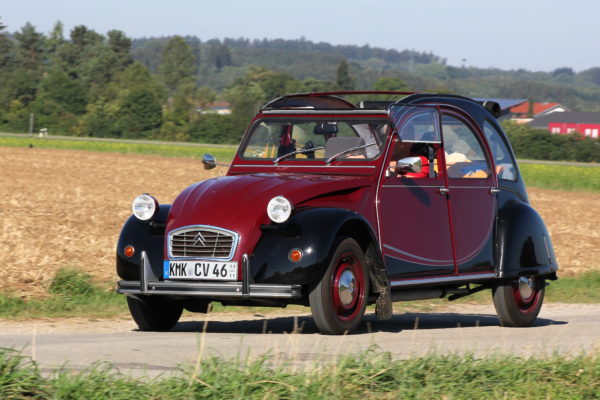 The Citroën DS is undoubtedly one of the most innovative cars in the history of the automobile. Unveiled in 1955, the DS was far more developed than any of its competitors, it featured a variety of revolutionary technical solutions, starting with hydropneumatic suspension. The DS was a lasting success until 1976! This, thanks to its efficient handling, braking and increased comfort, not to mention it sculpted lines, designed by Flaminio Bertoni. With the ability to drive despite having flat tires, this car saved General de Gaulle’s life during the attack of Petit-Clamart, entering it into the legends of early French history. It is also, with 1.4 million copies, the most produces high-end French product. 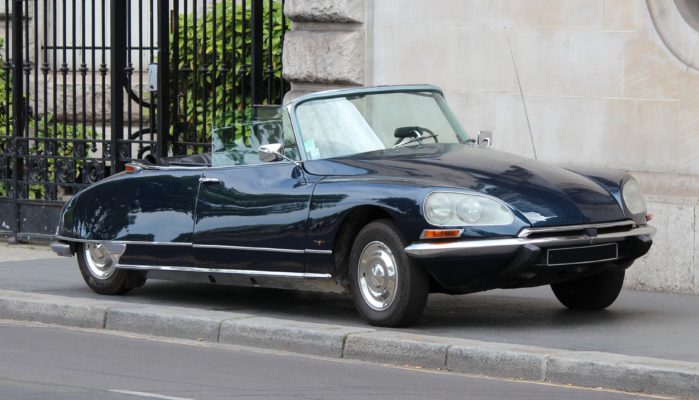 The Alpine A110, better known as the berlinette, is the car that best exemplifies the French comeback into professional motorsport in the mid-60s, be it in rally or on the track. Unveiled in 1961 and produced until 1977, the A110 is probably the sport car that has most been imprinted on most French automobile enthusiasts’ mind. It is a real legend that a whole generations of drivers adored, not least of which because of the victory titles it accumulated, even on an international scale. Be it in the form of a convertible or a sport coupe, the Berlinette has always been designed for racing. Of a basic construction, it is equipped with a maximum of standard parts from a variety of brands. The car’s real asset is its lightness.

The Alpine A110 was featured in “Tendre Voyou”, a French film with the famous actor, Jean-Paul Belmondo. 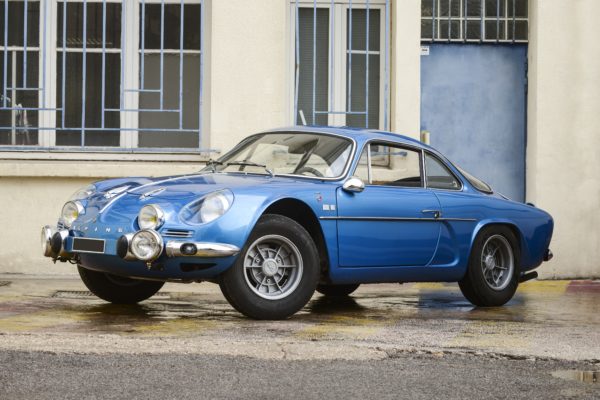 The Renault Spider is one of the few sports performance cars that have been able to become collectors of real worth right after being unveiled. With it’s high quality craftsmanship from its Alpine workshops, the Spider was Renault Sport brand’s first commercial model and remains to this day a jewel of a car. The idea for ​​the Spider came about when Renault unveiled a bold concept car at the 1990 Paris Motor Show, the Laguna Roadster, which was lacking in both a roof and a windshield, with clean lines and doors that opened sideways. The Spider Renault was therefore built off of that, and designed in part to beat out its internal competition. 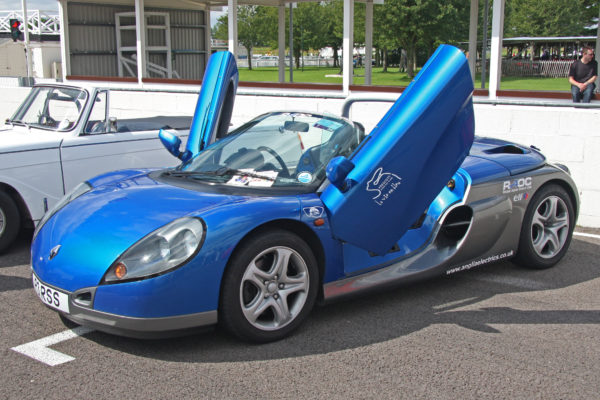 Launched symbolically with the eve of the start of the 1960s, the Peugeot 404 was the Sochaux firm’s comeback statement. Modern, yet toned down, it was unanimously acclaimed for its road qualities and was immediately recognized as a huge commercial success. The first Peugeot model to be produced for more than a million units, it will go to to sell for fifteen more years, becoming an inseparable of the French automotive landscape. The car stayed in the Peugeot catalog no less than 19 years and during that period, was at the forefront of innovation in the French automotive industry, due largely to the fact that Peugeot was the first French car manufacturer to introduce the fuel-injected engine. 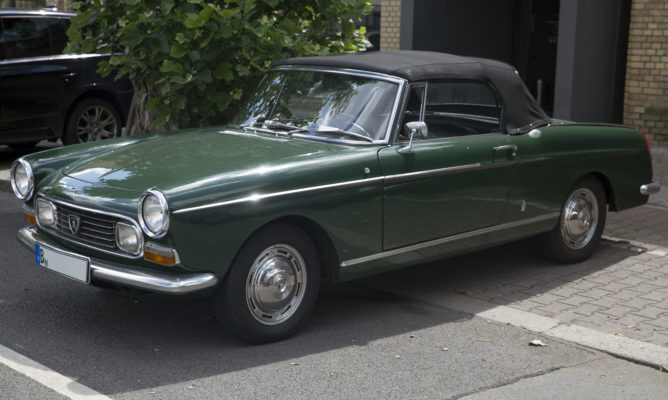 The idea to launch a coupe model on the French market was quickly adopted by Renault executives. The selected design is very modern and aerodynamic, which ensures a generally impressive reaction from the public. The design is also quite innovative in the way that the fenders are attached. Its bubble like shape also plays into the modern theme. At the Geneva Motor Show, held in March 1980, Renault launched the Fuego, Spanish for fire, the first car in the world to be equipped with centralized infrared remote control locks. As soon as it was on the market, the Fuego went head to head with the GTIs. At first, it is offered with three different size engines and finishes. This is a strategy that is totally different from the usual approach. It consists of putting the most powerful model out first, and then declining the model with the less powerful ones afterwards. 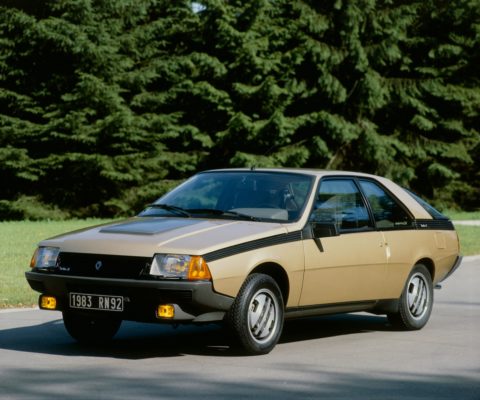 1934 was an important year for Citroën: The company, with its finances in freefall, was forced to release a new, innovative model to raise its production numbers, which were rapidly declining. The Rosalie model is selling well, but not enough to satisfy the Citroën accounts. Citroën’s “hail mary” car was introduced on April 18, 1934. Its name, Citroën 7, in honour of the 7 fiscal horsepower, but the population quickly ends up re-baptising the front wheel drive vehicle as Citroën Traction. It was produced between 1934 and 1957 by Citroën at the Quai de Javel factory. The Traction would go down in French automative history because it will be widely used by the resistance during the Second World War. It will be produced around 760,000 times. 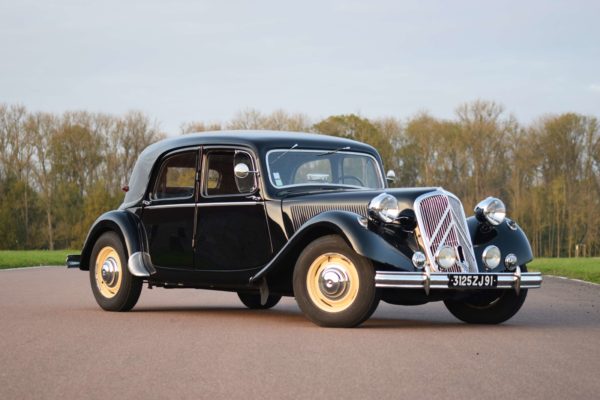 Peugeot has had great success with the 205 model over the 1980s and 1990s. This is a popular car for many French people to have as a first vehicle. It is often associated with young and dynamic people. Without the 205, Peugeot may have disappeared. The 205 is the model that saved the brand, and it is also the flag-bearer of a new generation of models. Unveiled on February 24, 1983 in Mulhouse, this model is now represented on every continents and in more than 120 countries. In 1986 and 1987, the 205 is crowned best car sold in France, as well as the most exported. 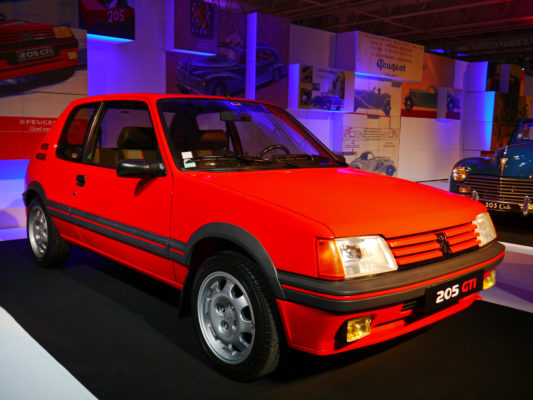 In the early 1970s, the automotive market was highly segmented. There were only three types of cars available: small, medium and large cars. While all of these models were more or less strong and reliable, any comfort, elegance and performance was reserved for the larger vehicles. In 1968, Pierre Dreyfus, President and CEO of Renault, follow his intuition that the market was ripe for a new vision of the small car. It would be as solid as the 2CV or the Renault 4, but with more elegance and increased speed on the road. The mission coined Project 122 is launched. It will eventually come up with the Renault 5. Launched in 1972 on the small car market, which was then dominated by the Renault 4 and the Citroën 2CV, the Renault 5 quickly found a space for itself. More powerful and “sexier” than its competitors, it stood out as “the” small car of the 1970s and 80s. A success of both the technical and aesthetic qualities, the model was confirmed to be a commercial success, with over 5 million vehicles sold. 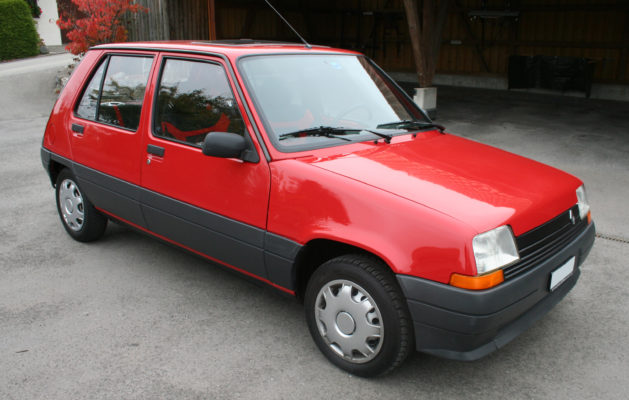