A land of history and diversity, the Camargue is one of the most typical regions that you can visit in France. Discover its unique landscapes and iconic animals. Change of scenery guaranteed !

What is the Camargue?

A unique region in France

The Camargue is a French natural region located at the edge of the Mediterranean Sea, in the departments of Bouches-du-Rhône and Gard, and formed by the delta of the Rhone.
It is a wetland that is home to many animal and plant species.
It is classified as a biosphere reserve and regional natural park.

The Camargue forms a triangle of 150,000 hectares whose spikes are Arles, Le Grau-du-Roi and Fos-sur-Mer. Arles, north of the delta, is the largest city of Camargue.
We can distinguish two Camargues.
A Camargue is dominated by fresh water and an irrigation system has been built over the centuries, allowing agriculture and especially rice growing.
To the south is a Camargue shaped by the incursions of the sea and under the influence of salt: there are the salt marshes of Salin-de-Giraud and Aigues-Mortes. 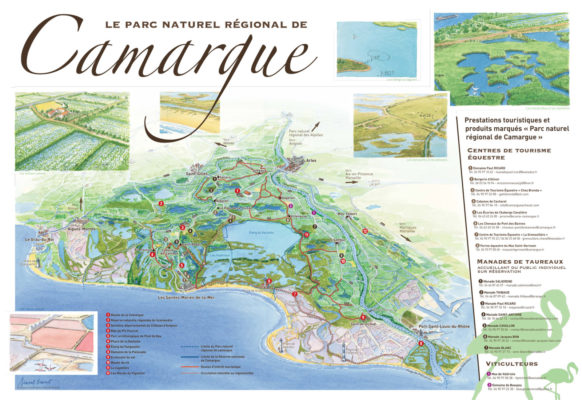 The Camargue is subject to the Mediterranean climate with a long summer period, hot and dry, mild winters, sunshine and irregular rainfall. Its climate has peculiarities related to its geographical location south of the Rhone corridor between the Cevennes and the Southern Alps.
Thus the autumns, and to a lesser extent the periods April-early May, are watered by brief but important rainfall and winters sometimes rigorous because of the mistral.
In winter, temperatures frequently drop below zero for periods that can sometimes exceed several weeks.
Thunderstorms usually occur in autumn and can cause 200 mm of rain a day and sometimes more. Lasting a few hours, they are often violent. Caution is needed.

Despite a very flat terrain, the Camargue has many different backgrounds.
The coast, entirely sandy which extends on 95 km. The Pointe de Beauduc and the Pointe de l’Espiguette are sites of deposits of sediments of the Rhone and the beach can reach a kilometer wide.
The marshes fed with fresh or salt water by canals, can be deeper and shelter reeds, irises or rushes or even, for those regularly drained, a specific flora.

The “sansouires” are salt-floor steppes where adapted plants, the samphire winemakers, grow. Often cultivated, those that survive are now protected.
Lawn areas have been largely replaced by rice paddies while wooded areas occupy more than 3% of the Camargue, along the river.

The Camargue is home to an exceptional living heritage and is home to many animal and plant species.

Above all when we evoke the Camargue, we think Camargue horses.
This breed known worldwide for its strength and passion is considered one of the oldest horse breeds in the world.
The Camargue horses usually have an entirely white dress.

The bulls of Camargue

We also think Camargue bulls. This breed wears a shiny black dress and very raised horns. This is the only European race that is still considered wild.
It is mainly for bullfighting.

A group of bulls of Camargue

The birds of Camargue

The region is a migratory stop for ducks and waterbirds: there are 150,000 individuals in transit each year.

In summer, there are up to 30,000 pink flamingos: the Camargue is the only annual breeding ground in Europe for this animal. An islet has been built for its reproduction on the pond of Fangassier. 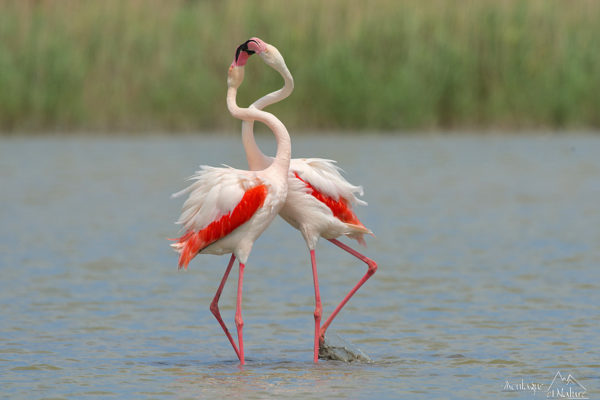 The Cattle Egret is found more often in fields than in swamps.
But its favorite place remain the rumps of horses and yes ! 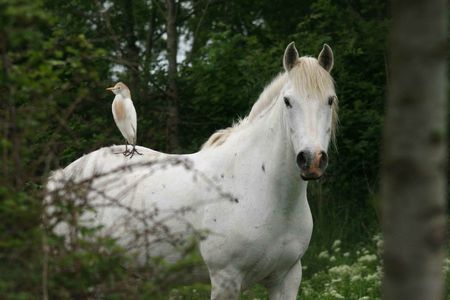 Other specimens of Camargue

The Camargue is home to the pond water, a freshwater turtle that lives in the marshes and canals, and the nutria, introduced in the nineteenth century.

The Camargue is also known for its mosquitoes: there are 40 species.
Remember to equip yourself to avoid being devoured by these small insects!

Finally, the particular climate and environment are the development of adapted plants, such as salicornia and saladella, which have the particularity of growing in salty environment, as well as the lily of the sands that bloom in the dunes. 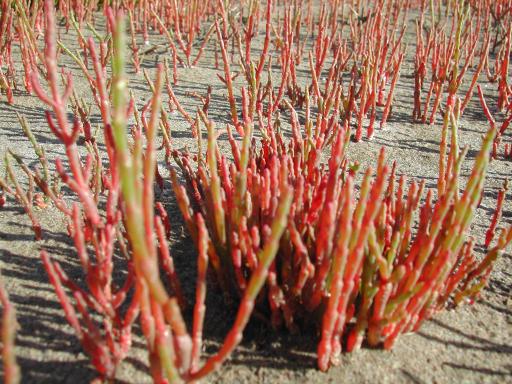 Have a coffee on Forum Square in Arles.
This pretty town is full of majestic monuments, alleys and squares with a Provencal accent. At the heart of its ancient labyrinth, take a short break on the Forum Square, with its trees, its colorful facades and – icing on the cake – the famous coffee painted by Vincent Van Gogh.
Affectionate and authentic, Arles is the perfect stop before starting his circuit in the Camargue. 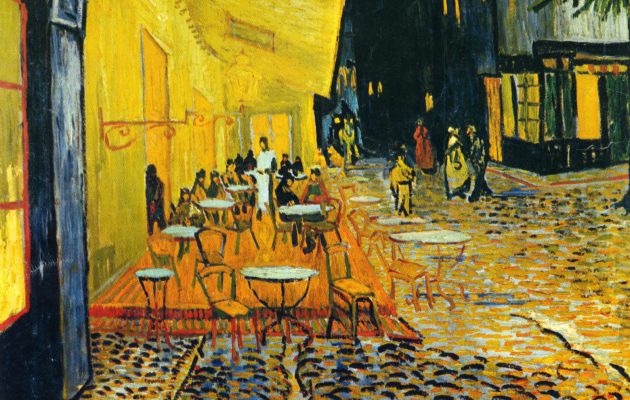 The painting of Arles coffee by Vincent Van Gogh

To go “at the end of the world”

Beaches of sand, you will find everywhere on the hundred kilometers which account the coast of Camargue. However that of Beauduc is different: it is one of the last wild beaches of France.
A trail of ten kilometers takes you to this site at the end of the world, spared by mass tourism.
Ideal for swimming, walking, picnicking, fishing or kite surfing.
Coming from Arles, before reaching Salin-de-Giraud, turn off towards La Bélugue. Attention, only vehicles less than 2.10 m are allowed to use this “road”; and count three quarters of an hour of patient driving to get there.

Not far from the beach of Beauduc is the pond of Fangassier. This one is THE paradise for one of the symbols of the Camargue: the pink flamingo. The Rhone Delta is indeed the only breeding site of this bird in Europe. In summer, 50,000 come to nest and live in these Provençal lagoons. A marked circuit makes it possible to go around the pond and an observatory has been built to accommodate the general public.
If you want to know everything about flamingos, visits accompanied by the regional park of Camargue are organized from April to September.
Information on 04 42 86 89 77. 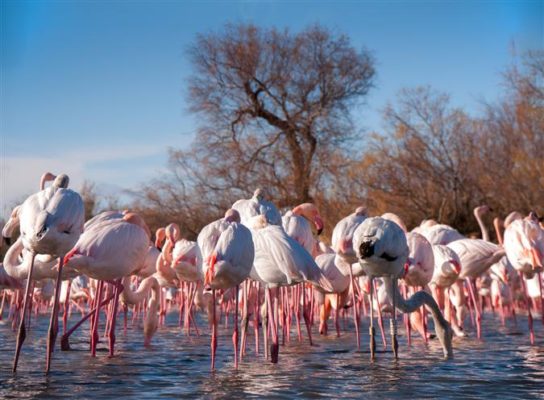 Peaceful group of flamingos at the pond of Fangassier

An unusual point of view

Facing the Mediterranean, the town of Saintes-Maries-de-la-Mer is the small capital of the Camargue. Life was not always gentle as evidenced by the surprising fortified church which sits in the middle of the village. But today, only pleasure leads you in the low streets, the port or the beaches of the village. Note that each May 24, the Saintes-Maries-de-la-Mer become the epicenter of the gypsy culture of Europe.
It is possible to access the large terrace that crowns the church.
Stunning views of the village and the Mediterranean! 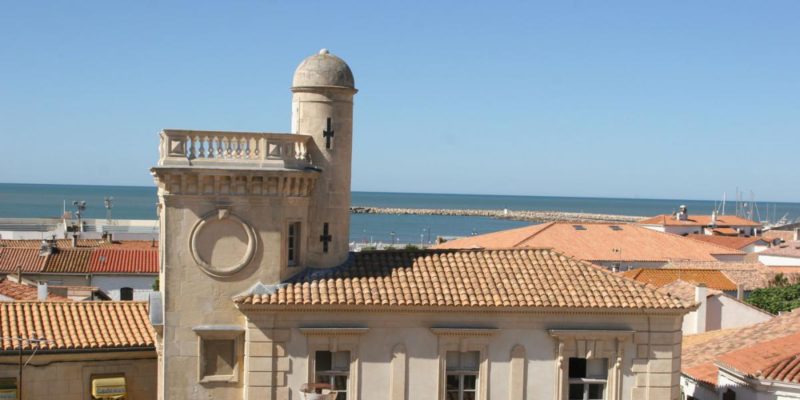 The fortified church of Saintes-Maries-de-la-Mer

This is the traditional dish of Camargue, which the gardians loved … It is a stew of bull meat (Camargue obviously), cooked in a full-bodied red wine with vegetables, spices and some citrus fruits. It is accompanied by rice (Camargue too, obviously). A dish of character (like the Camargue, again !). 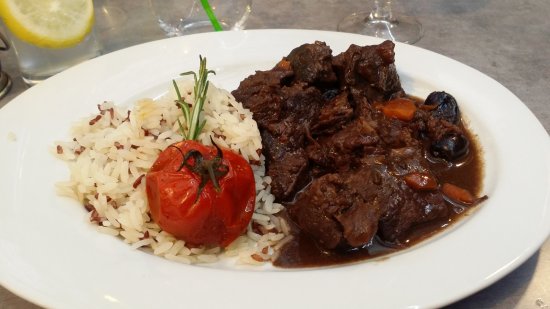 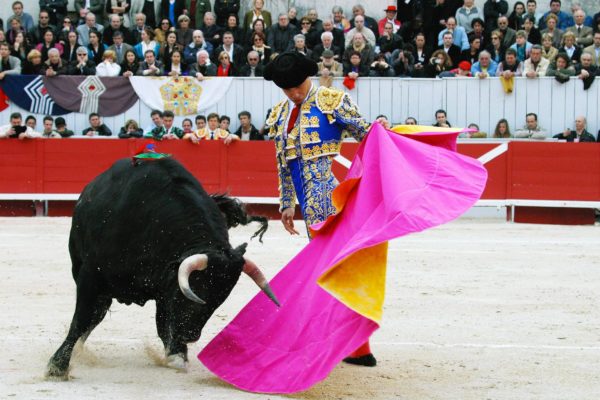 A toreador in traditional dress facing the bull in the arena

Embark on the ferry of Sauvage

Because when you think about it, the Camargue is an island! And it seems to take great care not to get too close to the continent: in all and for all, only 5 bridges span the arms of the Rhone. There is a nice alternative for those who have a little time out of the Saintes-Maries-de-la-Mer: take the tray of Sauvage. A boat typically Camarguais !
It is not uncommon for horses to accompany you during the crossing, especially in the summer. 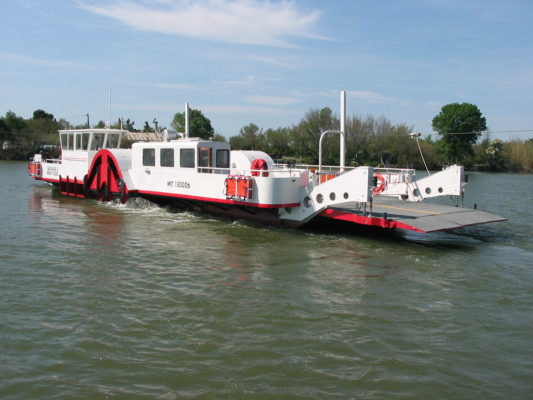 The ferry of Sauvage

See an exhibition at Avignon Castle

The castle of Avignon is a surprising architectural delirium built by a certain Louis Prat Noilly at the end of the 19th century. It is actually the epicenter of a huge vineyard and agricultural estate, which covered up to one third of the Camargue. Dozens of employees of the estate benefited from all the amenities, including a school for their children, a small church. The venue offers year-round contemporary cultural programming in the gardens and rooms of the castle. It gives a crazy but totally successful cohabitation. The interest of the visit, beyond the exhibitions, is the place itself.
As the castle is super well preserved, we can easily imagine life in this castle in the nineteenth with comfort and technology completely unexpected for the time. 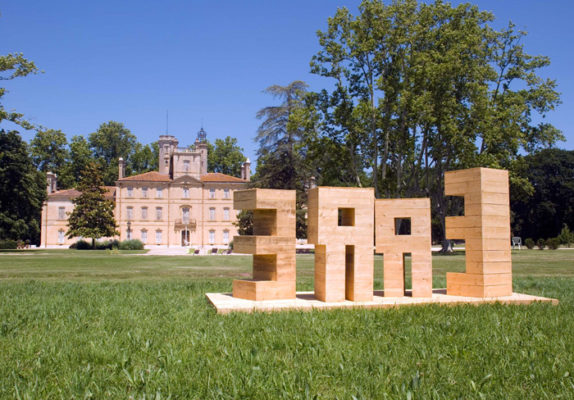 Some exhibition at Avignon Castle, view from the garden

At the mouth of the Camargue, Aigues-Mortes is like a mirage: a medieval city almost intact, still belted by its powerful walls. At the time, the city was a port, an ideal embarkation point for the Crusades.
The 1640 meters of fortifications of the city are raised in two waves of construction: the first under Philip III the Bold and the second under Philip IV Bel who made complete the enclosure between 1289 and 1300.
Today, the sea has withdrawn, leaving Aigues-Mortes in the middle of meadows. You can climb the walls and fly over the city. You will then see the other treasure of the city: the salt, with the strange vision of salt marshes that turn red on the other side of the ramparts, and the great dunes of an immaculate white.

By the sea or a pond, in a typical village or quiet inland.
Solo, family or group, you will surely find your corner of paradise for the most beautiful stay in the Camargue.
All you have to do is choose: gypsy caravan, typical Camargue farmhouse, gardian hut, perched hut, hotel or gite with pool, guest room, campsite, …
Unmissable to discover the Camargue traditions, the manades allow you to discover as closely as possible the breeding of horses and bulls of Camargue race, accompanied by the gardians. (the gardians are Camargue’s guardians)
The manades also offer you all kinds of “discovery” activities: horseback riding, pony rides, ferrades, Camargue evenings, tastings of local specialties, visits on towed carriages, etc.
The best way to discover the fauna and flora of Camargue. 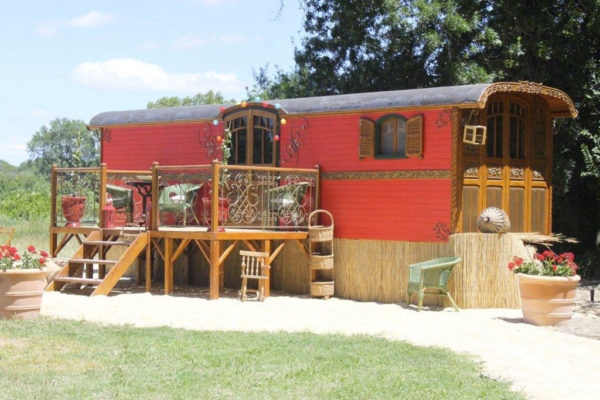 A traditionnal gypsy caravan to rent in Camargue

On the way to the Camargue!

Wild and tender, windy and warm, humble and proud, Provencal but also, she is a world to herself. Ideal for a small road trip of one or two days, radically exotic.

How to make better Business Relationship with French