At that time, French cinema is not yet truly recognized abroad and yet many very good films are produced and some actors have become real stars.

This film written and directed by Jean Renoir is considered today still one of the best movies in the history of French cinema. The film tells the story of the Marquis de la Chesnaye and his wife Christine, who organize a hunting party on their domain. André Jurieu, an aviator who accomplished the feat of breaking the record for crossing the Atlantic, is passionately in love with the marchioness Christine de la Chesnaye. Throughout the duration of the event, several twists will take place between the different pairs of aristocrats who will lead to a tragic accident ..
This film enables to draw up a picture of aristocrats and members of the upper middle class at the end of the 30s. 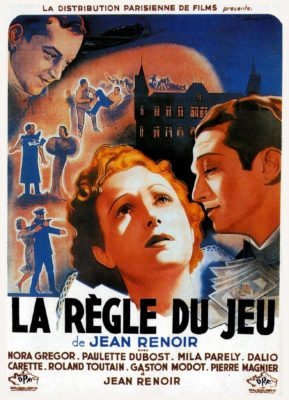 Directed by Henri-Georges Clouzot, Le Corbeau is inspired by a real event that took place in the 1920s: the Tulle affair. The story takes place in a provincial town where several people receive anonymous letters signed “Le Corbeau” containing compromising information about the recipients. One of the citizens is particularly victim of this scandal: Dr. Germain, who is at the heart of serious accusations of questionable practices including illegal abortions. Throughout the film, Dr. Germain will investigate to discover the identity of this mysterious character of the Raven.
Despite a negative opinion issued by the press about this film for political reasons, it still receives good criticism from the public.

This film, directed by Jean-Luc Godard, features actors such as Anna Karina or Jean-Paul Belmondo who are among the biggest names in French cinema. It illustrates the life of Ferdinand Griffon, a man who recently lost his job and leading a life a bit monotonous. One day, he discovers that the babysitter of his children is actually Marianne, one of his former friends. He decides to leave everything and go on the road with her towards the South of France. A crazy race that will not be easy, where incredible reversals will occur. This work by Godard is considered one of the first of the “road movie” genre and has been generally well received by critics.

La Maman et la Putain was directed by Jean Eustache, and is considered a masterpiece of French cinema. This film depicts a situation of love triangle between Alexander, a man who has lost some balance in his life; Mary, her lover, with whom he lives and on whom he depends; and Veronika, a nurse he met and whose attraction was mutual. He does not hide from either of the two women his relationship with the other, and they seem to accept the situation. Everything is going well, until relations between Alexander and the two women seem to be serious, and he will have to choose between the two. Often ranked in the top 3 best French films of all time by many filmmakers and other film buffs, he was awarded at the Cannes Film Festival. 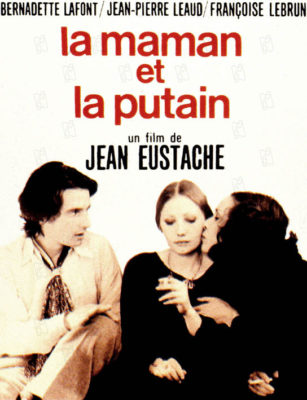 Although the early 80s wasn’t the greatest period for French cinema, several films will still manage to win at the box office and the film industry seems to be in a revival.

Directed by Jacques Rivette, this film tells the story of a group of four young women: Cécile, Claude, Joyce and Anna. The four live together and participate in the same class together. However, one day, Cécile leaves the community that the four young women formed to leave to live with a man, and is replaced by another young woman, Lucia. It is at this point that the situation becomes problematic: the women who stayed in the residence are each approached by a man who presents himself under a different name each time and seems to try to find out about Cécile. The young women will try to understand the dubious intentions of the mysterious man, which will not be easy. 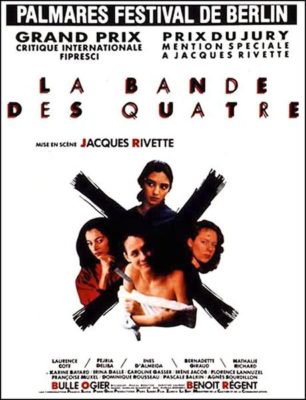 Directed in 1995 by Mathieu Kassovitz, La Haine is probably one of the films that has most marked a generation of spectators. The film depicts the lives of three young friends, Hubert, Vinz and Saïd in their city, on one day only. After a young man from their suburbs, Abdel, was the victim of an assassination attempt by a police officer, riots broke out between the suburban youth and the police. During these riots, Vinz finds the revolver of one of the policemen and decides to keep it to assassinate a policeman if Abdel does not come out unscathed from this story. The three friends with different visions try to understand each other and find the best solution possible.
This film illustrates and draws a picture of the life of young people in a suburb of France, what few film dared to do at this time. You can see the living conditions and sometimes the bad atmosphere. In parallel, this film has raised awareness and created controversy around police brutality against young people in the suburbs.
La Haine met with great success and was well received by critics despite these few controversies.

This film directed by Gaspar Noé was a bit risky. It tells the story of an ex-butcher who, as the title indicates, finds himself in a situation of loneliness in the society in which he lives after abandoning his daughter. He no longer feels in harmony in his life and with the people around him and his only company is his revolver. He is a man in full personal drift, full of resentment, hatred and a dark perception of life wandering from city to city to try to start from scratch. Having no contact with anyone, he finds himself confronted with his own inner chaos and his dark thoughts.
This work of Gaspar Noé has created a certain controversy and shocked several people, because of this almost monstrous main character and the mirror of a society doomed to fail it returns. Between confusion, anger and fear, this film is a work that knows how to create some discomfort but that still gives us the desire to discover more. 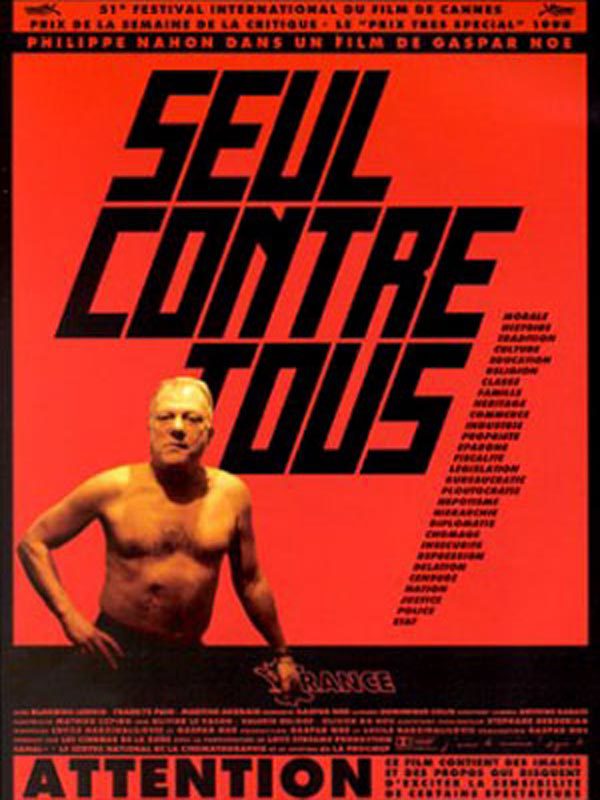 Les Amants Criminels is a film directed by François Ozon. It features a young couple, Alice and Luc, a couple that is somewhat disturbing. Indeed, Alice is a manipulative young woman. She is older than her boyfriend, who seems fragile, easily influenced and easily manipulated. Alice manages to convince Luc to commit murder by murdering Said, one of their classmate. There, the two young flee to the forest to bury the body. But their run will take a very strange turn. What if both lovers became victims in their turn?

In terms of success, these are perhaps the best years for French cinema! Finally France seems to be taken seriously by foreign filmmakers and French directors are recognized for their talent. Many successful films are produced, and more and more young filmmakers are emerging. The French leg seems to have seduced the world.

This film by Philippe Lioret tells the story of Elise, a young woman who returns from holidays and is confronted with a somewhat destabilizing situation: her twin brother Loïc, whom she is very close to, was thrown out by her father after a violent altercation between the two. Not knowing how to handle the situation, “Lili” as she’s nicknamed in the film, ends up making a stay in the hospital, between depression and anguish. It was then that a letter from his brother reached her giving good news, but that intrigued Lili. Several other letters are sent from different addresses in France. Lili then decides to lead the investigation herself, but what she will discover in the end is not as reassuring as what the letters suggest …
This very moving film received a rather positive reception and enabled to discover actors such as Mélanie Laurent. 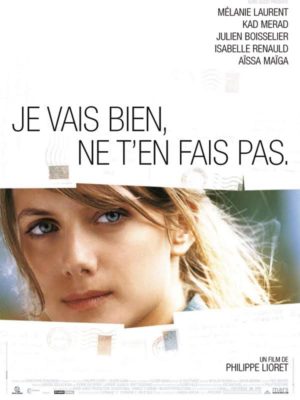 Ne le dis à personne, it’s the story of a relationship that had started so well and will experience tragic events. Directed by Guillaume Canet, he stages the life of Margot and Alexandre, a couple in love that nothing seems to disturb. And yet one day, they find themselves in an isolated place and Margot is murdered by a serial killer. Alexander has also been attacked, does not know what happened and has a lot of trouble recovering from this story. However one day, he receives an intriguing e-mail from an unknown contact, containing a disturbing video where we can see a woman. Alexandre is sure of it, it’s about Margot. At the same time, a murder was committed at home, and while he is suspected, he will try to flee and try to understand what is happening.

Directed by Jacques Audiard, Un Prophète depicts the daily life in prison of Malik, a 19-year-old sentenced to six years in prison. Due to his young age and his more fragile appearance, he was quickly taken under the wing of César Luciani, a Corsican mafia leader who has an influence on the entire prison. Malik becomes his handyman and will be entrusted with missions that will make him credible and will win the trust of Caesar and other Corsican. But in parallel, the Corsican leader will gradually begin to lose influence in the face of the rise of Maghreb inmates, while Malik will begin smartly to develop his own networks.
This film is a real commercial success. It was presented the first time during the Cannes Film Festival and received a very positive reception, both by the press and the public. It is therefore logical that he has been rewarded many times, including the Grand Jury Prize of the Cannes Film Festival. 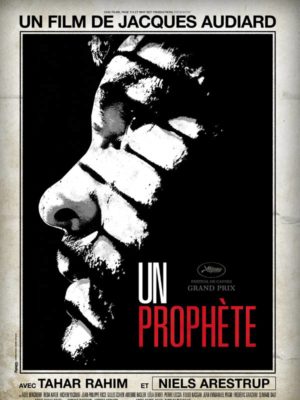 Another great Jacques Audiard’s film in this list. The film tells the story of Ali, a man leading a rather miserable life, ending up with his 5 year old son without money, without a home and without friends. He finds refuge with his sister in the South of France. There, he will meet Stephanie, a beautiful young woman embodied by Marion Cotillard to whom life seems to smile. However one day, she is the victim of an accident in her work in a water park and finished amputated both legs. It’s a little descent into hell for her who loses all hope and the positive vision she had of life before. It is then that Ali goes back to her to help him get out of it and teach him to love life again. The two characters will then build a relationship pure and simple, sincere and authentic.

Many other French drama films of all times have made the reputation of their director and have given all the beauty to the French film industry. Each year, new films come out and are praised by the critics, like Divines by Houda Benyamina in 2016 or even 120 Battements par Minute by Robin Campillo in 2017. More and more, the French cinema tends to be exported and to be well received.
Watching movies in French is also a great way to learn the language, so jump on the opportunity to discover the beauty of French cinema by improving your level!