Warning: fopen(/home/ofrench/tmp/style.instances-MLkLMR.tmp): failed to open stream: No space left on device in /home/ofrench/web/ofrench.com/public_html/wp-admin/includes/class-wp-filesystem-ftpext.php on line 185

Metropolitan France’s coastline is dotted with islands that each have their own identify and their own diversified attractions. We’re going to present the twenty or so biggest islands.

Palm trees, fig trees, jasmine, mimosas and mulberry trees, that’s the first impression that you get of Bréhat, a 300 hectare piece of colorful and exotic land. Thanks to its own microclimate, the archipelago’s biggest island, which bears its name and is often referred to as “the island of flowers”, features a variety of flourishing species, including the agapanthus, with pretty blue petals. Walking on foot – as the car is forbidden – it is easy to understand why Enez Vriad – the island’s name is Breton – was, in 1907, the first listed natural site in France. While the southern half of the island enjoys a mild, almost “tropical” setting, the northern half features a more unbridled versrion of nature, with landscapes of pink granite that are reminiscent of the Breton coastline that bears the same name. 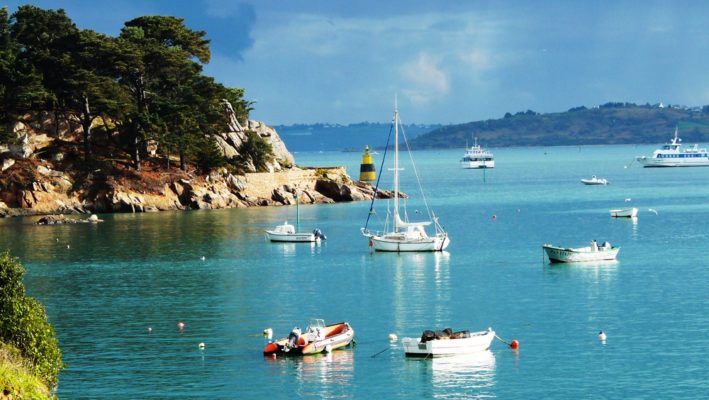 Referred to as the pearl of the Golden Islands, Porquerolles is a tiny treasure nestled in the heart of the Gulf of Hyères. Extremely well preserved since it is listed as a Heart of National Park, this island is a magical place. Its landscapes will take you from beaches of fine sands to an incredibly clear sea overlooked by steeply falling cliffs. Creeks, canyons, small mountains…the coast offers unbridled and grandiose panoramas.

On the ground, Porquerolles is populated with pine, olive and numerous fruit trees, creating a superb perfumed aroma. 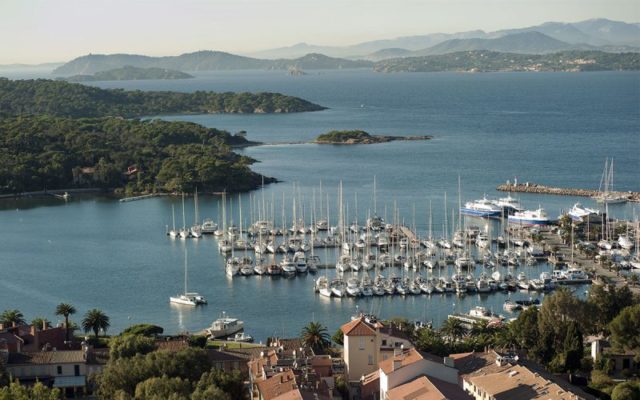 The largest of all Breton’s islands and somewhat of a legend in the South of the region, Belle-Ile is an exceptional setting, which is only confirmed by its name. This superb 85km plateau is full of breathtaking and eclectic landscapes. With its rugged cliffs, moors, well-preserved dunes and rural trails, there is nature everywhere and it is quite the show. The beaches of fine sands and turquoise waters form small intimate coves in the heart of wild brush.

Belle-Île is also composed of small, well-preserved and photogenic ports like Sauzon or Le Palais featuring the architecture of the period. It also boasts many natural ports where a ship can be anchored to take a trip on land.

This Breton jewel enjoys a very oceanic climate, especially in terms of sunshine, despite its mild temperatures, which allow for the development of beautiful Mediterranean plants. 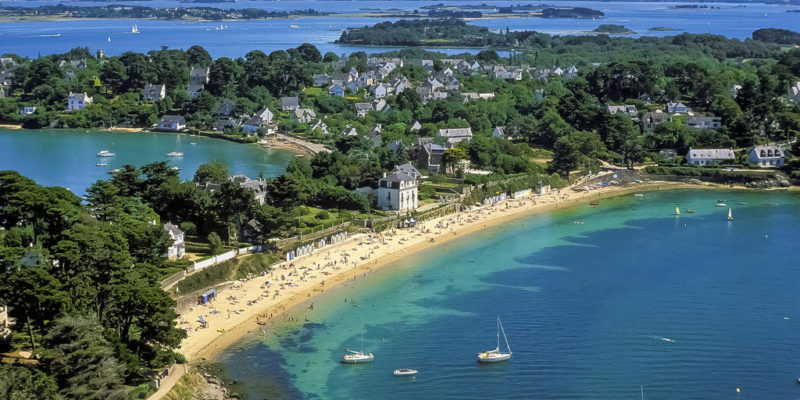 The island of Noirmoutier, nicknamed the mimosa island, is a real seaside paradise for nature lovers. Its 40 km of beaches offer a hosts of aquatic activities. Renowned for its blue salt marshes, Noirmoutier is a haven of peace between pine forests, sand dunes and small intimate coves. 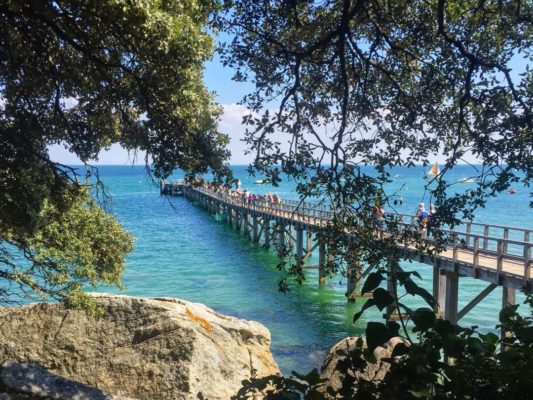 The Island of Ré

The island of Ré is above all a series of small villages, all of a sheer white color, which directly contrasts the hollyhocks that lounge the walls and the narrow streets all along the Mediterranean side of the Atlantic coast.

This island is also home to salt marshes, moors, vineyards and long sandy beaches that make for a beautiful setting. The small fishing ports only add to the Island’s postcard-esc setting. If bikes are privileged on the ground, the aquatic side of the island of Ré makes for an excellent playground. Its climatic conditions are perfect for nautical sports such as surfing, kite surfing and sailing. 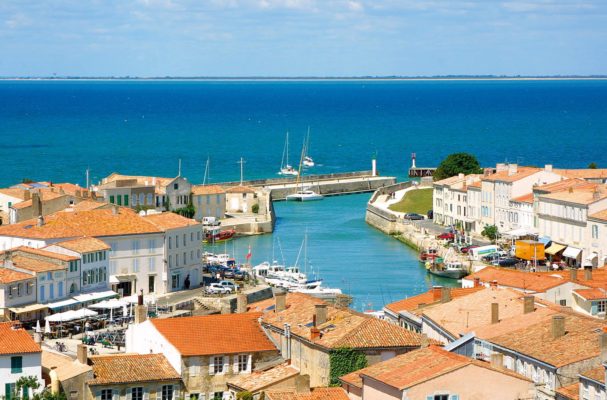 The Island of Ré

The Islands of Lérins

Directly facing the bay of Cannes and the Esterel mountains, the islands of Lérins, Sainte-Marguerite and Saint-Honorat offer a change of scenery that is worthy of the Caribbean. Its waters are pure and turquoise, ideal for dropping anchor and enjoying this setting right out of paradise.

These two islands are still very well preserved. Sainte-Marguerite features a superb forest of pine and oak tress, which leads to the beautiful Batéguier pond, perfect for a peaceful moment. You can also explore remnants of different civilizations. The mysteries of the Iron Mask can be explained by a visit though its former home, the Royal Fort. Although the island is almost completely covered by the national forest parks, a well-maintained path and criss-crossing roads allow that allow for the full exploration of the island and the possibility of accessing the small coves on the southern coast.

Saint-Honorat, six times smaller, is home to the Lérins Abbey , where a small community of Cistercian monks still reside. Visitors can taste the different local products, like their honey or their wine. There also a path visitors can take that goes all around the islands, crossing beaches where you feel like you are alone in the world. 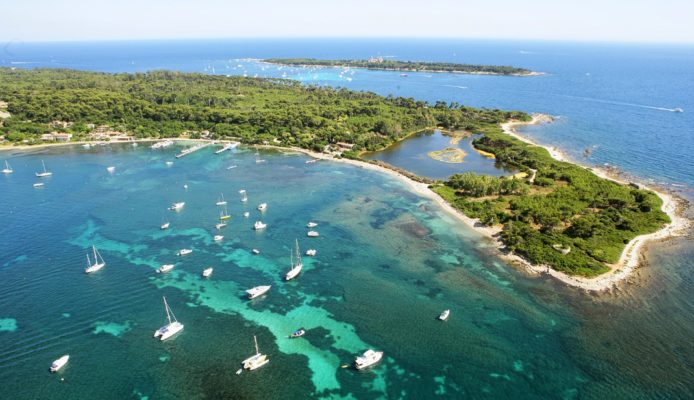 The Islands of Lérins

Located off the Bay of Mont Saint-Michel, the Chausey Islands are the largest archipelago in Europe. In Chausey, people live according to the tides, which can change the number of islands from 52 to 365!

Its nature is totally protected: it is a preserved area with splendid landscapes, which are constantly evolving. There are very few buildings on the island, other than a few houses, an abbey and a small castle. There are however a plethora of idyllic beaches on Chausey, each with very fine white sand and pure, clear water. 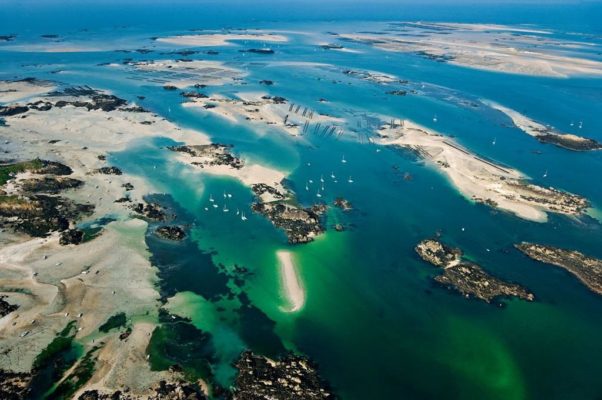 The Island of Yeu

A small island located off the Vendée coast, the island of Yeu is not lacking in charm! It’s 23 km² surface area contains a great diversity of landscapes. Be they long beaches, coastal dunes, coniferous forests, overgrown coast line or small coves of golden sand, everything is blended together to make for an idyllic setting.

The Island of Yeu is a perfect blend of Breton and Vendean landscapes: the coast starts off as rocky and overgrown, dominated by a moor, just like those that are famous in Breton. Next a dune comes along with softer lines, followed by a succession of beaches with a backdrop of pine tree forests. 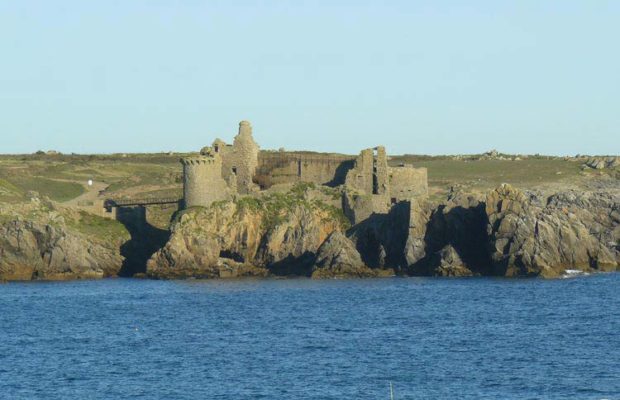 The Island of Yeu

The Island of Aix

This southwestern French island, located in Charente-Maritime, was Napoleon’s last stop before his exile to St. Helena. Suffice to say that there is more than enough history to the island. It houses the former residence of the emperor, which has since been converted into a Napoleonic museum.

More than 200 years later, the presence of the Emperor still hangs over the island, but that is not all that it has to offer. The crescent-shaped island also draws visitors in by the majesty of its landscapes and it also happens to be classified as a remarkable natural site.

The Island of Aix

The island is famous for many things, including its very green natural landscapes, its coves, its wild coasts, its seabed and its rocks, which have been carved by the sea. The island’s 95 hectares host more than three hundred species of flowers and fruit, including some preserved wild species like Aleppo pines, arbutus, succulents, vines, flowers, shrubs and bushes, not to mention its majestic oaks.

Just on the island of Embiez alone, there is 90% of the known Mediterranean plant species and a protected refuge for birds which has been recognized by the League for the Protection of Birds. The island has also earned the “eco-label” Blue Flag for it’s commitment. 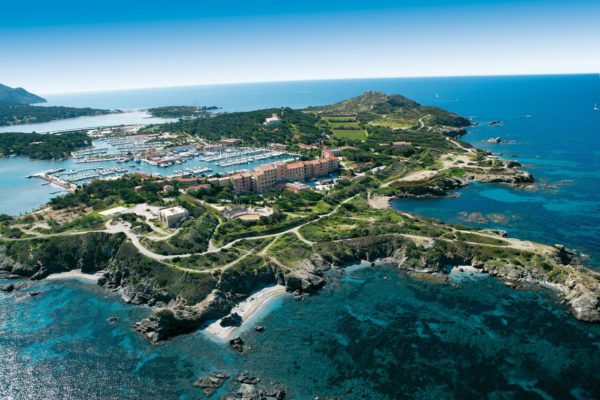 The 11 Best French Soccer Players of All Time

The 11 Best French Soccer Players of All Time