Renaud Séchan, referred to Renaud is one of the most popular singers in France. In his songs, he uses revolt, tenderness and humor to criticize society, pay tribute or simply have a good time, all with very personal lyrics, where slang holds an important place.

Renaud Séchan was born on May 11, 1952 in Paris, the middle child in a large family. He has a twin brother, David, as well as four brothers and sisters. His father, Olivier Séchan, from a family of Protestant intellectuals, is a German teacher and writer (he received the Deux Magots prize in 1942 for Les corps et soif). His mother, Solange, a miner’s daughter, used to be a labourer, before devoting herself to her family after her marriage. As a young boy, he takes music theory lessons, encouraged by a music -loving father, but gives it up after a few months. As a teenager, he sometimes replaces his father behind the family typewriter, but despite his aptitude for letters, he also ends up abandoning his studies. His older brother, Thierry Séchan, will be the one who will take over the paternal torch by publishing several books in his adulthood.

In 1969, Renaud drops out of school and confronts real life, finding a place as a salesman in a Parisian bookstore. Thanks to Patrick Dewaere, he gets a gig playing every night at Café de la Gare, where he gets the opportunity to go on instead of a comedian at the last minute and ends up becoming friends with Coluche. Encouraged by Coluche’s producer, Paul Lederman, the young singer, who’s music is centered around activism and revolution is noticed by two producers. In 1975, he published his first album, Amoureux de Paname. However it is his second work, Laisse béton, in 1977 where he finally reveals himself to the general public. The singer develops quite an audience, seduced by the slang and his slightly thuggish look, with his bandana hung around the neck.

The 80s marked a turning point in his personal style, as he started writing lyrics that were inspired by his personal life. A prolific singer-songwriter, he goes on to publish numerous albums; Ma gonzesse woman in 1979, Marche à l’ombre in 1980, Morgane de toi in 1983 and Mistral gagnant in 1985. His friend Coluche’s fatal accident also inspired the album Putain de camion (1988). In 1993, the singer interpreted traditional songs from the Norther region on his Renaud cante el ‘Nord album, which earned him a victory as the traditional album of the year. That same year, he reverted to his first vocation and stepped into cinema, appearing in the film Germinal, by Claude Berri. After an album with Georges Brassens covers, named Renaud sings Brassens (1996), the singer retires from the stage. 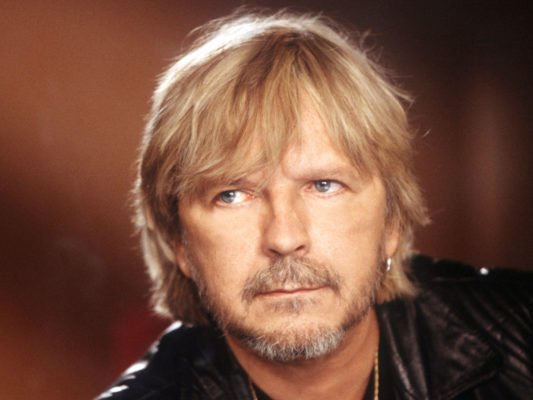 The artist goes into an alcohol fuelled depression for several years. In 2002, he found redemption with his album Boucan d’enfer, which topped sales with over two million copies sold. It also won several awards (Best Artist, Best Album and Best Song for Manhattan-Kabul at the Victories of the Music in 2003). He does it again with the double album Rouge Sang. His take of Irish songs, Molly Malone, got a mixed reception. In November 2010, Renaud publishes a best-of of his 35-year career’s greatest hits (Le plein de super). In 2014, a collective of several singers among whom Jean-Louis Aubert, Raphael or Benjamin Biolay, reunite to write a tribute album, Renault’s band, which reinterprets the artist’s greatest successes. On February 10, 2017, Renaud accepted the award from Victoire de la musique for Best Male Artist of the Year.

In terms of his private life, Renaud’s oldest child, his daughter Lolita, was born in August 1980, from his union with his first wife Dominique. The couple would however split up at the end of the 90s. In 2000, the singer would meet a younger colleague, Romane Serda, whom he married in August 2005. On July 14, 2006, the couple welcomed a little boy named Malone. Their divorce was finalised 5 years later in September 2011.

A down to earth man who knew how to stay true to himself, Renaud has always been humble. A passionate revolutionary and committed activist, he is gifted with a pen, at times using direct poetry while other times figurative elements, both of which are often hits. This big fan of Hugues Aufray and Antoine (French composers), takes listeners on a journey t through his lyrics, sharing both his light and dark side to the audience, focusing on his own demons, his melancholy and his addiction to the alcohol, which he does his best to kick.

Strong, witty and at a sometimes impossible frequency, the slang that make this artist’s work so famous embody a remarkable literary finesse behind the content’s violence. It is undeniable that the language used by Renaud is of an appealing richness. This charm is straight out of the French proletariat playbook, a gift from the previous generations, which Renaud has a healthy dose of. The combination go the De Gaulle generation, military-industrial complexes, physical boundaries and the French model of assimilation to the French could only leads to groans from a world citizen such as Renaud. Despite this, the artist will ironically start to sound just like them.

A Career That Evolved With French Society

Entirely unaccessible to non-French speakers, Renaud’s fame will never reach the international popularity that singers such as Joe Dassin or Claude François may have built, perhaps in part because of his refusal to follow suit with the growing Americanization that his peers adopted (he has never sung in English). It could also be because of his constant defiance of the consumer society, which is one of the elements that fuelled his revolutionary spirit and its unconventionality. A good example of this is the violent anti-Thatcher passage in his song Miss Maggie. Independence and provocation were his primary features: the classic French attitude, in the end!

Be they colorful characters that call the 1970s-built public housing home, to the more well-off, “living in beautiful neighborhoods, or suburbs, but in a loft”, the artist’s pen, never failed to denounce, with great talent, the superficiality and selfishness that was starting to gain popularity across the country. Often critical, Renaud nevertheless never forgets to leave clues to how much he cares for the country in his songs. This became the theme of his career: this French society, which he has much criticism for, but nevertheless loves passionately. Always in tune with his country, he would go on to join, then leave the left in terms of politics, harshly criticise the war in Iraq and mourn the dead of Charlie. Forever bound to the fate of France, who’s story, like his own, is far from over.

It was the period of May ’68, that’s when it all started. His godfather offered him a guitar, and Renaud decided to re-interpret his lyrics and poems and put them to music.

Renaud presents us with a harsh criticism of French culture, sparing no detail, including the French who go on holiday in Spain and spoil the landscape, the death penalty (which was still applicable at the time), and collaborators under Petain. He even rails on holidays, especially special holidays, wondering exactly what there is to celebrate, as nothing really changes.

The song “Hexagon” was actually banned from the French radio France Inter, which was a promising start.

Renaud’s first ever released single, the song bears the same name as the album from which it comes and tells us the story of a “quiet and pampered” guy, who was well dressed. One by one, his clothes were taken off of him, as he was mugged, again and again, despite his resistance. It is one of those street songs where Renaud likes to use verlan (or slang) often.

The song, off the album ‘Morgane of you’, tells of a time when Renaud was building his own boat. During a dinner, he expressed his desire to take off to his friend and actress Dominique Lavanant, to which she responds: “It is not man who takes to sea, but the sea that takes the man.” This was a referral to her father, who drowned when she was only 2 years old. The song is also a tribute to Hugues Aufray, one of the artists that Renaud loved so much.

Yet another of Renaud’s gem, this song, whose title is inspired from the name of a popular candy at the time, is dedicated to his daughter Lolita , who was born 5 years earlier from his marriage to the woman he always considered as ‘the woman of his life’, Dominique Quilichini. The singer expresses melancholy for the candies that an entire generation cherished, both during childhood and even beyond. Renaud felt that it was too personal and was not sure to put it on the album. He would later tell the story in an interview, when he called his wife Dominique from the studios in Los Angeles where he recorded, to sing it to her.

In this song, Renaud is speaking to his friend Coluche, godfather to his daughter Lolita. Indeed, in 86, all of France had to deal with terrible news: Michel Colucci, alias Coluche, the comedian and inventor of the Restaurants du Coeur, dies in an unfortunate road accident. Renaud was terribly marked by his friend’s disappearance and a few days later, he writes “Putain de camion”. This piece, which was not supposed to appear on the album, which also bears a title in tribute to Coluche.

Renaud was not a fan of school and makes it clear through this piece. This song, from the album “À la belle de mai”, is meant to be a children’s story, only it takes full consideration of reality and the adult world.

This piece is, once again, a criticism of modern society, with the focus on the brainwashing that goes on in school, which according to him, was lacking in apprenticeship, an essential life skill.

Very similar in style to Gainsbourg Gainsbarre or a Doctor Jekyll and Mister Hyde, Renaud focuses on the ambivalent side of his personality. On one hand, he’s a gentle dreamer, kind and loving, a man so sensitive that he soaks up the evils of this world. On the other hand, we find the alcoholic, joint smoker who just doesn’t care and prefers to get high by slowly destroying himself with ricard.

Renaud wrote the lyrics for this song in minutes on the recording studio’s console stables. He was intent on making it a duet and selected his compatriot Axelle Red, whom he admired a lot at the time, to play the role. He decided that his theme should highlight the collateral victims of war, the poor souls who did not deserver their fate, entrapped by the madness of men.

After many years of absence, the Grand Corps Malade gave Renaud another taste of writing and pushing through the song “Ta batterie”, which made him want to go back to work. This track is dedicated to his son Malone, who was born 10 years earlier from his marriage with Romane Serda.

Please fill the required fields
Send Message
Login
Sign up as a Student or Sign up as a Tutor
Sign Up
Already have an account Login? Login
Close
Do you want to read more similar stories?

Do you already like us on Facebook?
Do not ask me again for Facebook
Continue to the article »
x
X
×
We use cookies to ensure that we give you the best experience on our website. If you continue to use this site we will assume that you are happy with it.Ok