Warning: fopen(/home/ofrench/tmp/style.instances-joQod8.tmp): failed to open stream: No space left on device in /home/ofrench/web/ofrench.com/public_html/wp-admin/includes/class-wp-filesystem-ftpext.php on line 185

Twelve million visitors flock to the Palace of Versailles each year to discover its secrets. But only a few of them will discover all of the hidden oddities that are to be found below….

This is the juiciest hidden treasure of all of Versailles – which is closed to the public – and was created right after the fall of the Bastille. Imagine yourself in the King’s Room. It would have been occupied by Louis XV, and then by XVI. You discover a small door which is barely visible, perfectly blending into the wallpaper and the moldings. You are handed a small key to open it, as this hidden room is absolutely not open to the public. It is far too small and too fragile to welcome the millions of visitors that flood through the rest of the site, especially since it was recently renovated with great success thanks to the pratonage of Lady Michelham of Hellingly. 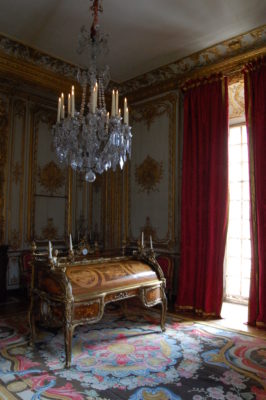 In reality, this was Louis XVI’s private closet, which he put to use as an office. The unfortunate monarch was not able to take advantage of it for long as the room as only set up in the spring of 1789, only months before he was expelled from the palace by a revolutionary mob. In June of 1788, he orders his architects to transform the closet next to his room into a work cabinet. The surface area is doubled to about 13 square meters, as was the height, in order to create a mezzanine. It was equipped with two windows that directly overlook the cours de Cerfs.

Did we surprise you yet? If not, wait, because it gets better. Towards the end of the XVIII century, this room was filled with new technological feats. One might find an electrical machine, composed of a glass disk, who’s rotation was used to create static electricity. A bit further, there was an alidade graphometer (to measure angles), a vacuum pump and a crane. Do you have a pressing need? The king was only satisfied with English style sanitary installations, composed of a toilet with a drain and a flushing mechanism. The installation is hidden away behind a door in the woodwork. There’s not enough room for your whole body, the the King could only sit on it if he left the door wide open.

She was known for her excessive exuberance, but did she really take it that far? Believe it or not, it’s true. Marie-Antoinette had her very own village at the Palace of Versailles. In 1783, Marie-Antoinette, who was tired of her life at Versailles, orders the construction of a veritable peace haven, less than 2 km from the main castle. This village, built in the classical French rural style, was baptised “The Queen’s Hamlet” and was built piece-by-piece. It allowed the Queen to escape from the rigorous pace of life at the Palace. Even if just for a moment, she could travel to a farm, a barn, a dairy farm or a playground, among other installations. She also wanted to reconstitute the farm, complete with animals and farmers, not too far from the main grounds, so that her children could learn about nature. Her secret paradise eventually became destined more for long walks and luxurious galas with all her close acquaintances. 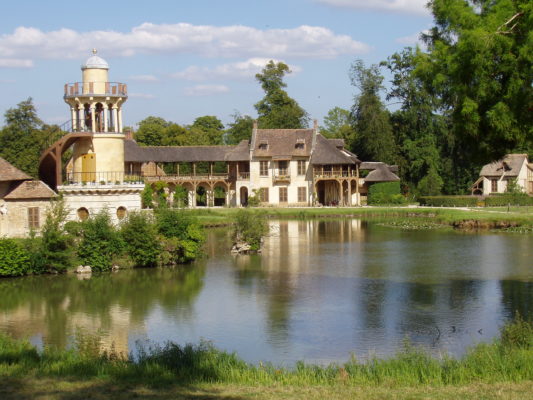 While from the outside, the village might look rustic and simple, the inside was anything but. In order to be more accurate in terms of the reproduction, many of the rooms were entirely re-furnished. The prestige that comes along with the monarchy is obvious in Marie-Antoinette’s choice for decor in her house, including electric, golden lanterns. The renovation work took five year, in which time each room was completely restored, even the frames were renovated. The hamlet, which is located in a humid zone, has obviously deteriorated since that time. Numerous experts in restoration were required to return the Queen’s secret paradise to its former glory. 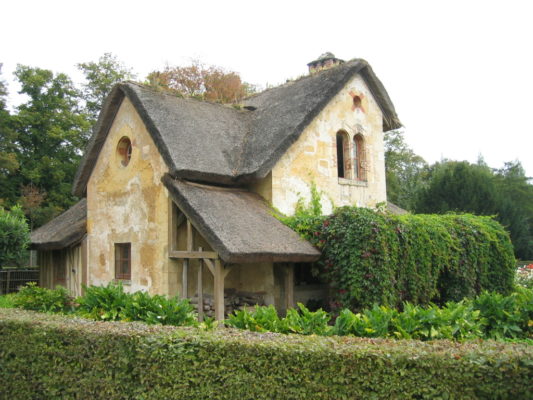 The Queen’s Hamlet had always been out of bounds for visitors. After three years of work, it opened for the first time to the public. For two centuries, this masterpiece was exclusively reserved Kings and Queens. Now they will be joined by the more than 7 million annual visitor to the Palace of Versailles and its gardens.

The gardens of the Palace of Versailles…just at the sound of the name, the dreaming stars. Listed as a World Heritage site since 1979, this is the ultimate symbol of the monarchy and of the French flair that the entire world has been envious of for as long as we can remember. The work of gardener and architect André Le Nôtre, it impresses millions of visitors every year with its geometric patterns and remarkable views. 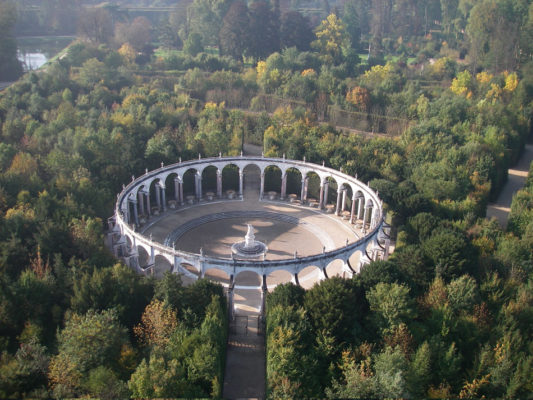 Less well known, the groves are also a part of the carefully maintained decor. They were often used by Louis XIV and his court for dancing, daydreaming or simply taking walks. The groves form a naturally closed garden, away from the gazes of others….There are fifteen of them in the gardens of the Palace of Versailles. Each one has its own special characteristics and secrets: there’s one for the Queen, one is a ballroom, the candlestick grove and even one for the King’s eldest son… 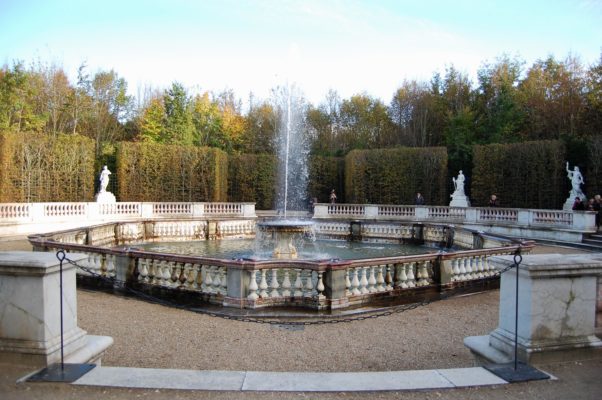 This work of art, which stretches over 800 hectares, has no less than 200,000 trees and just as many flower species are planted every year. It also have 300 statues and around 50 fountains. It’s enough to get lost for a while!

Since 2011, the Palace of Versailles has organised a Great Masked Ball every summer. 2,300 participants are invited to this exceptional night out! After the nighttime fountain show, when the castle starts to wind down for the night, imagine if someone were to ask you to stay and danse until sunrise in the domain’s orangery?

This masked ball lives up to the most excessive of royal parties. Costumes from the period, wigs, champagne and all of this in a night club like atmosphere. Dancers, performers and artist regularly appear during the ball to increase the fun. A high quality, baroque costume is required to get in (each person is responsible for their own costume, using whatever means they prefer). To gain access to the orangery, your face must be masked and remain so for the entire night. 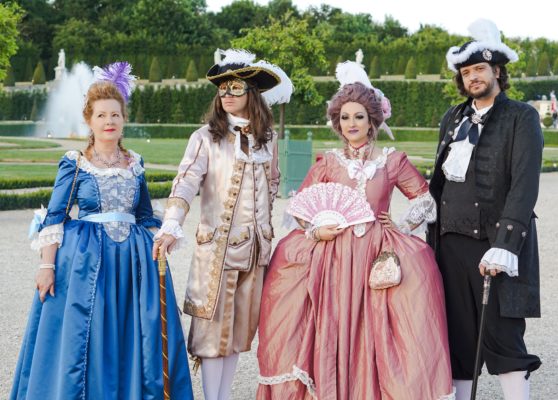 This event brings together party lovers from Paris, Versailles, the South of France and abroad. From 23h30 to sunrise, participants engage in a champagne filled night that fulfills their fantasy, while still being refined and of course, unforgettable.

In terms of the show, the dancers, the performers, the costume designers, lighting staff and special guests work a feverous pitch to put on a show that last about 6 hours. The event’s artistic directors try to have a performance every 30 min. In 2018 for example, acrobats swung from one end of the room to the other, putting the orangery’s space to full use. The event’s theme is straight out of a fairy tail: Pirates v. Privateers, La Fontaines fables, the Versailles Parade and the Freaky Circus Show. The latter featured a contemporary circus with musicians of all types. The other special guest was DJ and producer Michael Canitrot, who orchestrated from a neon lit stage with a backdrop of a sphere composed of lasers. This is the same DJ that spun for the evening at the Louvre Pyramid, Emmanuel Macron’s victory event when he was elected President of the Republic.

To attend the Masked Ball, each participant must shell out anywhere from 88 to 300 Euros, depending on the options that are selected. The most popular options are the Night time fountain show, where the palace gardens are showcased with a combination of water and light. Towards the end of the night, near sunrise, the ballroom grove will take center stage to hose the all nighter experts for a promising after party.

You are now more informed that the average Palace of Versailles visitor. We hope these hidden treasures will allow you to take full advantages of the royal pleasures while your friends are eating like peasants…why not during the Great Masked Ball!

Common words we use when Driving Cars in Quebec French

Wait… What is French Touch ?