Initially named the 300 meter tower, Eiffel designed the monument as a testament to contemporary science. It is located at the far side of the Champ-de-Mars, on the edge of the Seine.

History of the Construction

For the World Fair of 1998, organized to mark the hundred year revolution of 1789, the fledging republic wanted to make history.

They would launch a great contest in the official newspaper, putting any willing engineer to the task of “building an iron tower of a square base, 125 m wide and 300 m high on the Champ-de-Mars.”

Out of 107 submitted projects, the jury selected the one designed by Gustave Eiffel, along with engineers Maurice Koechlin, Emile Nouguier and architect Stephen Sauvestre.

Gustave Eiffel would go on to sign a contract with the government on the 8th of January 1887. The project featured an extraordinarily ground-breaking technique for the time period. Its conception would require 5300 sketches, realised by 50 engineers and design artists. More than a hundred workers pre-fabricated over 18,000 pieces in a shop, while 132 others worked on-site to build the monument.

In 1989, Eiffel installed a laboratory at the top and a few years later, in 1901, a permanent radio transmitter. The tower, which was used for numerous scientific experiments, still serves to this day as a transmitter for radio and television signals. 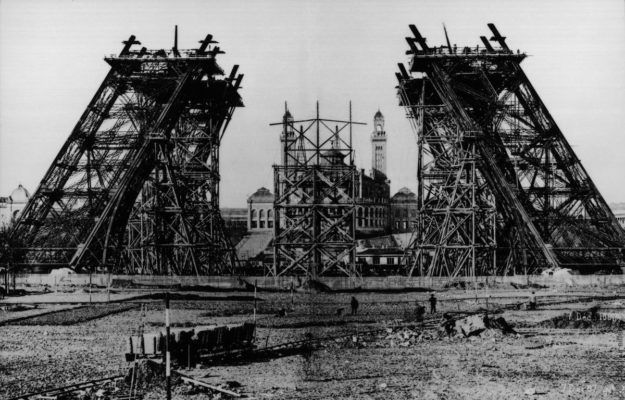 The inauguration of the Eiffel Tower

The Eiffel Tower’s inauguration was held on the 31st of March 1889, right after the end of the metallic structure’s construction. The workers were still working on it, but only to install the various machines, elevators and different finishing touches here and there.

The most important part, the frame, was complete in time. At the very tip of the tower, the base was ready to receive the tricolour flag, the official symbol of the inauguration.

Although it may seem obvious, the Eiffel Tower plays a huge role in supporting scientific progress. Just think about it, where else but Paris can one access a metal tower, over 300m tall, with such an imposing mass? Such a structure is bound to be a beacon for scientists, who took advantage of its size to conduct experiments for which no tool existed, almost as soon as it was constructed. Care should be taken to distinguish between the experiments and the applications. The experiments had for sole goal to advance the field of science, while the applications used the Eiffel Tower as a support for providing various services.

Alexandre Gustave Bonnickausen, Gustave Eiffel for short, was born on the 15th of December 1832 and died in Paris on the 27th of December 1932. In 1852 he was accepted into the Central School for arts and manufacturing in Paris, where he obtains an engineering degree in 1855. His first success as an engineer came when he built a track bridge in Bordeaux in 1858.

Gustave Eiffel is also well-known for having been a contributor to the Statue of Liberty in New York and having helped build the Briare canal (1896). 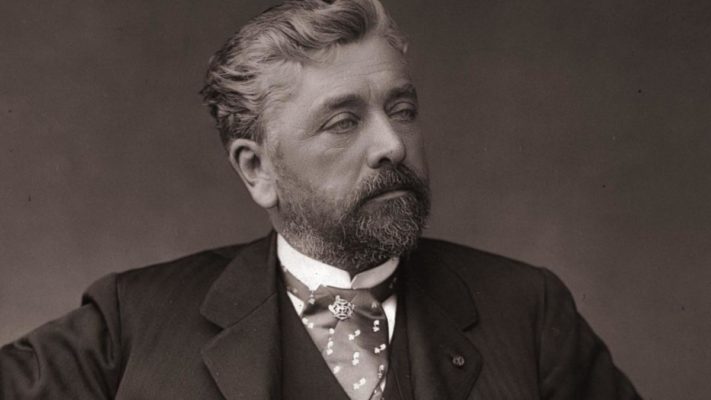 What is there to see on the Eiffel Tower?

Visiting the Eiffel Tower isn’t just about going all the way up to see the sights, pretty as they may be.There are a number of very interesting attractions to be seen inside the tower as well. These are most often linked with the history of the tower, its construction and the challenges that the builders faced, but they also shed some real light on the context of the industrial revolution, especially when compared to other worldly monuments. These tourist attractions are spread out throughout the tower’s different floors, so depending on the route you take, it’s not always possible to see it all.

The ground floor of the Eiffel Tower

The Eiffel Tower’s parvis, or ground floor, isn’t that interesting in itself, since it is basically just a large slab of concrete where vehicles are not authorised. The real draw of this space is the fact that the first floor attractions are visible. They are 50m higher up, so you can also see the plate glass windows that are slightly angled so as to be perched above the crowd below. From this vantage point, you can also see the stairs that lead to the first floor, affording you the time to ponder exactly how much effort is required to get up them, as well as the two elevators, positioned at the east and west ends. Other than that, the parvis is not that interesting, and is often frequented by numerous street vendors. It doesn’t have any historical signs and no attractions for kids. 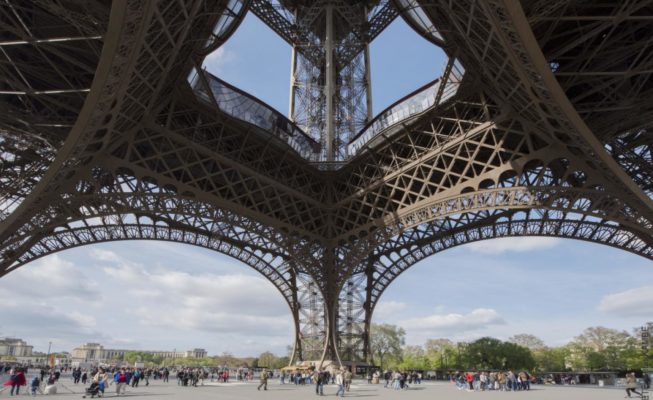 At the food of the northern pillar, there is a bust of Gustave Eiffel. It is golden and very life-like, matching the surviving photos from that time period. It is placed atop of a 2m high pedestal, a sort of square shaped column. It is, for all intensive purposes, the only tourist attraction within the Eiffel Tower that is free to access, open to all at the base of the monument. 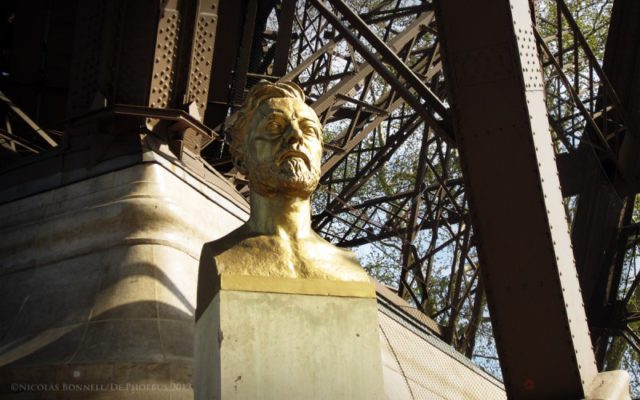 In each of the two pillars, which is host to an elevator, there is a panel displaying a machine from 1899. It’s one of the motors which was eventually replaced by more powerful, modern machines in the 1980s. This is not an original machine however, but a machine that was installed in 1899 when the Eiffel Tower was renovated for the 1900 World Fair. The machines were in operation until the end of the 20th century. 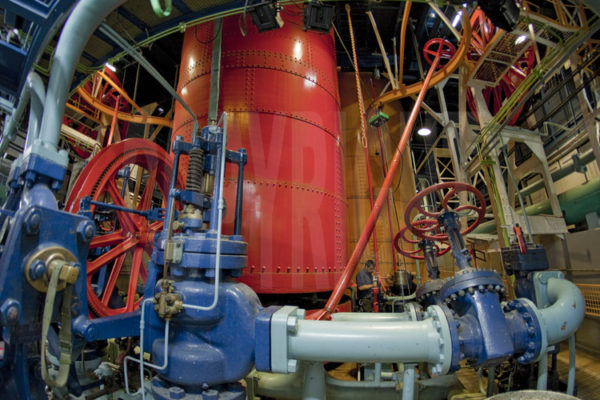 As there are very few touristic elements on the ground floor, it’s important to soak in the few attractions that are actually present. One of the main ones is the elevators’ installation.

The elevators are located in the east and west pillars, although there is another one in the south pillar which is reserved to clients of the 2nd floor restaurant, the “Jules Verne”. Once inside the pillar, the 3 tanks that are used as counterweights for the elevators are also visible. The two yellow ones are actually in operation, while the third one has been out of order since the pulling mechanism was updated in the 1980s. The sight of these tanks slowly moving up and down, depending on the elevator’s location, is nothing short of curious. You can witness them slowly leaving their support, only to revert back to it later, before the whole cycle starts over. This mechanism is still the same today as it was during the construction of the tower. The most impressive part is the size of the tanks, which are 3m in diameter and 5m in height. 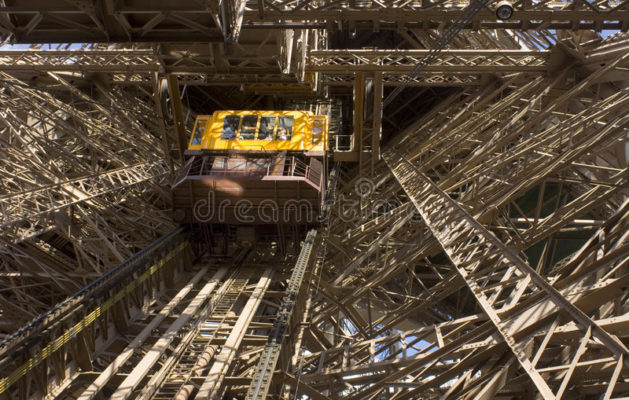 The first floor is the most modern of the three. Renovated in 2011, it has the advantage of being equipped with new facilities and a finish that is still stylish to this day. Everything is streamlined, but that is far from the most interesting part.

Located exactly 57 meters from the floor below, the 4220 square meter structure can support the weight of about 2500 people at the same time. A circular gallery goes all the way around the first floor and allows visitors to take in 360° views of Paris. It is dotted with several tables that have been strategically placed to overlook long views and Parisien monuments. The outside of this floor is engraved with the names of sixty two leaders in science in the 18th and 19th century, in gold lettering. The first floor is host to Restaurant 58 Tour Eiffel, which extends over two levels. It offers panoramic views of Paris of one side, and on the other, a look at the inside of the tower. 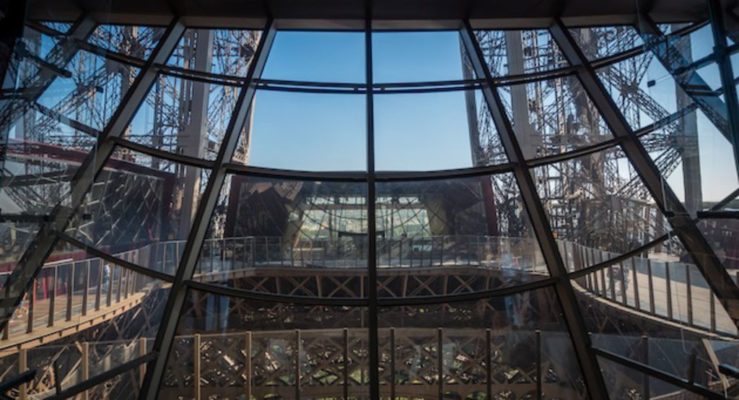 Located 115 meters above sea level, with around 1650 square meters of space, this floor can support the weight of 1600 people at the same time.
This is the floor that offers the best views. The altitude is optimal in terms of the buildings in the background and the general perspective. Dotted throughout the floor, glass portholes provide a plunging view down below. Just in case, irons grills are installed all around the perimeter to prevent any attempt to jump off, be it for an attempted suicide or a sporting dare.

This floor is also the most commercial of all, where most of all the shops are located. Just like the 2nd floor, the 3rd extends over two levels, with different stairs that allow visitors to go from one to the other. 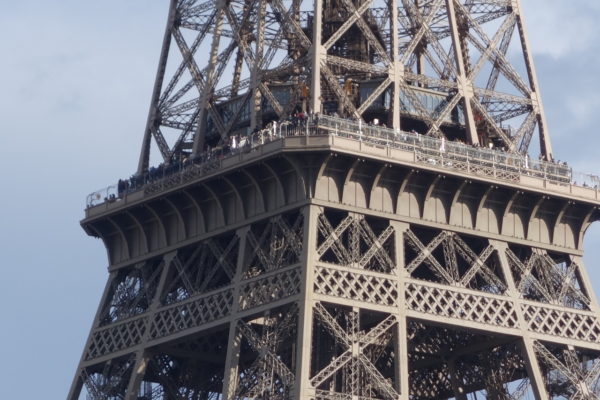 The intermediate floor is a “ghost floor”, located between the 2nd and 3rd floors. It is unused in modern times, despite the fact that it does still exist and that you can physically go there. The elevator doesn’t stop at this floor normally. The lift operators do have the option of stopping there, although they never have any reason to do so. 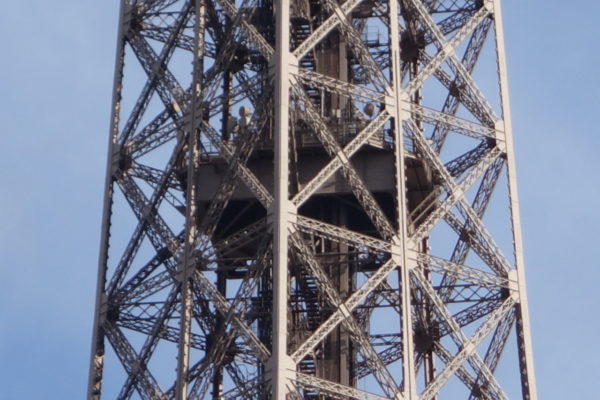 Located 275 meters above sea level, with 350 square meters of available space, the third floor can accomodate up to 400 people at a time.

Access is only available via an elevator (the stairs are off limits to the public after the second floor), which opens into a closed off space, where observation tables are installed throughout. By scaling a few sets of stairs, visitors can access an outdoor platform, sometimes referred to as the “fourth floor”.

This floor features a wax-museum style reconstitution of the meeting between Gustave Eiffel and Thomas Edison, which implies that Gustave Eiffel might have used the local as an office. The actual story is different. The space was first used as a meteorological lab until Gustave Ferrié used it in 1910 to conduct his radio wave experiments.

That’s not all there is to see on the third floor of the Eiffel Tower. Visitors can also enjoy an informative plate which explains how the tower was inaugurated in 1889, access to the technical installations at the base of the tower, the stairs leading up the Mr. Eiffel’s office and the many dishes that are perched all around the tower. 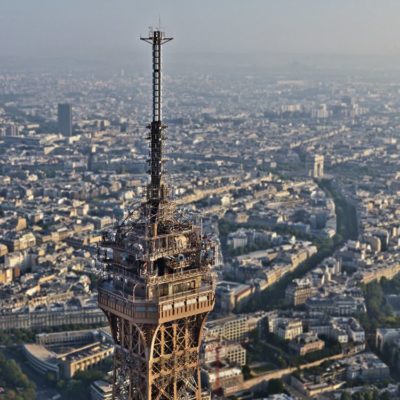