Paris is a gold mine, you never know what you are going to fall around a walk or change neighborhood. The proof with these 10 unusual steps to discover Paris under a new eye, away from the Eiffel Tower, the Champs Elysees or the Louvre Museum.

The Garden of the Buddhist Pantheon

Behind the Guimet Museum (National Museum of Asian Arts) hides a secret well hidden, a majestic Buddhist garden that will take you directly to the Land of the Rising Sun. In this relaxing garden of 450 m2, you will be filled with zenitude between bamboo, stone slabs and tea ceremonies.
Whether you’re looking for greenery and coolness in the summer, or just a bit of calm and solitude, the Japanese Garden at the Guimet Museum is the place to be.
It is truly a three-dimensional plant painting, reflecting all the art of landscaping in the pure Japanese tradition. It is to reproduce and idealize nature by associating perspectives, simplicity and symbolism.
A one-way trip to Japanese exoticism!
And icing on the cake, access to the Pantheon and this charming garden is free. A good idea to relax after a shopping / metro session.
To discover it you will have to cross the rooms of the ground floor of the Guimet museum located at 19, avenue d’Iéna 75116 Paris. 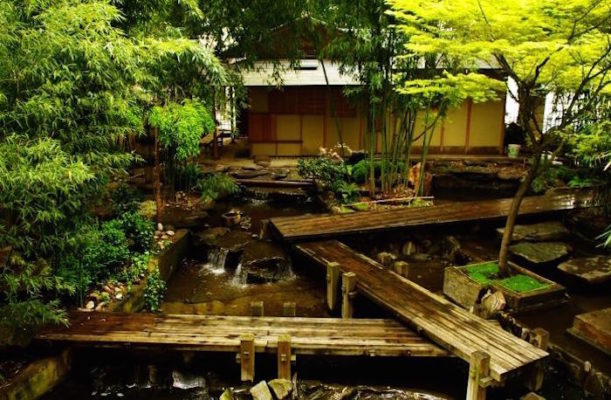 The enchanting garden of the Buddhist pantheon

If you are a lover of French song, then you may know that Mr Gainsbourg lived in this house from 1969 until his death.
While the interior is inaccessible to the public, all the interest of a halt in this place lies in its facade. Indeed, the walls are regularly tagged so we can go there several times and not see the same pieces of art.
The house located at 5 bis rue de Verneuil (7th) remains a place of memory shrouded in mystery towards which converge still admirers and curious, in the heart of Saint-Germain-des-Prés. 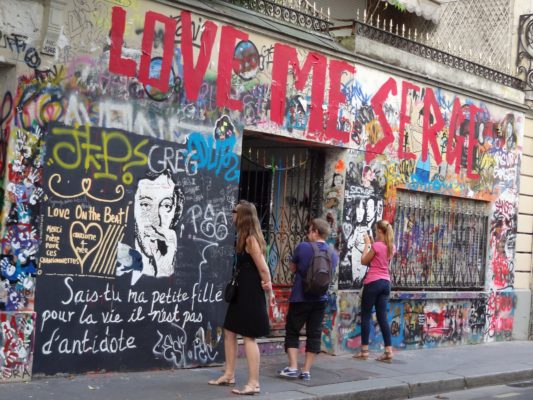 A symphony of colors with Crémieux street

Make a small stop on Crémieux street, you will not be disappointed with the trip.
Inside this one, you will discover an extraordinary universe, thanks to the facades rich in colors and artistic details. Each façade reveals its singular charm. The pastel tones very rarely seen in Paris, offer a magical and pleasant setting not to be missed. This paved street was designed following the model of the workers’ cities and has 35 pavilions all artistically unique.
An air of Cuba or Notting Hill thanks to its painted walls, its rainbow facades and trompe l’oeil frescoes.
An eccentric street in the heart of traditional Paris. 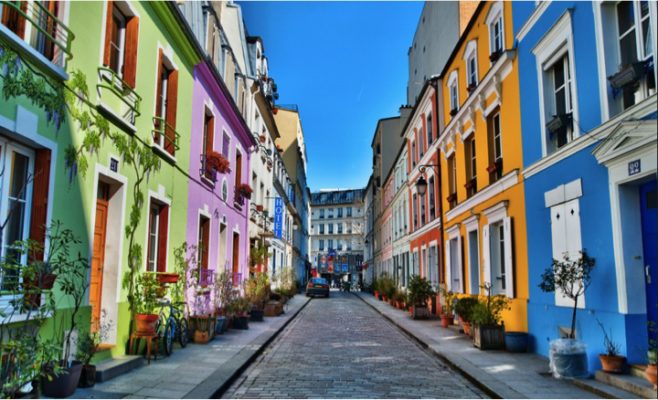 The incredible colors of Crémieux Street

The haunted mansion of Paris

“The Manoir de Paris” is the attraction not to be missed, especially around Halloween.
This mansion nestled between two buildings in Paris, is from frightening realism.
The first haunted show in France, “Le Manoir de Paris” revives, in the prestigious setting of a classified home, twenty legends from Paris.
Enter the darkness of an interactive journey. Become the victim of the dark history of the City of Light. Experience a unique theatrical experience and discover the terrible secrets of the capital resurrected by 35 professional actors. A unique show and a must for lovers of thrills. Chills and entertainment guaranteed!
The make-ups are magical, the sets are impressive. We meet killers with a knife, chainsaw, cannibals, crazy doctors, crazy psychopaths … In short, 1h perfect for lovers of horror movies, or thrills!
The price of 27 euros is a little high but worth it.
However, it takes between 1 and 2 hours to achieve it. The most patient will have the chance to live the adventure. Otherwise, be smarter than us, buy your tickets on the internet, you will pass by the fast track.
For more information, visit the Manoir de Paris website.

The oldest market in Paris

Wander among the rich alleys of the Marché des Enfants Rouges at 39 rue de Bretagne.
This is the oldest market in Paris open since 1628. There is fresh produce but, above all, it offers the opportunity to eat by tasting foods from around the world.
This historic market in Paris takes its name from the orphanage of Red Children (enfants rouges) created in the sixteenth century and closed shortly before the Revolution. The poor little boarders were then dressed in red, a sign of Christian charity.
It’s Saturday that the charm of the market works best. We will sit there to taste one of the international specialties that are cooked there.
The most difficult will be to choose between Moroccan, Italian, Lebanese, African caterers, or to opt for the Estaminet des Enfants Rouges, the pleasant little inn with fresh and good products.
After or before having filled your stomach, you can do the same with your basket because we find in this market primeurs, fishmonger, organic and regional products, flowers, oils and even photographs, in the intriguing shop of Fabien Breuvart. 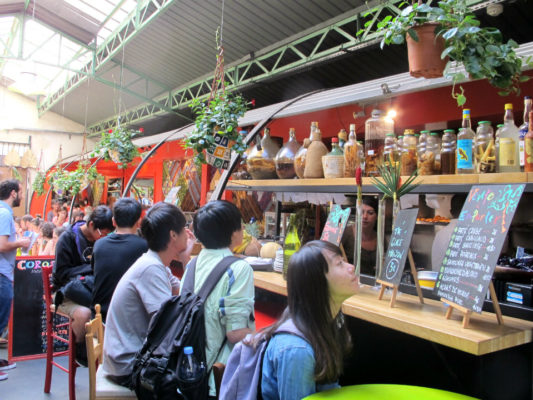 Tourists come to eat at the “marché des enfants rouges

A pagoda in the middle of Paris

A pagoda? It is not that surprising when there are so many mosques, temples, and other buildings in Paris for all religious denominations …
Yes, but the original character of House Loo is that it is by no means a religious building, but simply the result of a man’s love for his country of origin – China – and his will to share it with his adopted country – France.
And although it was sold in 2011, it continues its activity according to the wishes of its illustrious founder, to be a cultural link between France and China.
It is now a private museum, which offers throughout the year exhibitions and lounges (and even privatized spaces). The only occasions if you wish to discover the magnificent Chinese interior decoration of this pagoda.
An unusual establishment to see at 48 rue de Courcelles. 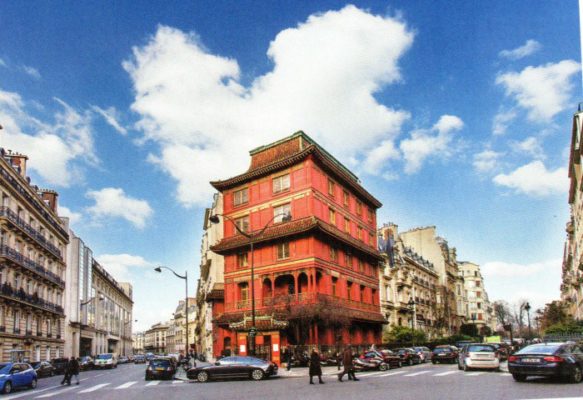 The lost pagoda in Paris

A shop – museum with a unique atmosphere

If you pass in the district of Saint-Germain-des-Prés, take a quick tour at the house Deyrolle. This bicentennial boutique / museum specialized in taxidermy and entomology (that is to say the study and classification of articulated animals and more particularly of insects) will plunge you in an atmosphere of cabinet of curiosities with collections rich in insects, shells, stuffed animals and other natural curiosities.
Whether you are a collector, a Natural Science lover or simply a curious visitor, this place is for you to put your eyes on it.
At the rendezvous, animals in life size, microscopic insects and the big surprise: the white owl of Harry Potter.
Small treasures that even the biggest stars cannot wait to see.
The Deyrolle house is to be found at 46 rue du Bac – 75007 Paris

A building with a surprising architecture

Have you just taken a tour by the Eiffel Tower or the Champs-de-Mars?
You may not know it but you are close to an architectural strangeness not to be missed: the Lavirotte Building, an unusual and fanciful building, facing the Eiffel Tower, has a unique, eccentric and unexpected style .
His ornaments, unpublished and disproportionate, tell a multitude of stories from all periods. 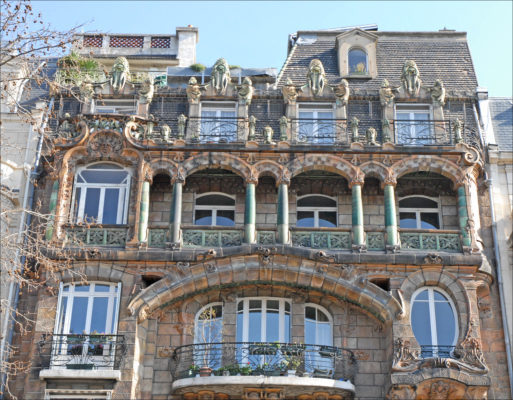 The towers of Notre Dame

It was during the restoration of 1847-1864 of the Cathedral of Notre Dame that Viollet-le-Duc imagines the 56 chimeras that adorn today the gallery of towers.
The belfry houses the biggest bell of Notre-Dame, the “Bourdon Emmanuel”, 13 tons, which can be visited before the access to the panoramic terrace, which offers a 360 ° view of Paris.
A Gothic masterpiece inscribed on the Unesco World Heritage list, made legendary by Victor Hugo’s novel published in 1831.
Attention, you must book the same day or by downloading on your smartphone the application “JeFile” or by going to the 2 terminals located next to the entrance of the towers, rue Cloister Notre Dame.
For timetables and prices, visit the Notre Dame website. 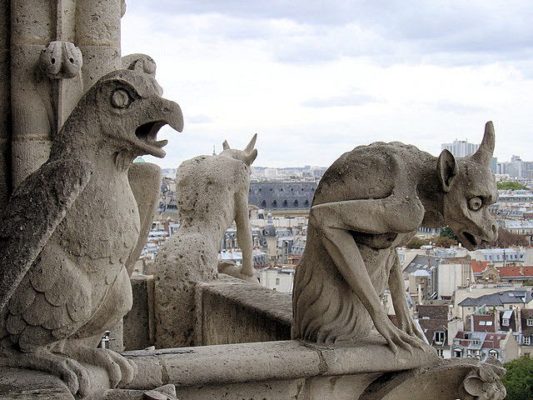 Some of the chimeras of Notre Dame

The moving memorial of the Holocaust

The Holocaust Memorial originated during the war, with the creation of an underground archive to gather evidence of the persecution of Jews.
The Contemporary Jewish Documentation Center later doubles as the Unknown Jewish Martyr Memorial.
Completed at the end of 2004, this extension has made it possible to offer more space for researchers in reading rooms, to deploy the permanent exhibition on the history of the Holocaust, to create a multimedia space, an auditorium and to erect a library. ‘exterior of the building’ the Wall of Names’ where have been engraved the names of all the Jews deported from France.
Today, the Holocaust Memorial is both a museum offering a permanent exhibition, two temporary exhibitions each year and many cultural events (meetings, screenings, testimonies), an archive center open to research and a place of memory and transmission.
To visit at 17 Rue Geoffroy l’Asnier, 75004 Paris 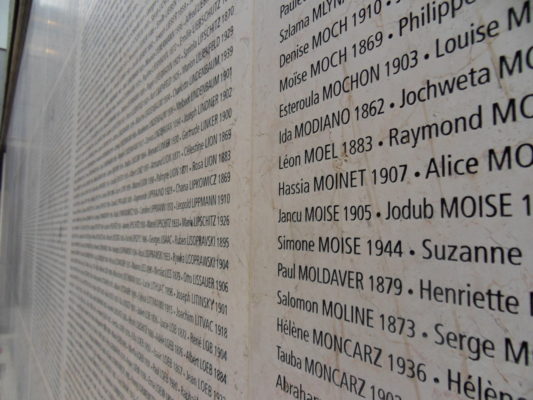 The Wall of Name at the Holocaust Memorial

Discover Paris in a new light

You now know how to occupy your next stay in Paris with new and fascinating activities purely French, between historical heritage, fantasy show and unusual discovery of our beautiful capital.