Warning: fopen(/home/ofrench/tmp/style.instances-NmsMoT.tmp): failed to open stream: No space left on device in /home/ofrench/web/ofrench.com/public_html/wp-admin/includes/class-wp-filesystem-ftpext.php on line 185

The Marquis De Sade, An Emblematic And Controversial Figure

French writer, philosopher rebel and atheist, Donatien Alphonse Franćois, Marquis de Sade, was born on 1740 in a well-established aristocratic family. He enters military school when he is 14 years old and returns to Paris in 1763 with the rank of Captain. He develops a taste for luxury, as is evident by his frequenting actrices and courtesans. That same year, shortly after his marriage, this road would lead to his first incarceration for “exaggerated debauchery”.

In 1772, after his second incarceration, he is accused of wilfully poisoning a prostitute, to whom he had force-fed aphrodisiac tablets. He is found guilty and sentenced to death. He eventually escapes prison until he is finally stopped and thrown back into a succession of prisons: Vincennes, La Bastille and Charenton. It is during this long prison term that Donatien Alphonse François de Sade starts to write to fight his boredom. He is eventually freed from prison in 1790 because of the Revolution.

During the revolution, both of his sons leave the country and his wife obtains a divorce due to his tendency for domestic violence. His lands in the south of France were pillage, so the Marquis finds himself penniless. He attempts to put on his plays to make a living. He is sentenced to death once more in 1793, but escapes the guillotine again because of an administrative error. At this point, he is getting by with his publications. He is arrested in 1801 because of his outrageous literary works that often featured pornographic passages and committed to an insane asylum in Charenton by order of the council. Although he was perfectly lucid and continued to protest the decision, he would remain at this institution until his death in 1814. 30 years of his life will have been spent in prison.

A master of the French language, the Marquis of Sade’s writings often go back and forth between sometimes extreme pornographic passages and philosophical musings. In “Dialogue between a priest and a dying man” (1782) he spouts his belief in absolute atheism, a cause that will feature in his writings from then on. It is only in the middle of twentieth century that his writings, which had been made illegal and demonized, were re-discovered and restored. In ancient times, the writings would have been studied from the superficial point of view that pornography was evil. Nowadays, they can be look for their other feature, the rebel musings that attacked the period’s hypocrisies and prevalent thoughts. The Marquis of Sade argued that his faults were natural and attempted to highlight the contradictions of his modern day life. His imagination, which was often perceived as outlandish, led him to desire to be free from all of the period’s constraints. He is considered as one of the great French writers and philosophers, one of those that pushed their theory to the limit, in both theory and physical limits. Here are some of his highlights:

“However the hour to depart rings; for two hearts that are intertwined, what difference is there between this and the time of death? It seems, when departing from the one we love, that the heart breaks or rips; our organs are so intricately linked with our cherished loved one, with home we are departing, that they seem to wilt in this cruel moment; we want to run away but we come back to one another, we kiss, we cannot be separated; when we are forced to in the end, all our sense are blurred, our whole reason for life is seemingly abandoning us, what is left is inanimate, our existence is solely contained by the entity that is separating from us” 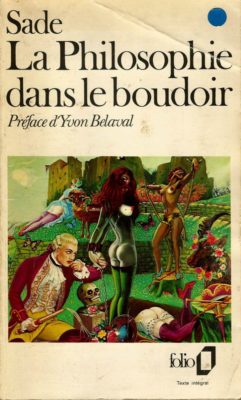 If there are indeed beings in this world with tastes that shock their so-called friends, not only should these friends not be surprised by this, not only should they not preach to them, or punish them; but rather serve them, entertain them, remove any barriers to their happiness and provide them, if you want to be fair, with all the means to satisfy themselves without risk; because there is not a more dependent person than these, who craze this unique state; and is not dependent on whether you are spiritual or dumb, beautiful or humpbacked.”

“Ha! Renounce your virtues Engénie! Is even a single of the sacrifices you make for these false gods worth a minute of the pleasure you get by contradicting them? Come now, virtue is but a smoke-screen, a cult which consists of perpetual sacrifice and countless revolts against well meaning ideas. Can this type of movement be considered natural? Does nature speak out against those who outrage it? […] Is it not better, wise and more logical to sacrifice our egotism rather than our passions? For me, I believe one outweighs the other; and not listening to the latter voice is more right than wrong, since it is the only real natural path, while the other is based on folly and prejudices. 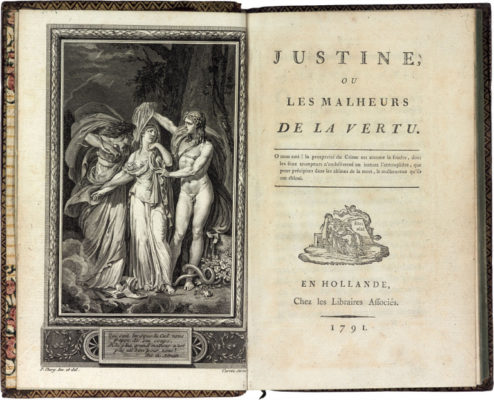 The Maquis de Sade’s outspoken philosophy, featured in his literature has inspired some of the most timeless classics of the twentieth century.

Art historians are still arguing amongst themselves to determine if Salvador Dali was a co author to Luis Buñuel for the L’âge D’or work.

This move based on Sade is used as a medium to denounce the social pressure of the start of the twentieth century. The surrealist description of the scenes only confirms the presence of the great Catalan master.

A year after Justine, Franco put his own spin on Sade’s work, but in a different way. In a modern setting this time, he makes arguments about eroticism vs aestheticism that inspires a new wave of thinkers.

In Salò ou les 120 journées de Sodome, Pasolini uses Sade’s work to cry out against Mussolini’s flailing second fascist regime at the end of the Second World War. He also never fails to mock the perverted effects of the bourgeoisie whenever he can.

The film, by Henri Xhonneux, features iconic talent like Roland Topor, who provide sign language for the dialogue. He looks back on the premise of the French Revolution and controlling one’s impulses through an interesting and new angle, that of a police drama. A mix of real life shots and animated segments, the actors who animatronic masks from the same creator and brand as Téléchat.

JR, The French Artist Who Woke Up The Street