The Great Pleasure Of Summer “Ice Cream In France”

Summer is back, the sun is shining, the heat is back and of course, who says sun says ice cream. Hmm the biggest pleasure in the summer, the pleasure of childhood that remains unchanged into adulthood! go ahead and follow me to know the best places to eat ice cream in France.

In the heart of the Marais neighborhood, « Une Glace à Paris » is a dream for lovers of unique pleasure. On the menu: a few must-haves like the three vanilla ice creams (from Mexico, Congo and smoked India), the three chocolate ice creams (from Tanzania, smoked or orange blossom essence) or even a cinnamon-pistachio ice cream, deliciously fragranced. 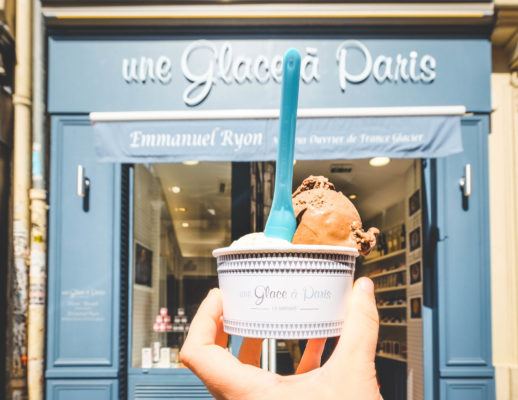 At Hugo & Victor, summer cools off by ordering an iced parfait on the terrace. To stick to the season, the flavors change every month: peach melba in July, herbaceous in August and chocolate in September. You can also choose from twelve different flavors of ice cream and sorbet, either in a jar or a cone (strawberry and thin peel of lemon confit, lemon cheese-cake, and cappuccino). You can also indulge yourself with a crumble or granola parfait, fresh fruit, whipped cream and a macaroon. 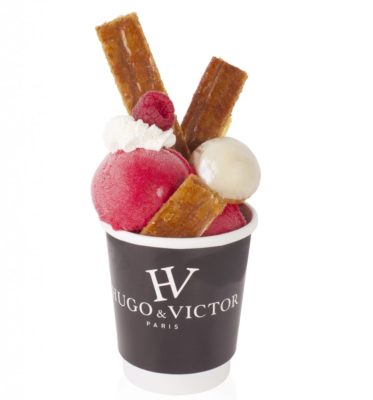 The Corsican ice-cream master has opened his first Parisian boutique. On the menu, about thirty sherbets and ice creams to enjoy on the spot, in the tea room, on the terrace or take out. Here, the beauty of the islands flavors are featured as Myrtle, Immortelle (small yellow flower) or Chestnut Flour. But you can also find more original tastes (beets, red peppers, mustard) without forgetting the novelties like Apricot or Mojito. Allowing a great combination of classics with unusual aromas ! 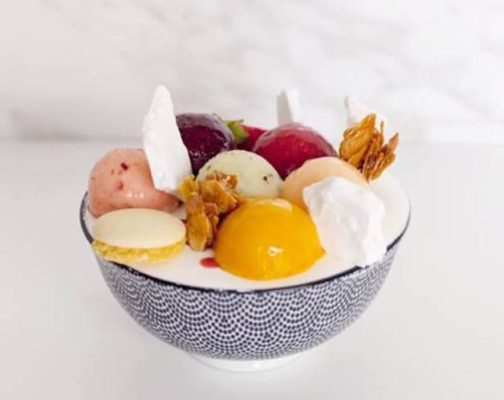 Great novelty from last summer, IceRoll continues to nibble on a cone. The technique ? Ice cream prepared by the minute! We add a milk base mix and cream to which is added one or more flavors, as banana, caramel, pear and red fruits, among others. Shaped with a spatula and a good hand toss and rolling everything together.

The result: four icy rolls with a cigarette russe (Pirouline) look, all in finesse and delicacy. 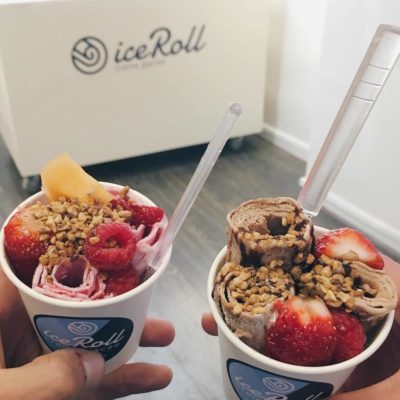 Eating ice cream with the scents of the south of France without leaving Paris is possible at Scaramouche. After having a first shop in the Alpes-de-Haute-Provence, this glacier, which makes its ice creams and sorbets in an artisanal way, has settled on another type of a mountain, more Parisian: Montmartre. The bonus? Organic eggs, raw milk and fruits of Provence, making delicious small artisanal nuggets from their ice creams. At the level of flavors, originality is required: it is possible to leave melting on its tongue, geranium ice cream and broken pistachio chips, olive oil and rosemary (for the most adventurous) with almond Calisson-milk, the Navette or even Lubéron truffle… 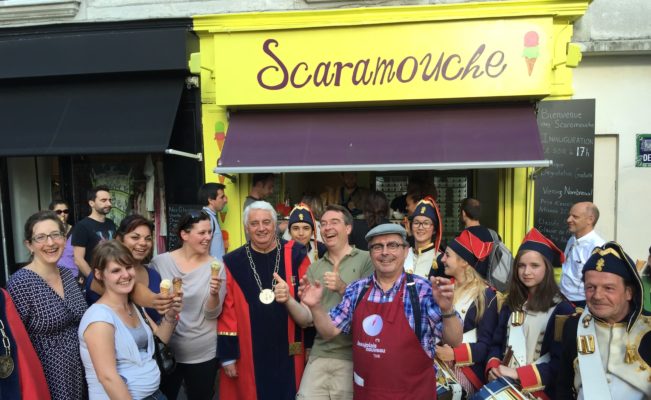 If its founder started with an ice-cream truck that he was riding around the four corners of Paris, there is now a fixed address in the 9th district. The principle? Ice creams composed by his care to the titles of films or songs. «Pump up the volume» combines for example the mango with Espelette chili, «Mr Green», celebrates the union of pistachio and black sesame, «Basilic instinct», mix of basil, lemon and vodka and «Black sugar sex magic» is composed of dark chocolate, wasabi and ginger. For those who stayed young, the place offers its Skimo, Eskimos originally and deliciously fragranced. 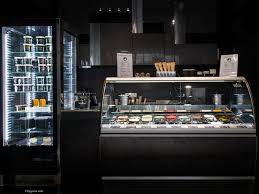 We come here for its very fruity sorbets full of flavors (strawberry Mara des bois, raspberry of Périgord, blood orange, grapefruit and pieces of confit ginger….) Those who prefer classic flavored ice cream will indulge in pistachio, praline hazelnut, salted butter caramel, raisin rum or coffee. You can also taste its famous ice-cream macaroons that will be devoured in just one bite. 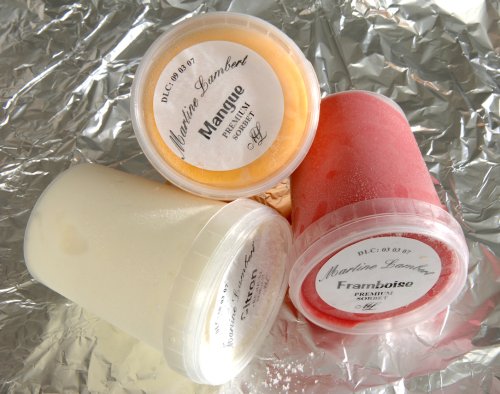 Raimo is an institution that treats the gourmet since 1947! If you are struggling to choose among the suggested glaciers, let yourself first be tempted by the historical scents that have made the reputation of Raimo, such as vanilla, iced chestnut, ginger, coffee, almond milk or lemon-basil. Settle down in the tea room and take the time to relish this delicate scent of sweetness, while adding, and why not, some homemade slivered toasted almonds. 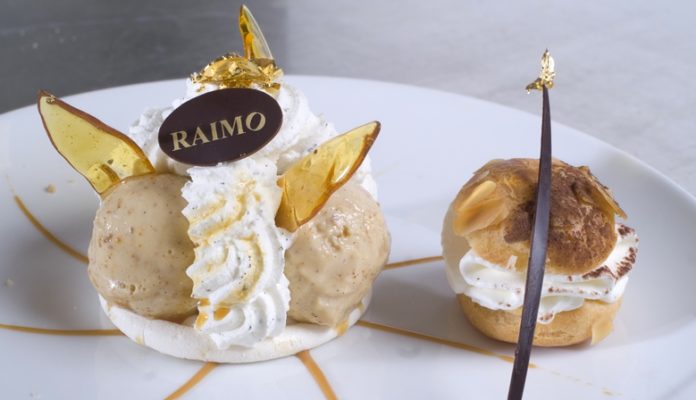 The family brand diversified and opened two stores on – Île-Saint-Louis and near the Royal Palace. There, you will discover seven different sorbets made from seasonal fruits such as mandarin kalamansi or the strawberry mara des bois. You can add all kinds of toppings (coulis, toasted dried fruit and whipped cream).
The establishment also took over its iconic famous dessert, the floating island that has been broken down into an icy softness which is a combination of caramel, milk flower and cream with a butter salted caramel coulis. 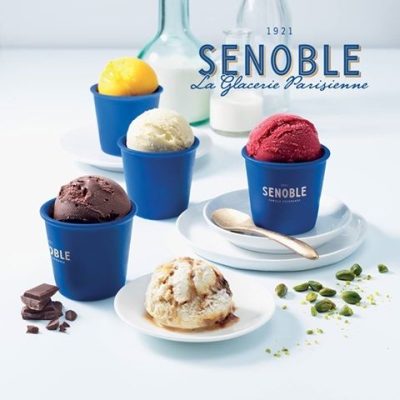 Glacier Philippe Faur, offers more original creations both one after the other: foie gras, truffle, mustard, chives or even olive oil! For those who prefer classic flavors, Philippe Faur also offers a very wide range of sweet flavors. 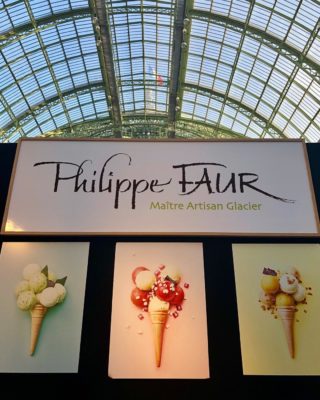 Located at the foot of the cathedral of La Treille in the Vieux-Lille neighborhood, « La Pause Givrée » offers amazing flavors of ice cream, from the strawberry gariguette to the organic orange of Sicily. A feast for the taste buds. 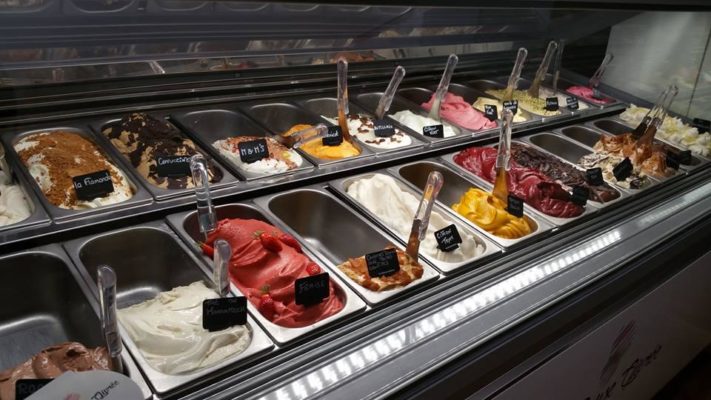 A small corner full of flavors, ideally located at the corner of the charming and shaded place of the Baleine, in Saint-Jean du Vieux Lyon’s neighborhood.
« Terre Adélice » 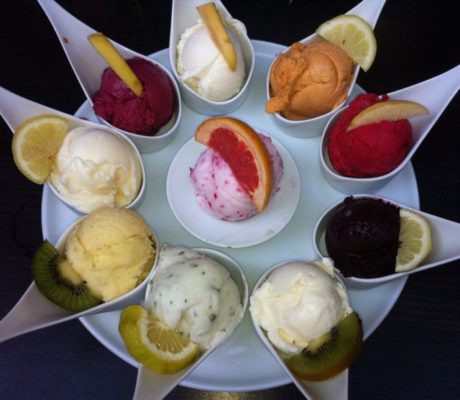 An incredible selection of ice creams and sorbets, to be enjoyed in one of the liveliest areas of the historic downtown of Montpellier. Bowls with fresh strawberry coulis, verbena, cherry, whipped cream and small clusters of redcurrant or create your own exquisite cone. You will always have the choice at « la Banquise » ! 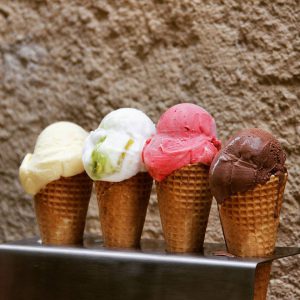 An inevitable place if you are passing through Marseille. Just a few steps from the Vieux-Port, you can take a seat on the terrace, located in the oldest time square of the city. Le Glacier du Roi offers homemade classics, but the navette ice cream with its most sweet orange blossom fragrance is an absolute must… 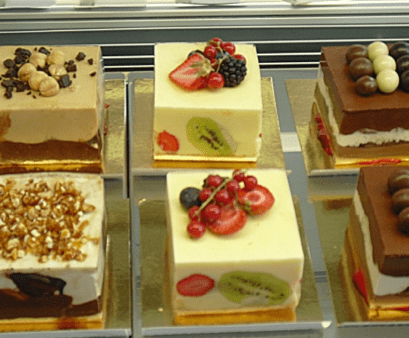 If you want to innovate and change from some of the traditional ice creams, head to NiceBerry and enjoy some frozen yogurts that you can enhance with many varieties such as: bits of fruits, coulis and even candies. The frozen yogurts are prepared with 0% fat free milk and the aromas are natural. 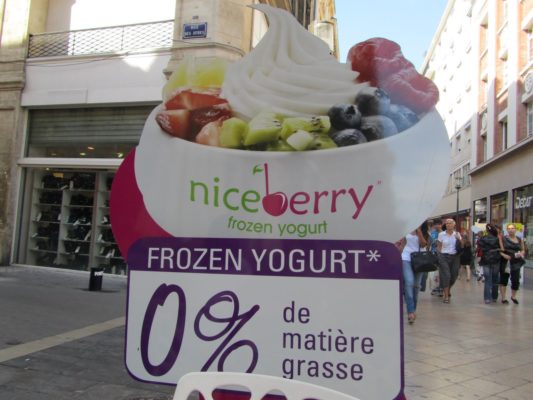 Now you know all the places where to enjoy a delicious ice cream, so if you have a great love story or are ice cream lovers, from the cone to the bowl, do not miss the opportunity to visit these places and enjoy these delicacies.