Catacombs! The word alone is enough to conjure fascinating or thrilling images. Catacombs inspire mystery, tombs and fantasy. But what do we really know about them? Almost nothing… Paris, the capital of France, is built on nearly 350 kilometers of underground galleries, like a huge city on stilts.

This gigantic labyrinthine of a network, poetically referred to as catacombs, extends under a large part of the left bank (from Odéon to Montsouris Park) and some areas of the right bank (Montmartre, Belleville and Ménilmontant). So get your flashlight and follow the guide: in the next pages, we offer a “historic” trip in to the catacombs! 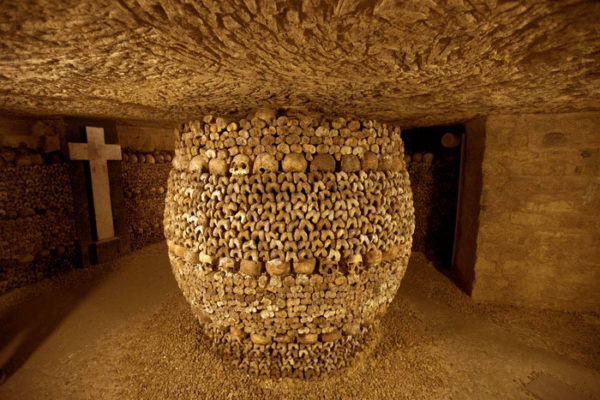 But where does this underground network of galleries come from? The answer is simple: stone. 45 million years before our era, the location of Paris and its surroundings was occupied by a tropical sea. Dozens of meters of sediment has built up on the seabed and have transformed into limestone, which is still visible today in the Catacombs. From the Gallo-Roman period on, Parisians used this to provide material for building their homes. These quarry limestone was notably used for the construction of Notre-Dame de Paris, the Louvre and the city’s ramparts. The catacombs of Paris are therefore a part of the old quarries, that extend under a large part of the city. The catacombs are 20 meters deep and have the length of a 5 story building.

The name of catacombs isn’t really accurate. It is actually more of an tomb. Indeed, here lies the bones of 6 million people. They were stored here when the cemeteries were closed for health reasons. The first cemetery to close was the cemetery of the Innocents in the current district of Les Halles in 1785. A panel with the words “Stop, this is the empire of death”: was placed at the entrance of the this famous tomb, the first of a long series of sentences, poems and other secular or religious texts, which only add to the meditative dimension that is the catacombs. 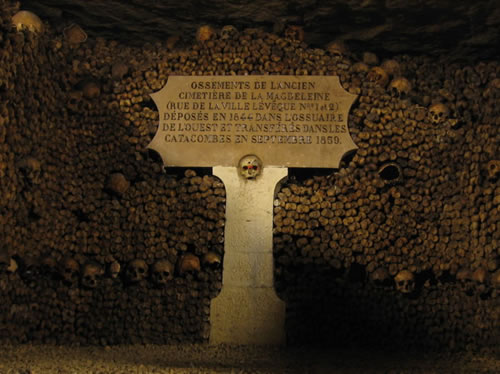 From their very creation, the Catacombs of Paris aroused curiosity. A note from Antoine Dupont, the quarries’ general inspector at he time, informs us that the first feast in the quarries was held on May 9, 1777. It was the first of a long series. In 1787, Charles X, King of France at the time, goes down into the catacombs with the ladies of his Court. In 1860, Napoleon III, the second emperor of France, takes the trip with his son! Today, everyone can visit the so-called official Catacombs, located in Denfert-Rochereau. The official path is only a tiny part of the 350 km of galleries that surround the capital below, which is exactly where the adventure begins. The catacombs have had their share of mysteries, a window into their very own little world. For example, in the seventeenth century, a man named Caesar offered to meet the devil face to face in this underground network “for 45 or 50 pistoles” (pistols were the unit of currency at the time). Once underground, he uttered mystical incantations, while accomplices held barking dogs and lit fires. All of this, directly under what is now the Sainte-Anne Hospital. Clearly unhinged, Caesar would spend the rest of his days in a dungeon in the Bastille. 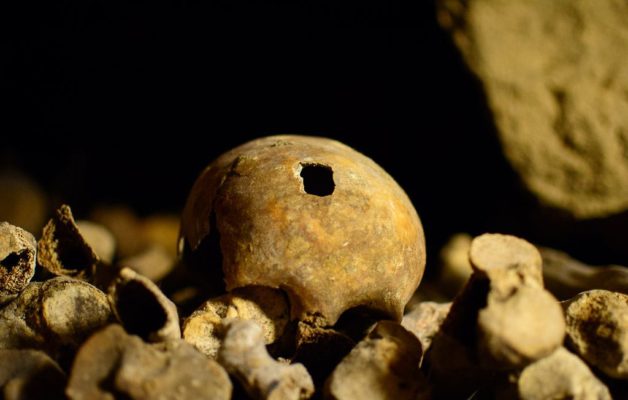 On the eve of the Second World War, Paris’ basement experienced the creation of a significant number of bunkers. There are many examples of this, be it a German (under the Lycée Montaigne), the resistance, referred to as Rol-Tanguy (under the Denfert-Rochereau square) and even one for collaborators, referred to as Laval (under the school Feuillantines). According to Gilles Thomas, the author of the book The Catacombs, History of Underground Paris, “While it is possible today to easily switch from one to the other via a gallery, it was not the case during the war because they were not all active at the same time. During the events of May 1968, students used them to avoid the police. Descending into the catacombs as an escape plan has become a common practice, although it is as dangerous as it is forbidden.

From the 90s on, the police cement over all the entrances to the galleries in order to avoid problems. Illegal explorers, which numbered in the thousands in the late 1970s, dwindled to around 300 in the early 1990s. Those few remaining are the most passionate. They have to avoid law enforcements, accidents and bad encounters, not to mention leptospirosis (rat disease). The most interesting part of the catacombs lies under the 14th and a part of the 13th district. Unfortunately though, the “unofficial” catacombs are not accessible to everyone. Just remember that it implies traveling hundreds of meters with a hunched back and a flashlight held aloft. Sometimes you’ll have to crawl, so you can sneak through entrances where you can barely pass. You might also cross paths with flooded galleries where the water rises very quickly. It can quickly become a living hell. When you are about 20 meters underground, even lower than the metro and the sewers, it’s about 12 degrees and the silence reigns supreme. It’s line entering into another world.

Some galleries have history that goes back more than two centuries, like the tomb of Philibert Aspairt, the gatekeeper of the Val-de-Grace, who is said to have lost his way in the underground network in 1793. In terms of remarkable discoveries, room Z and its vaults are not to be missed. They were renovated, consolidated and inspired by Romanesque art. Room Z is one of the preferred locations for illegal exploring parties, even though attendance has dropped considerably in modern times. AIt is commonly enough referred to as “the beach”. This room was built twenty years ago and features a floor made of sand. Finally, no trip to the catacombs is complete without going through “the castle”. This large room, decorated with gargoyles, has a round table surrounded by benches. A miniature hand-carved miniature castle and a wrought iron candlestick feature prominently, set on the middle of the table. 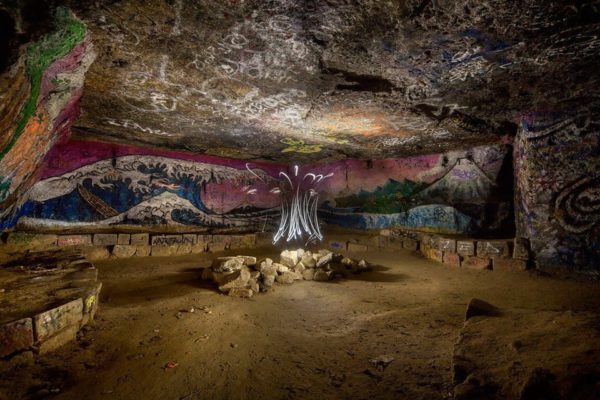 Finally, remember that the catacombs are not visited as one would DisneyLand. You will required to at least know how to get back in order to get out alive!

The 10 Most Famous Outlaws, Scam Artists and French Gangsters of all Time

A Sneak Peak At France’s Most Beautiful Beaches