When taking the Parisian subway, there are stations where you have no choice but to stop to admire the walls’ or ceiling unique art. Among the must-visit spots is the Arts Métiers station, with its copper cladding, and the Cité station, featuring its very special, all-natural light show.

Located on a half of a metro line, number 11, it is rarely taken by Parisians. It was renovated in October 1994 for a special occasion, the bicentenary anniversary of the National Conservatory of Arts and Crafts, which is situated just above. It was famed Belgian cartoonist François Schuiten, author of the comic book “The Fever of Urbicande”, who thought up and brought the project to life, thanks to an exemplary partnership between the Autonomous Régie des Paris transport and the Museum of Arts and Crafts. Completely covered with copper, the station also has a series of portholes that give the impression of being in a submarine. 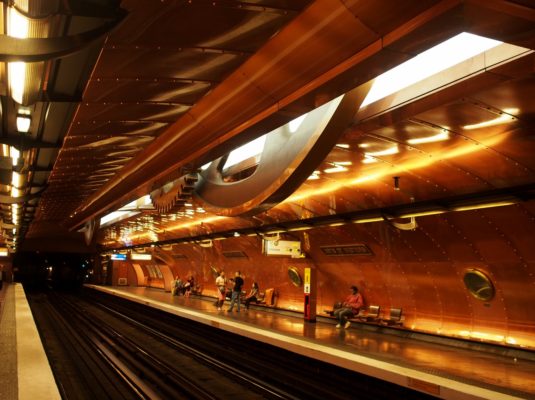 The Cité station, as its name suggests, is located on Île de la Cité. It is also the only Paris metro station that is situated on an island. It beautifully shows off the technique and know-how that was required to build the massive monuments of the early twentieth century, with its unique, huge metal plates and gigantic rivets.

The cité station is therefore lodged a 20 meter deep well and has become a staple of the line 4. This station is mainly used by tourists who are drawn to the island’s beautiful monuments. Most actual Parisians will rather get off a few stops later, either at Châtelet or Saint-Michel, both of which are also very large gates. The fact that actual Parisians rarely use it is in part the reason why the station was only inaugurated a few months after the line 4’s official inauguration: the subways simply never stopped.

Currently, this station is illuminated with green light, from the pretty street lights that decorate it. 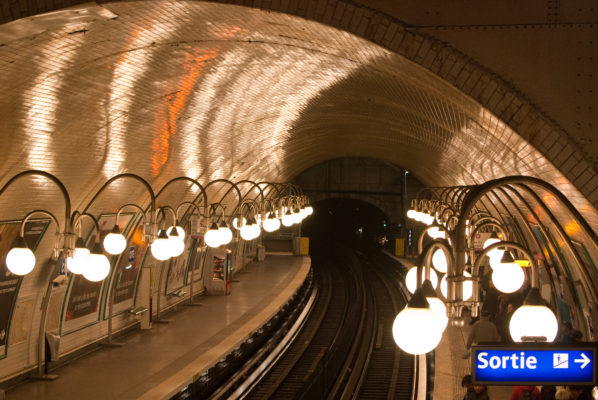 The Gare de Lyon is one of the most modern stations in Paris. It is especially renowned as one of the greenest, it’s a bit of a split bargain. On its first quay, line 1, visitors can take in superb 1900s architecture (the year the station opened) with yellow poles and a deliciously retro metal finishings. They come to line 14 to view the artificially lit exotic garde. Most flowers and trees are real, although some are fake. 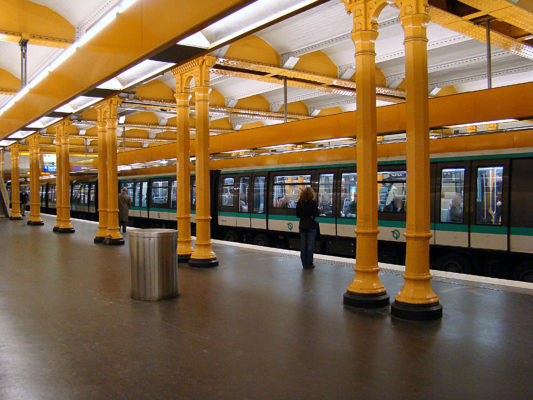 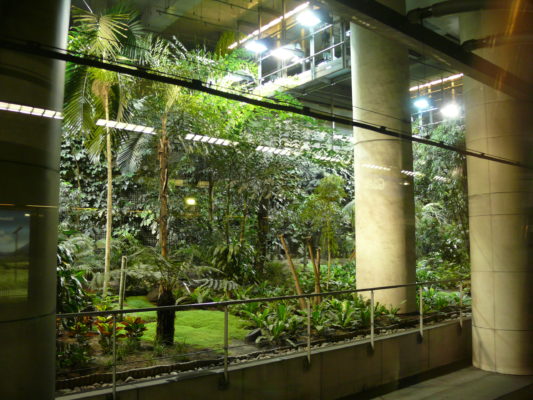 There is nothing better than a little reading to pass the time while waiting for the subway. The Concorde, located on line 12, is perfect for that, thanks to a 1991 installation by Françoise Schein. The walls of the station are entirely covered with blue letters painted on white ceramic squares. But what do they all mean? When combined, they form the text of the Declaration of Human Rights. All spaces have been removed, and any punctuation marks are all noted at the bottom. 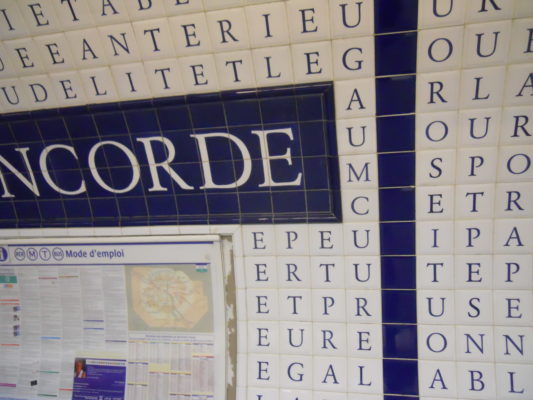 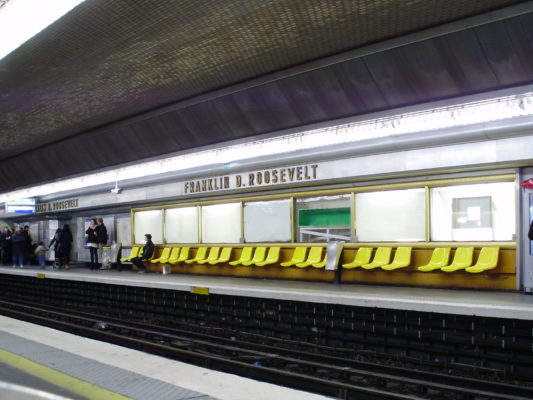 When one speaks of the Louvre, that implies a love of museums, and this station is an actual, although small. museum all to itself!

Soft lighting help to feature the many statue reproductions that adorn the hall, both from Antiquity and the Middle Ages. This place is dedicated to art and children. It does so by displaying reproductions of ancient statues, walls covered in porcelain stoneware with sleek black seats adding the finishing touches on a cozy atmosphere. The original idea was to help little ones to take on the cultural world without fear. The museum prides itself on its focus on family and keeps fighting for a more open culture, open to all.

On this stop, you have to look up to fully enjoy the originality. In 1988, the painter Jean Bazaine decorated it with mosaic signatures of famous students from the Sorbonne, to be able to review his classics during his commute. He created theWings and Flames hall, adorned with two beautiful birds that are actually composed of 60.000 tiles of enamelled Volvic lava, one predominantly red, the other predominantly blue. These are meant to be symbols of the spirit. If one take the time to look around, they might recognize the signatures of Racine, Hugo, Pasteur and Rimbaud. They are all featured in this tribute to the district where the study of letters and science has reigned since the Middle Ages. 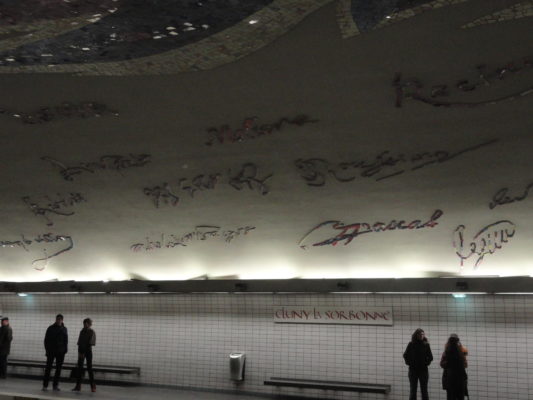 Pont Neuf is a stop on line 7 of the Paris Metro, located in the 1st arrondissement of Paris. it was opened on April 16, 1926, on the right bank of the Seine at the Pont Neuf. The station is centred around its collection of reproductions of various large size coins, evoking La Monnaie de Paris, whose headquarters, the Hotel de la Monnaie, is located opposite on the left bank of the river. These displays begin on one side of the wharf and lead all the way to the other side, through the vault. The platforms also include an antique monetary scale and two showcases with real coins. 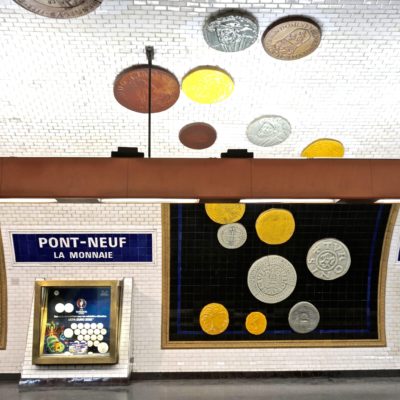 The 2nd most frequented station in Paris, it has many assets: a splendid rotunda under the Place du Havre, a magnificent exchange hall and its giant bubble that acts as a gateway. You can’t forget the Milky Voice mosaic, painted by the Quebec artist Geneviève Cadieux, that has been displayed in the hall that connects line 14 to line 9 since 2011. 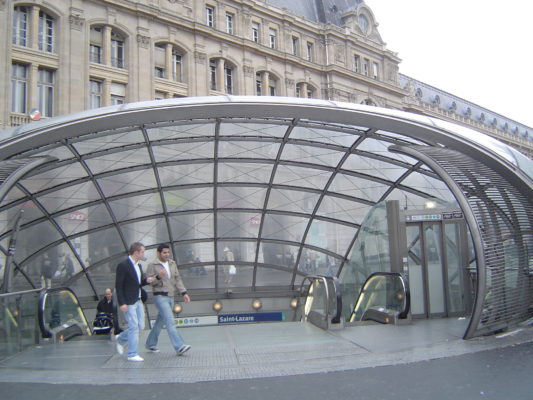 Bastille is a stop on lines 1, 5 and 8 of the Paris metro, located at the limit of the 4th, 11th and 12th districts of Paris. In 2012, it was the tenth busiest station of the network, with 13.1 million direct users. The line 5 stop features the ruins of one of the founding walls of the old Bastille prison on one of these quays, which was discovered during the construction of the line in 1905. Yellow lines drawn on the ground mark the contours of the building. This stop also exhibits various media featuring the ancient fortress.

The line 1 station features mosaic sculptures dedicated to the French Revolutionary period. It is a collection of frescoes by Odile Jacquot and Liliane Belembert that tells the story of the great events of the French Revolution in a series of five paintings. In addition, the station is up high, overlooking the underground entrance of the Saint-Martin Canal.

The 10 Most Beautiful Natural Lakes In France

The Great Pleasure Of Summer "Ice Cream In France"