A true representation of French refinement, Parisien palaces are fascinating. With a guaranteed level of quality and luxury, there is only a handful of establishment that can obtain this coveted title. It’s a recognition that only makes a few people happy in a very elite circle. Offering services that are unique in Paris in their constant search for excellence, Parisien palaces have been become to elite in the “art of hospitality”

The Plaza Athénée is an international renowned establishment located in the 25th arrondissement. This 5-star hotel is close by to the Chaps Elysées and the Eiffel tower even offers suites with views directly on these two emblematic Parisien monuments. Since it’s inauguration in 1911, the palace has accommodated the world elite, be they crowned royalty, international starts or businessmen and women from the world over.

Considered one of the most prestigious Parisien palaces, the establishment is renowned for the quality of the hospitality that it offers. The palace has 188 rooms, 43 suites and offers 5 different restaurants of different style and cuisine, the most famous of which is the “Alain Ducasse au Plaze Athénée” restaurant. The fashion house Dior also offers a venue in the heart of the Plaza, proposing one of the most beautiful spas in the capital: the Dior Institute. This space, dedicated to face and body care is fully functional, with a gym, steam room and sauna. 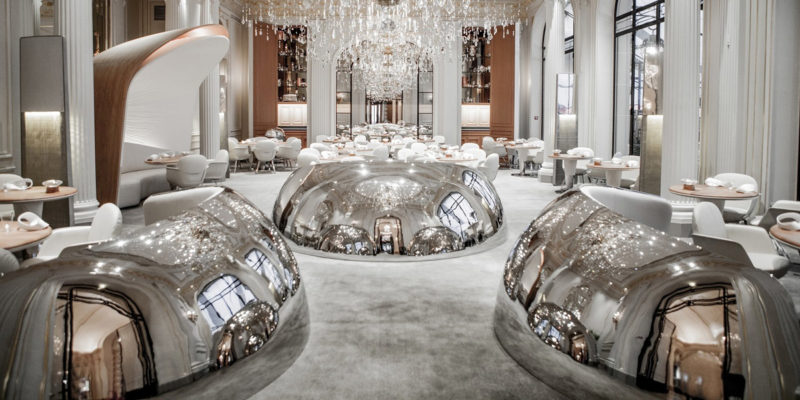 This hotel is without a doubt one of the most important luxury hotels in Paris. Sadly known throughout the world as the last establishment visited by Princess Diana, this 5-star palace is a must. The Ritz hotel is a palace located at 15 Place Vendôme in Paris, right between the Opera Garnier and the Louvre, in an early eighteenth-century building that used to be a mansion.

This legendary establishment, founded by César Ritz, opened its door on the 1st of June 1898.
With the help of his head chef August Escoffier, César Rits turned the palace into a symbol of luxury, excellence and haute cuisine.
A pioneer in the luxury hotel business, he will quickly earn himself a reputation as someone with good taste and elegance and has since been a staple of meetings where the world elite. His luxurious suites are named after the most famous occupants to ever stay there. 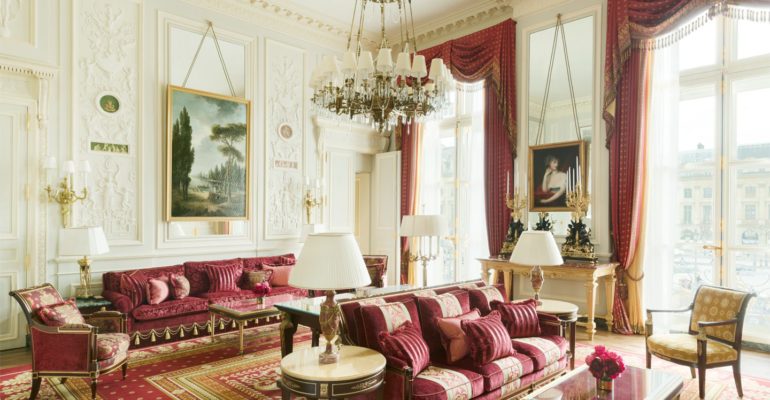 This splendid Parisian luxury hotel is located at 10 place de la Concorde and is one of the oldest establishments in the capital. Historically, the Crillon was the venue for famous beginner’s balls. Despite being one of the smallest of the Parisien palaces, it is listed as a historical building and is often a haven for celebrities. It is also one of the most majestic palaces.

Housed in a former 18th-century mansion, it is a historical monument in every sense of the word, simply because of its location, to start with. The only hotel on the Place de la Concorde, it offers visitors the possibility of feeling like all of Paris is under their feet. You can see the Eiffel Tower, the National Assembly building, the Tuileries Palace and the Seine river, amongst other things.
However, the Crillon hotel is not just a view worthy of a postcard. It’s a part of history. The palace used to be a private hotel which was owned for a long time by the Count of Crillon, whose construction was entrusted by Louis XV to the architect Jacques-Ange Gabriel in 1758. 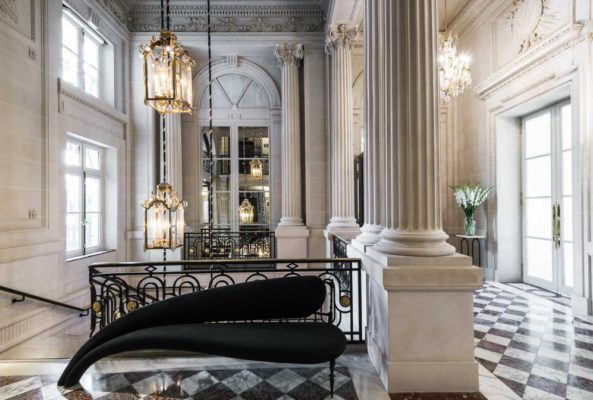 The Four Seasons George V Hotel was officially inaugurated in 1928. Located in the very heart of Paris in the 8th arrondissement, it is right near the Champs Elysées.

It has a very classic and simple style that dates back to the 1930s. This famous Parisien palace is a luxurious establishment whose Art Deco style is the perfect link between the ancient furniture and the latest generation of technology that is used. This 5-star hotel is among one of only 13 establishments to have obtained the right to call itself a Palace. 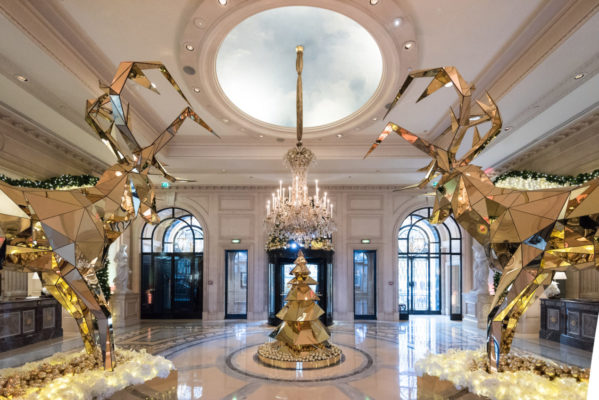 Open since April 1925, the Bristol has enjoyed a reputation of high standing for almost a century in Paris. It’s probably the best-known hotel in Paris.

A legendary establishment in the capital, the Bristol has spent years on constant renovation. It is the only hotel that the Germans did not take over during the war. The story says that the architect of the Bristol, a Jewish man, Léo Lehrman, hid out in room 106 of the hotel during the entire occupation in order to continue working at night with the help and complicity of over 200 employees at that time.

This beautiful Parisien palace is close by to the Tokyo Palace, one of the most visited museums of all of Paris. Originally, the Shangri-La Hotel was the home of Prince Roland Bonaparte. It’s a historically charged 5-star hotel that is recognized as one of the most majestic in Paris. The palace boasts 65 large rooms and 36 luxurious suites.

Designed by interior decorator Pierre-Yves Rochon, the rooms retain all of the charms of the former private Parisienne residence thanks to an elegant interior decor.

The selected materials and furniture are designed to procure a greater comfort and a harmonious atmosphere. 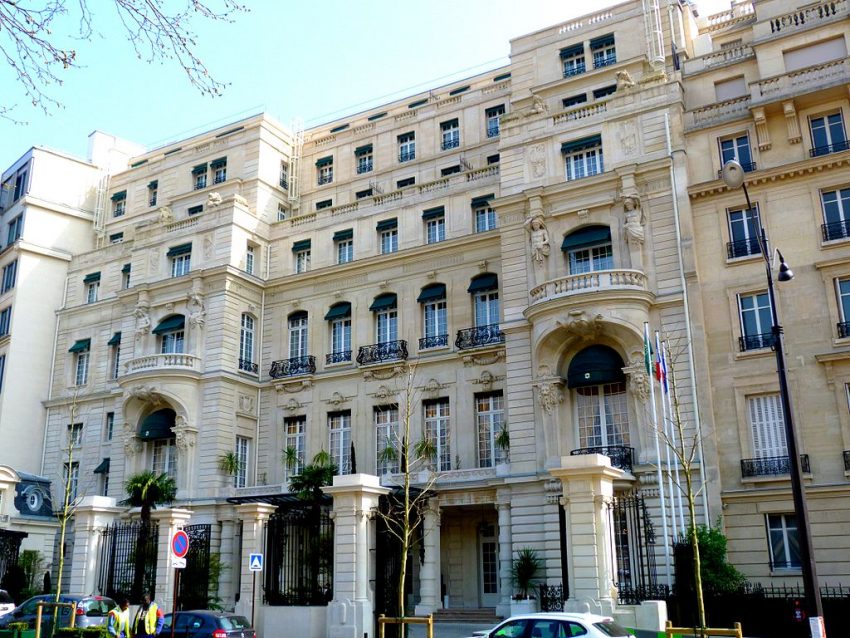 Ideally located on Paris’ right bank, between the sumptuous Opera Garnier and the famous Place Vendome, the Hotel Scribe Paris is a legendary hotel in the center of the capital. Built in 1860, it used to be the seat of the aristocratic Jockey Club, a creative outlet for many of the movies that would come out in 1985. The Hotel Scribe was host to many famous characters. Today, the decor designed by Jacques Grange is a testament to the spirit of luxury in modern day Paris. Prestige, style, and elegance make the Hotel Scribe the perfect destination for an exceptional stay. 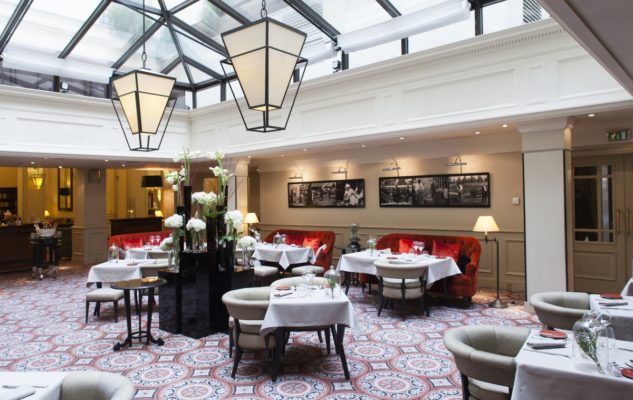 In the very heart of Paris, ideally located opposite the Tuileries gardens, the Meurice Hotel is steeped in history. It was used as an inn in the 18th century but it moved in the 19th century, at which point it became a hotel. All of the rooms inside are decorated in the style of Louis XVI.

The jewel of the Dorchester Collection, it’s imposing structure was placed on Rue de Rivoli and has been one of the foremost palaces since 1835. The Meurice hotels have, from its very creation, been inspired by the grandeur and the splendor of Versaille. It was designed for kings, queens, patrons, artists, enthusiasts, and adventurers. In some ways, it is the perfect expression of the French genius that is the art of living.

Located only a few steps away from the Champs-Elysées and the Arc de Triomphe and open for over 80 years, the Royal Monceau Hotel is among the great Parisien palaces that have thrived over decades thanks to incredible know-how and its extraordinarily high standards. Evolving over time to become a common meeting place for artists, celebrities, and intellectuals and came under the tutelage of Philippe Starck, who completely renovated it in 2010. The palace combines the atmosphere of a Parisien salon and a typical artist commune. Some of the hotel’s more famous guest include Vietnamese Activists Hô Chi Minh or Michel Polnareff, who spent 800 days straight in the hotel without setting foot outside in his quest to record his album “Kâmâ Sutrâ”. 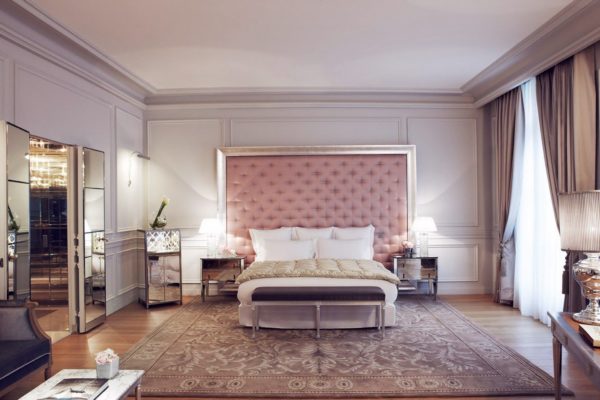 At the very center of the famous Place Vendôme, visitors can discover one of Paris’ most magnificent Palaces. Overlooking the famous Rue de la Paix and just a few minutes from the Opera Garnier, this 5-star hotel offers a unique view of the city. The Park Hyatt Paris-Vendome hotel is a blend of modern architecture with sleek lines and classic designs. The architecture was designed by American interior decorator Ed Tuttle. 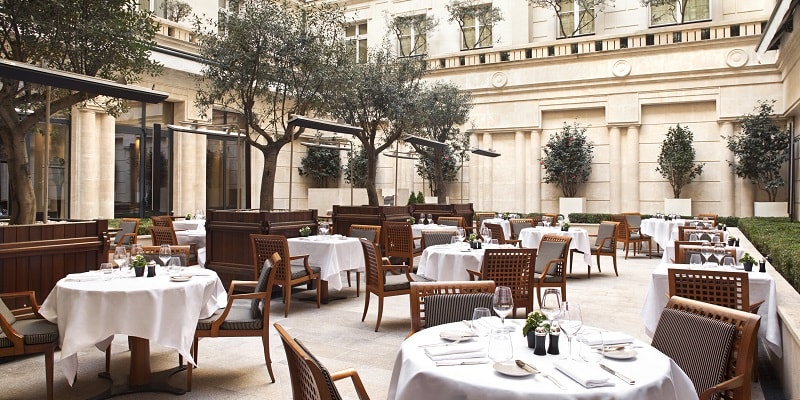