Considered by many as one of the greatest photojournalists in the world, Henri Cartier-Bresson was born in 1908 and died in 2004. Photographer and also a designer, Bresson used a Leica camera that became legendary, thanks to his extraordinary work in photography.

Sensitive to world events, Bresson tried to convey the fragility of human conditions through his poignant shots. His long career allowed him to immortalize the great events of his century: from the liberation of Paris, to Gandhi’s weariness a few hours before his assassination through the Chinese Communists movement. Undisputed master of street photography, his photos taken in the middle of the action were never cropped through sorting. In 1974, he co-founded the co-operative agency Magnum Photos with five other photographers. Thanks to this exceptional artist, the shooting in square format was democratized, as well as the black and white photos and the shades of gray.

Behind the Saint-Lazare train station, an image immortalized in 1932, remains one of his most memorable photographs, often referenced as a work of art. Bresson was trying to freeze a decisive moment with his camera, which gives his work a surrealist dimension, worthy of the television. He is without a doubt part of photography history. 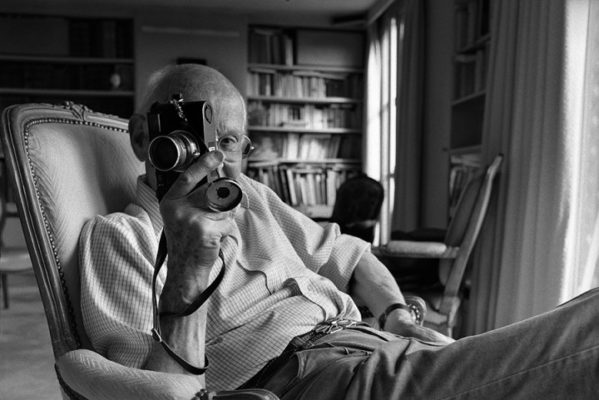 One of the main representatives of the French humanitarian photography, Robert Doisneau is also one of the most popular photographers after the war.He is particularly famous for his black and white shots in the everyday life of Paris people, especially children. Some of his photographs such as “Le Baiser de l’hôtel de ville” (The City Hall kiss) did the world tour. Born in 1912 at Gentilly in the Parisian suburbs, Robert Doisneau held a degree in lithography. It is however, thanks to his profession as a photographer that he made himself known!

It was not until the end of the Second World War the general public discovered Robert Doisneau’s photographs in prestigious magazines such as Life or Paris Match. Doisneau made black and white photographs of stealthy moments, especially in the street of Paris.

Artisans, lovers, children or jugglers…: Doisneau liked to capture the image of the unknowns and lambdas habitants, which according to him, represented the state of mind during the post-war era. He defined himself as a “patient passerby” waiting for the right moment to take his shot. 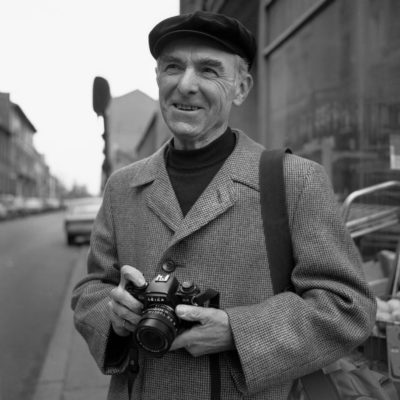 Nicknamed the night’s poet, this Hungarian photographer born in 1899 in Brasson, Transylvania, fell in love with France during his studies and decided to officially adopt the French nationality.

Self-taught the French language, thanks to famous writers such as Marcel Proust, the future photographer immersed himself in his art during his work as a journalist. Passionate about Parisian nights, Brassaï tried to immortalize the French’s daily life with a touch of humor and romance. Friend with some of the greatest artists at the time, he had the opportunity to photograph Salvador Dali, Pablo Picasso, Henri Matisse and many others. Brassaï impregnated the bohemian culture of the capital’s districts. The artist had a very particular way of calculating the pause time between his photos: he smoked a cigarette for a normal pause, and two or three for a long pause. 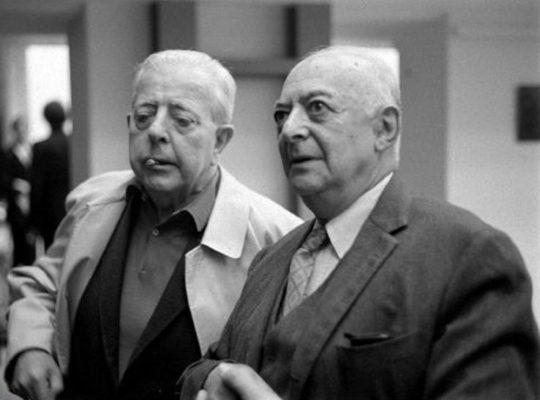 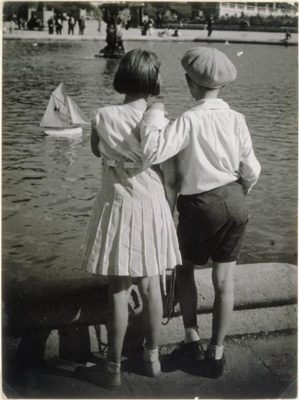 Talented photographer, media personality and environmental activist, born in 1946 in Paris, Yann Arthus-Bertrand is probably the most famous alive photographer from France. Passionate about animals, his photography career started in Kenya in 1976 while he studied for three years the behaviors of the lions’ family, photographing them daily, consequently becoming a hot air balloon pilot. That’s when he discovered the true potential of aerial photography. Throughout his return to France, he decided to make photography his full time profession by working as a big report photographer. Recognized for his aerial photography by famous photography magazines like National Geographic or Géo, he decided to create in 1991 Altitude, his own photography agency dedicated to aerial photography. In 1994, sponsored with UNESCO, he began his project: “La Terre Vue du Ciel” (The Earth seen from the sky), which remains to this his greatest success and the best-selling illustrated book in the world. Today, Yann Arthus-Bertrand dedicates himself to the presidency of Goodplanet Foundation whose objective is to promote the ecology’s benefits. 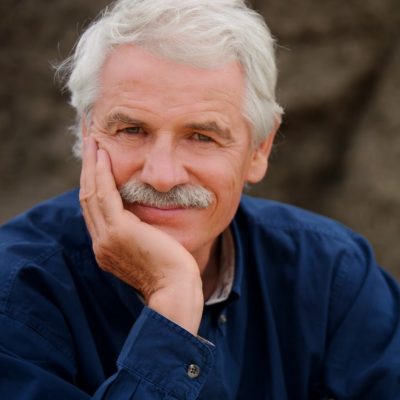 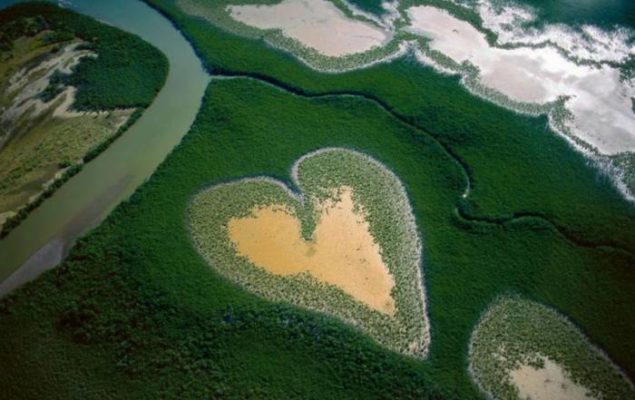 His name may be unknown to some; however, we owe to him the very first photograph. Born in 1765 in Burgundy, Joseph Niéphore Niépce, the inventor, photographer and physicist is considered as the French photographer for having the most impact on the development of this particular art and the forerunner of photography. At the beginning of the 19th century, he undertook many researches to discover how to fix the dark’s room images on a substance. Hard headed, Niépce first invented the heliographic process in 1824 before finally developing the concept of photography as we know it today. His heyday came in 1827, thanks to his photograph entitled “Point de vue du Gras” (Fat’s point of view), being the oldest preserved photograph in the world. Nevertheless, NIépce died prematurely due to his illness before finding success. 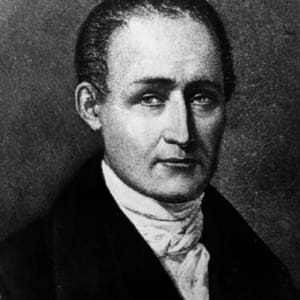 Marc Riboud was a photojournalist famous for his photographs all over the world, born in 1923, in Saint Genis Laval and died in Paris in 2016. He took his first photographs at the Paris Universal Exhibition in 1937 with the small Vest-Pocket offered by his dad for his 14th birthday. In 1944, he participated in the battle of Vectors. From 1945 to 1948, he studied engineering at Lyon Central school and worked at the factory, then decided to devote himself to photography.

Photographing France, as well as China, Algeria, England, and Vietnam, it’s in the United States, Marc Riboud takes his most famous photograph, entitled “La Fille à la fleur” (The Girl with the Flower).

It was mainly his work in northern Vietnam during the 1960s that made him a famous photographer. At the time, very few photographers were allowed to enter the territory; Riboud’s photos were not only aesthetic and poignant, but particularly rare. Shocking even at times, Riboud’s work demonstrated the ugliness, but also the beauty of life and humans. An inspiring artist for future photojournalists eager for international travels and experiences. 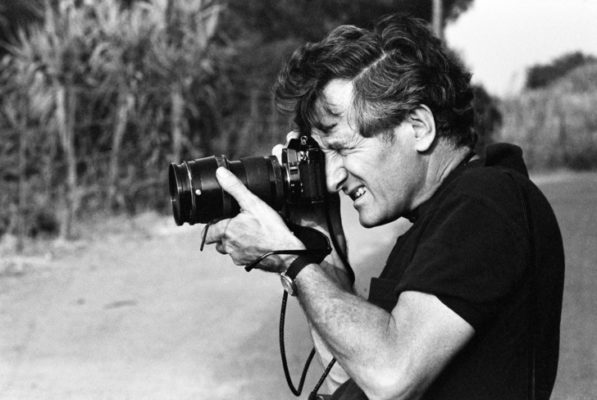 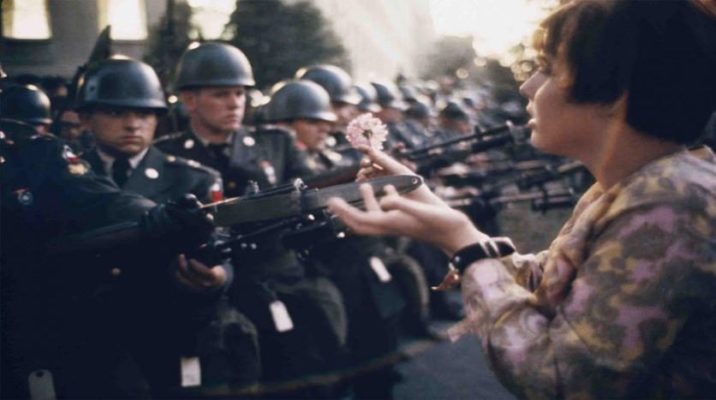 Famous Work: The Girl with the Flower

Better known in France under the name of Louis Daguerre (1787 – 1851), Louis Jacques Mandé Daguerre marked the history of photography by inventing a process called daguerreotype. This French artist, who was first a painter and stage designer, is now considered as one of the photography’s creators for having successfully developed and fixed the first images.

Colleague and friend of Nicéphore Niépce, he resumed his research after his death. That said, Daguerre is often perceived as the inventor of photography, although his colleague is the first instigator of the development of image fixation from substance.
In 1835, he discovered that mercury vapor could be used as an indicator of the image, which makes it possible to shorten the pause time (from several hours to a few dozen minutes only).

In 1837, he managed to fix the images with hot water saturated with sea salt; the daguerreotype was born.
Daguerre presented his invention to the French Academy of Science on January 9, 1839 and the patent was acquired by the French government on August 19, 1839. 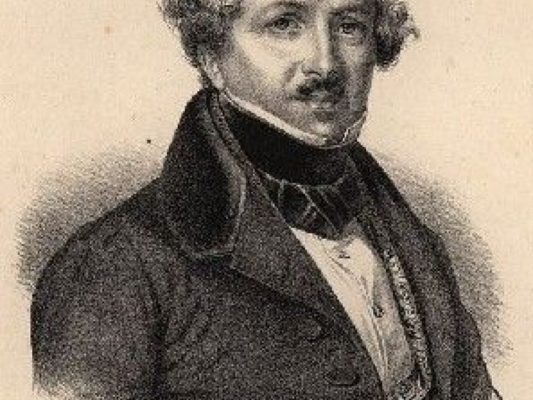 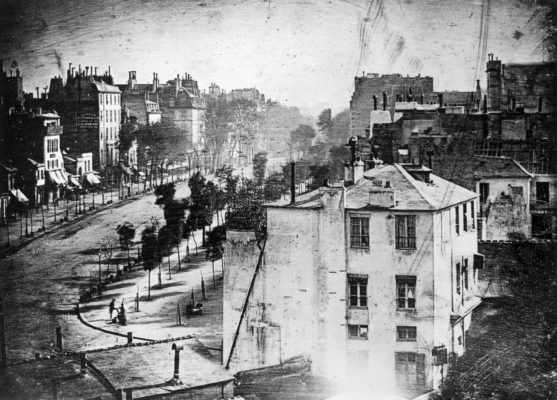 Guy Bourdin was born in 1928 and died in 1991 in Paris. Unanimously recognized as one of the greatest photographers of the half-century and as the most brilliant inventor of fashion and advertising images, Guy Bourdin remains a personality to the mysterious biography. The same way he’d always refuse retro perspectives, exhibitions, monographs or honoraries, he concealed his life behind his work, now dispersed in the collections that fueled some prestigious magazines and advertising catalogs.

Guy Bourdin’s work remains quite transgressive, since the photographer staged raw sex and violence. Framing, color saturation and ubiquitous red, the aesthetics of Boudin did not let down fans of insensitive photos! First, he collaborated with magazines such as Vogue France, Vogue Italy or Harper’s Bazaar, Guy Bourdin’s work then fell slightly into oblivion during the second half of his career. It was necessary to wait until his death so Bourdin’s work return to the front of the scene thanks to numerous retrospectives. 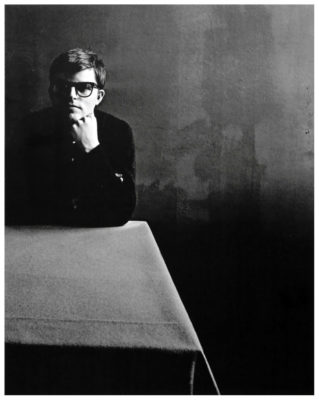 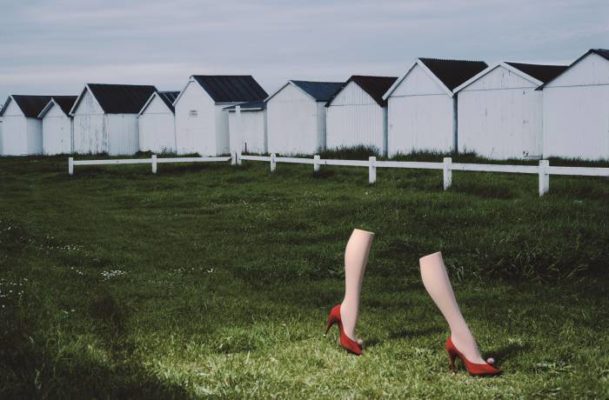 Willy Ronis is a major French photographer of the 1930s and post war years. Generally referred to as a “humanist photographer”, he joined the XV group, the famous French street cliché school alongside Robert Doisneau in the 1950s. Will Ronis was born on August 14, 1910 in Paris, where he passed away on September 11, 2009.

Starting in the 2000s, he won many awards. His fraternal chronicles of the working-class conditions are the subject of great retrospective exhibitions. Willy Ronis came from a family of Jewish immigrants. His father was a photographer retoucher in the foothills of Montmartre in Paris and his mother was a pianist. At age 7, Willy learned the violin, which he practiced until he was 25 years old. He wanted to become a composer, but in 1932, the cancer that caused his father’s death decided otherwise. The young man had to quickly earn for a living. In sympathy with the popular protests of the late 1930s, he devoted himself to street reporting and made several snapshots of the Popular Front, met Robert Capa and David Seymour, already famous at the time, and collaborated weekly with a Communist party “Regards’.

Becoming a photographer “from the outside”, in the 1950s, Willy Ronis multiplied the clichés of the people’s witnesses by restoring the halls’ atmosphere and Ménilmontant, from the flea market and the factories’ striking days, to intimate moments of childhood in popular neighborhoods. From the 1970s, Willy Ronis taught his art at various institutions, such as the School of Fine Arts in Avignon of the Aix-en-Provence’s faculties and Marseille. In 1979, he was awarded the national photography prize by the French state. 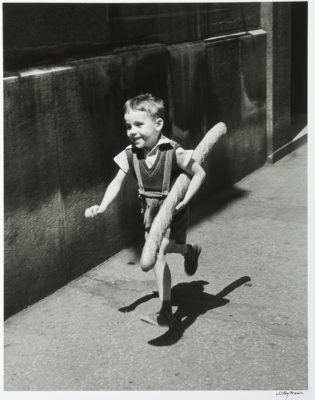 Born in 1942 in Villefranche on Saône, Raymond Depardon is a French photographer, journalist and filmmaker who took the official picture of President François Hollande.

Founder of the Gamma photography agency, Raymond Depardon works in the film industry and is recognized for several of his documentary films. One of his most famous documentaries is in 1974, “une partie de campagne” (part of the campaign), a documentary dedicated to Valéry Giscard d’Estaing’s presidential campaign.
On the photography side, Raymond Depardon covers important historical events, such as the Vietnam war or the Algerian war as a war photojournalist. 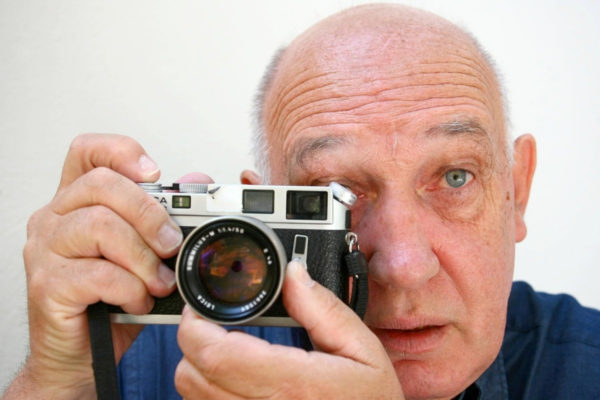