Last year, he celebrated his 130th birthday. The “Café de Flore”, emblematic place of the capital where met, still meet today and will always meet writers, artists, intellectuals, is a monument of life in Paris to see absolutely.

The history of the “Café de Flore”

The birth of an institution

This unpretentious café makes its appearance at 172 Boulevard Saint-Germain in 1885, a few years after the beginnings of the Third Republic.
It owes its name to a sculpture of Flora, goddess of flowers and source of Greco-Roman mythology, located on the other side of the boulevard.
Many authors quickly adopted their habits, such as Joris-Karl Huysmans, Remy de Gourmont and Charles Maurras (who is also the author of “Au sign de Flore” inspired by the scene).

Around 1913 Guillaume Apollinaire, neighbor of the establishment invests the place.
At first, he transformed the ground floor into a newsroom with his friend André Salmon. Later, the magazine “Les Soirées de Paris” is created there.
In 1917, on the terrace of the “Flora”, Guillaume Apollinaire invents the word “surrealist”, with the intellectual movement, literary and artistic Dadaist around a drink with André Breton and Louis Aragon.

In the 1930s, the “Café de Flore” is the favorite place of a whole family of writers (George Bataille, Robert Desnos, Leon-Paul Fargue, Raymond Queneau, André Derain … ) but not only !

A night view of the Café de Flore

The golden age of “Le Flore”

The world of cinema is not indifferent to the particular atmosphere that reigns in the bistro and also makes it a headquarters.
Thus, we can meet the director Marcel Carné, the actor Serge Reggiani, the young future actress Simone Signoret among others. The Café de Flore becomes the place where the theater groups meet after performances.

In 1939, Paul Boubal, bought ” Le Flore”. It attracts an intellectual elite who will sound the golden age of coffee. The mythical couple, Jean-Paul Sartre and Simone de Beauvoir, make it their “headquarters”
“We settled there: from nine o’clock in the morning to noon, we worked there, we went to lunch, at two o’clock we came back and we talked with friends that we met until eight o’clock. We received the people we had arranged to meet, it may seem strange, but we were at Flore at home, “says Jean-Paul Sartre. 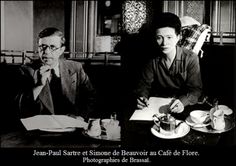 The evolution of the bistro to the rhythm of trends 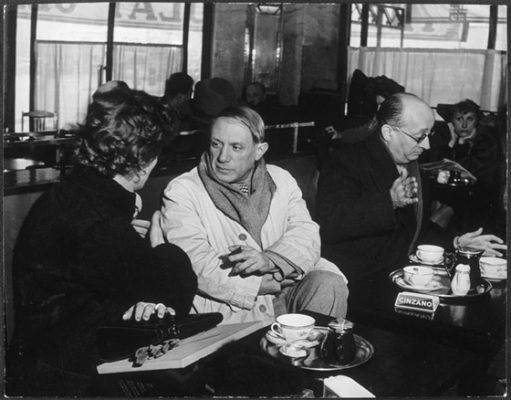 In 1984, Colette and Miroslav Siljegovic bought “Flore” and “La Closerie des Lilas”.
The more years pass and the atmosphere changes slowly.
The place will continue to attract artists and intellectuals, but they will come less and less to find a nice place, and more and more to show up.
Today, a tart tatin costs 15 €, a Caesar salad is bought for 20 € and the emblematic Flore chocolate lightens our wallet of 7 €.
We are far from the time we went there because we were poor and bohemian.

In spite of everything, the “Café de Flore” honors its share of history in the literature by hosting each year in November the jury of the Prix de Flore, created by Frédéric Beigbeder, which rewards a talented young author considered promising, since 1994.

His most famous appearances

As a Parisian institution you will understand that the “Café de Flore” has appeared at least as many times or more on the screens as the Moulin Rouge (but not as much as the Eiffel Tower anyway).
We can mention his appearance in 1963 in “Le Feu follet” by Louis Malle, in 1973 in “La Maman et la Putain” by Jean Eustache or more recently in 2012 in “L’amour dure trois ans” of Frederic Beigbeder.
But you list all the films, TV movies, series concerned would be simply impossible, so here is what you need to remember if you want to know a little more about this legendary Paris bistro.

In 2010, a movie comes out at the cinema bearing the name of the café. A beautiful tribute.
“Café de Flore” with Vanessa Paradis is a dramatic film about the crossed destinies of a French mother and a Montreal DJ.

In 2016, the TV movie “Les Amants du Flore” presents with realism and emotion the incredible love story between Jean-Paul Sartre and Simone de Beauvoir.
Embodied by Lorànt Deutsch and Anna Mouglalis on screen, we can see their passion as certainly as we immerse ourselves in what was to be the unique atmosphere of the “Café de Flore” at the time. 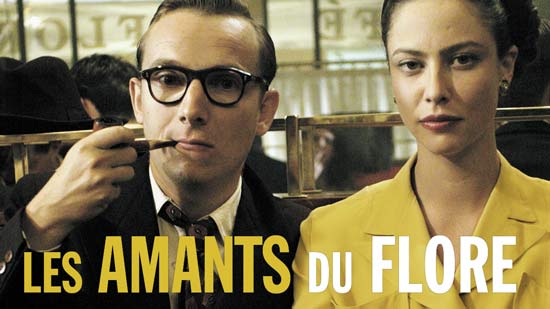 Here again, many books refer more or less obviously to “Le Flore” or pay tribute to him by his texts. (Charles Mauras, Paul Eluard, Eliette Abécassis …)
We have chosen to present you the most emblematic book, the one that will allow you to better understand what has made this Parisian bistro unique.
“Café de Flore” by Christophe Boubal.
This book makes us relive in a moving and often funny way, the great hours of the “Café de Flore”, from its creation until our days.
The author is the grandson of one of the former owners of the place, Paul Boubal.
This is his second book in memory at the “Café de Flore”.

Appearing on countless photography since its creation, the “Café de Flore” has been captured by the biggest names in the history of photography over the years.
We offer you below some of the most famous shots in which the place occupies such an important place, that all these pictures are named after him. 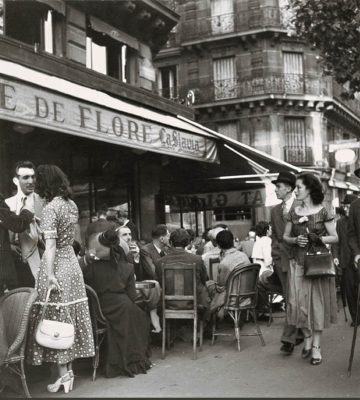 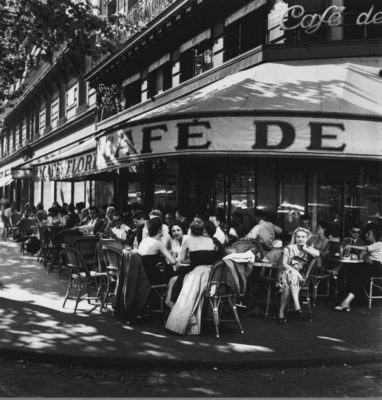 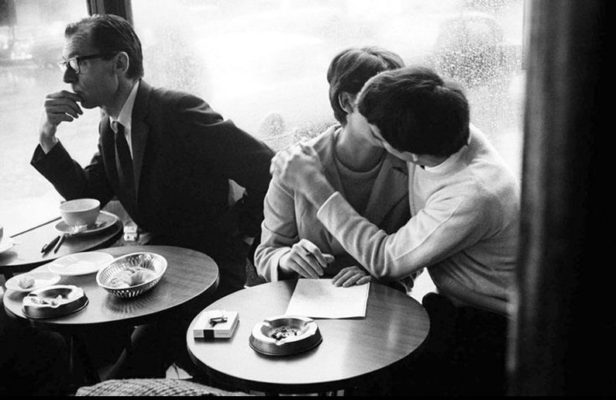 The world of advertising has not lost the opportunity to use in turn the image chic and authentic Parisian bistro in his campaigns.
In 2008 for example, Longchamp chose to shoot top model Kate Moss and French actor Gaspard Ulliel for his new luxury leather goods campaign. 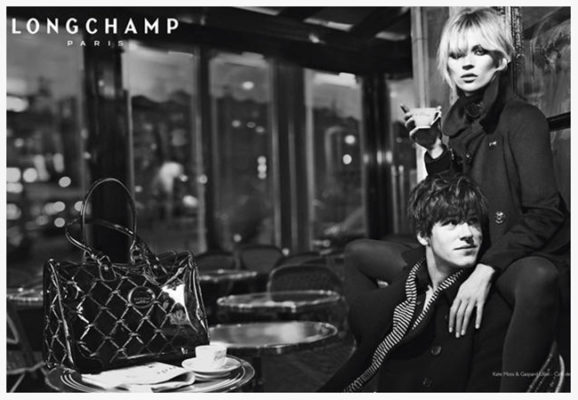 In 2015 it is Chanel who uses the iconic image of the bistro for its spring / summer collection with another icon, this time fashion, the sublime Gisele Bundchen. 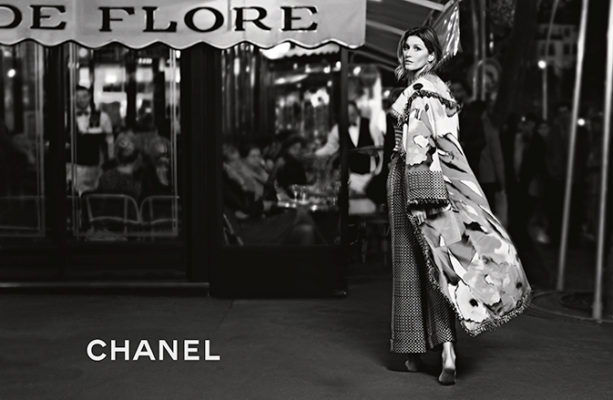 A small detour via Saint-Germain

Dear readers here you are warned, “The Café de Flore” is a must in Paris where you absolutely have to stop for a moment, if only to remember, while caressing the original benches, icons that were there before us and who wrote History there.

Using the right Personal titles when doing Business with French

Added to wishlistRemoved from wishlist 11

Warning: Unknown: write failed: No space left on device (28) in Unknown on line 0

Warning: Unknown: Failed to write session data (files). Please verify that the current setting of session.save_path is correct (/home/ofrench/tmp) in Unknown on line 0