JR never takes off his sunglasses or his hat, and refuses to reveal his identity. As an very active French artist, he exposes his monumental black and white photographs on concrete walls or rusty roofs of cities throughout the world.

They are on display from Paris to Marseille and other places like Shanghai, New York, the favelas of Rio de Janeiro, the slums of Kibera in Kenya or on the barrier of separation of the broken city of Bethlehem. His works of arts focus on anonymous people who are so common to find in the streets. These nameless people then take ownership of this urban art by becoming actors in these creative projects. He is particularly famous for having covered the Louvre pyramid with photographs that blend in with the museum located behind it, until the pyramid seemed to disappear completely. He finished this crazy project on May 25, 2016. 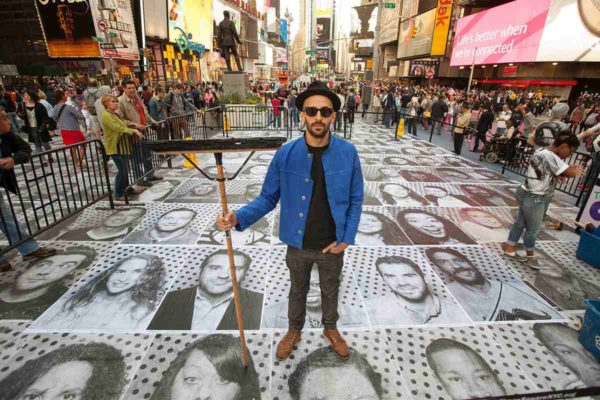 A contemporary artist, born in 1983, JR, or Jean René, grew up in the Parisien region. He studied at Pierre-and-Marie-Curie College in Le Pecq in Yvelines. In 2001, when he found a camera in the Paris metro, he decided to travel across Europe to discover urban art. As a teenager, he began his career as a photographer following his friends on treks across the rooftops of Paris and through its subways. At this point, he wasn’t wearing his hat or his classic Clubmaster sunglasses yet. This period exemplifies the crazy and somewhat acrobatic life of the typical graffiti artists of the capital. Just like an art gallery, the young artist uses the street to hang and display these works of art.

Why was he doing this? To push vertical boundaries, more specifically the walls and facades that serve as a city’s structure, but can also sometimes separate them. Through his pictures of looks and faces, JR wanted to provide these timeless pieces with the opportunity to live on forever. What was the ultimate goal: to provoke the local population and make them start asking questions, trying to figure out the meaning of the artwork and by extension, the meaning of the world.

“From the age of 12 to 13, I worked in the markets, unpacking and repackaging the stands for older sellers”, he told Télérama in 2015. “One day, on the platform of Line A, I found a satchel with a small camera, left behind by a tourist. I thought it would be nice to document the incredible places that I had discovered. ” JR had a little bit of experience with graffiti, before really getting invested in photography.

Art in the heart of the city

You won’t find JR photographs in a museum or gallery. He’s only ever had one exhibition , at Emmanuel Perrotin’s gallery in the Marais district of Paris. The only way to find them is to walk, be it in New York or Rio de Janeiro, and keep your eyes open. The Frenchman works mainly on giant portraits of anonymous people, printed in black and white. He and his team usually stick them on the facades of residential buildings. JR’s approach is to impose his photographs to the eyes of the public. The artist is often quoted saying: “The city is an open-air museum,”. The more time passes, the more his projects grow. “I own the largest art gallery in the world: the walls of the world. I draw the attention of those who would not usually visit museums. ”

One day, he went to meet the elders of Cartagena, to whom he offered to participate in his project “The furrows of the city “. He was focusing on the wrinkles of people’s faces, with which he recreates the story of the city. A city that sometimes changes faster than the marks of time.

In 2013, JR set his luggage down in Times Square ,New York. He invites passers-by and tourists to get a portrait in a photo booth and stick their image on the ground. He starts to build a great human fresco, little by little, right under the feet of New Yorkers. He has also use this medium, the ground, to do a huge portrait of an immigrant man walking. The portrait is about 50 meters tall. This project, entitled Walking New York, was crafted especially for a cover of the New York Times Magazine, in April 2015.

JR has to be a photographer and an acrobat at the same time when he designs his oversized installations , that often go on the blind side of New York buildings, or on old buildings of French villages. You can often find him walking in these same villages with famed filmmaker Agnès Varda. The two collaborated to produce their documentary “Visages Villages”, released in 2017.

To date, he has two workshops, one in Paris and the other in New York. A small team of fewer than 10 people follow him on a day to day basis, which can sometimes be bumped up to 20 people for his most ambitious projects. JR finances his work in part through the sale of prints, which can sometimes go for up to 30,000 Euros, and single pieces that can snatch 200,000 Euros.

JR has also spent a lot of time working with the image of ballet, as he is convinced that it needs to be modernized. The highlight of his year in 2015 was photographing the dancers of the Paris Opera while they climbed into boxes. The shoot was done at the port of Le Havre, for the “Terres d’Eaux” festival. He then had their portraits plastered on these same boxes, along with one of a very deep looking Kenyan man, on 7.5 kilometers of one meter side strips of paper.

JR would pushed his project to highlight people in the streets to the limits with the project Inside Out, started in 2011. The artist brought over a van to Paris and parked it at the foot of the François Mitterrand library. Inside the van there was a photo booth, so that volunteers could have their portraits drawn, before gluing them to the ground. He also transported the van across France to collect other portraits, which were then plastered inside and outside the Pantheon. The idea was simple: “turn personal messages into works of art”. JR has also made trips to several cities around the world, from Tokyo to Toronto. 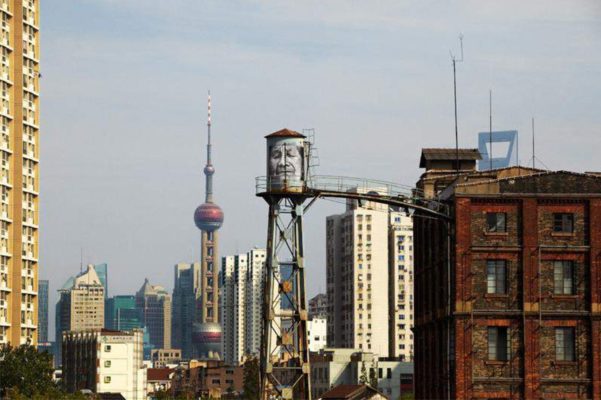 JR’s photos have literally travelled all around the world. Despite their giant size, some of his shots were even transported from New York’s Flatiron Plaza to Jerusalem’s separation wall. JR first started to gain notoriety 10 years ago with his first project, 28 Millimeters: Portrait of a Generation, which was inspired by the riots of 2005. These were portraits of young people living in the suburbs of Paris, which JR sought out, despite the intense criticism and focus. He photographed the director Ladj Ly, a former member of the Kourtrajmé band. The picture shows him pointing his camera like a rifle towards the objective. His first mission was to stick these works of arts, illegally, on the walls of the City of the Bosquets. He then repeated the feat in the Forestière, in Clichy-sous-Bois, where he is from. The words, ”These images challenge the passers-by, in the sense that they question the social and media representation of a generation that can only be seen at the gates of Paris”, are clearly displayed on the artist’s website. As you can tell, JR ’s focus is really to highlight faces that you don’t usually come across.

You’re starting to get the picture now: JR is a socially committed artist, but France’s social injustices are not his only concern. In 2007, the activist artist briefly reverted back to the illegality of his earlier graffiti era when he directed Face2Face in collaboration with Marco Berrebi. It was “The largest illegal photo exhibition ever created”, according to JR. Huge posters of portraits of Israelis and Palestinians doing the same job face each other in eight cities in the territory and on the wall that separates them, their faces either grimacing or hilarious. He realized this amazing feat in direct collaboration with the local population, seeking to make them recognize one other, and learn how to live together. It is the largest illegal photographic exhibition in the world.

The project “Women are Heroes” (see the interview given to Allociné in 2011) takes JR on a journey to the four corners of the world to meet women in 2008. In Brazil, Liberia, Sierra Leone, and in Kenya he meets women who live in the midst of conflicts or who are victims of violence, and yet continue to generously share their world. “By telling me their story, they empower me with huge responsibility – it’s up to me to do something about it,” says JR about the women he has photographed for Women Are Heroes. To conclude the project, JR publishes a documentary that is selected at the Cannes Film Festival in 2010 for the Caméra d’Or. The recipient of the TED Foundation Award in Long Beach in 2011 was also offered to him as an endowment with a request: “A Wish to Change the World”. While he might not be ready to do that just yet, JR does manage to make the audience question his art, which is focused on their ability to look at each other, to seek to understand others and to accept living with them.

The artist has one obsession: migrations. In 2014, using archival footage, he completed the Unframed project at an abandoned hospital on Ellis Island, a mandatory crossing point for immigrants arriving in the United States until 1954, when it was closed to the public. Some time after the election of Donald Trump and his promise to build a wall on the Mexican border, JR has made this topic a a major issue in his work. In October 2017, in Tecate, Mexico, he organized a giant picnic on both sides of the fence so that Kikito, the child whose portrait still sits just above the wall, could be present with his family. “This piece was inspired when I had the dream of a child looking across the border. When we view this child from the American side, he was looking over the wall. But when he was viewed from the Mexican side, he was looking right in front of him”, the artist told RSF. “My work makes sense in relation to where we are. It’s a question of perspective, a social positioning.”

For Serge July, JR has developed into “an artist that is both participative and planetary, simply by sticking his work to surfaces of all kinds and walls of all nationalities. With his huge portraits, he captures the soul of nameless people, women, the excluded, migrants, and the invisible. ”

JR also filmed dancers in action in the middle of the Montfermeil towers. This short film, named Les Bosquets, was taken from a ballet of the same name and inspired by the 2005 riots. What did JR want to accomplish? “To show how the desire to exist in these neighborhoods can fight off precariousness and create beauty where you no longer expect it.” The music was composed by JR’s French friend Woodkid and famous film composer Hans Zimmer. 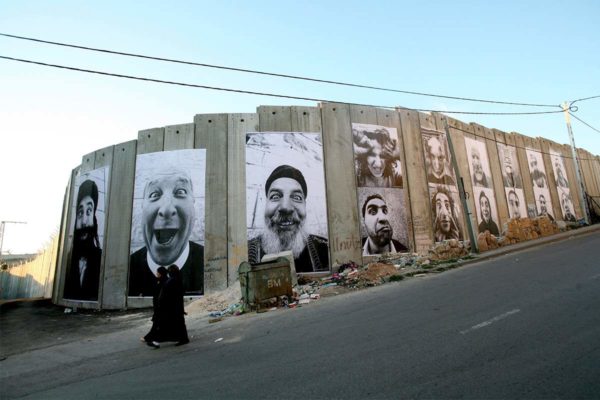 For JR, every artist has a role to play in society. However, he sees himself as an artist that is “engaging” instead of “engaged”. He is quote on the Louvre Museum’s website as saying: “I am often asked for answers. My role as an artist is not that: art is a tool to question the world,”.

Please fill the required fields
Send Message
Login
Sign up as a Student or Sign up as a Tutor
Sign Up
Already have an account Login? Login
Close
Do you want to read more similar stories?

Do you already like us on Facebook?
Do not ask me again for Facebook
Continue to the article »
x
X
×
We use cookies to ensure that we give you the best experience on our website. If you continue to use this site we will assume that you are happy with it.Ok