Warning: fopen(/home/ofrench/tmp/style.instances-5frUYX.tmp): failed to open stream: No space left on device in /home/ofrench/web/ofrench.com/public_html/wp-admin/includes/class-wp-filesystem-ftpext.php on line 185

The Guédelon castle is a crazy project: a medieval construction site to rebuild a castle from the Middle Ages, using the techniques and materials at the time.

On June 20, 1997, the Guédelon masons laid the foundational stone that inaugurated the reconstruction of this castle, located in Southwest of France. A year later, the site became open to the public, for the pleasure of the grownups and the kids. 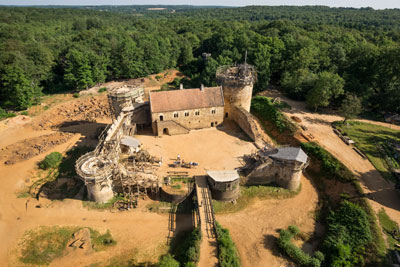 Go back in time with Guédelon!

Located southwest of Yvonne, the castle is a former wild site where an old wooden quarry was discovered. With the help of local artisans, Guédelon castle was built from stone and wood, in respect of the thirteenth century techniques. This crazy project was born from Michel Guyot’s passion for castles: to build a stronghold in modern times with respect to the Middle Age techniques. And this was not even hist first project! This passionate for castles had already embarked on incredible renovation projects, but with the Guédelon castle, Guyot had something different in mind. Initiated in 1997, in the former wooded quarry of Puisaye in Yvonne, the project should end in 2035. 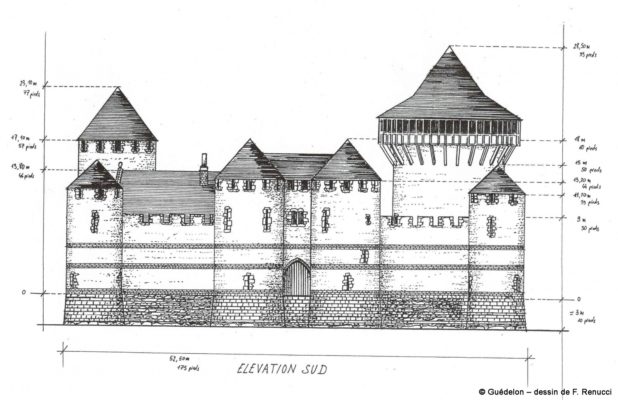 A journey through time

What is most memorable once arriving at the Guédelon’s site is the impression of being immersed in the middle ages: we discover on site a fortified castle in full construction. And, surprise! No cranes or modern machines, but wooden scaffolding and carts. With Guédelon, the idea is to rebuild a modest castle from the thirteenth century with the techniques and tools at the time to understand better the operation. A scientific committee composed of historians and archaeologists ensures the castle is built exactly as it would have been in the Middle Ages. 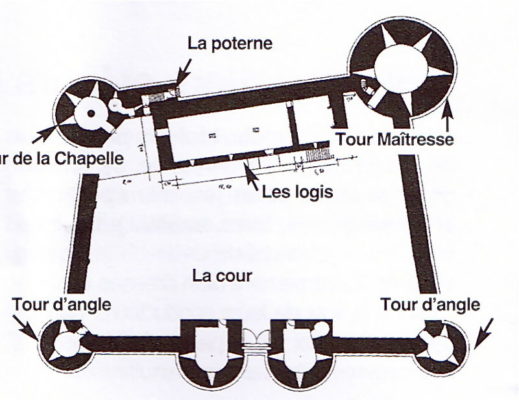 Guédelon is not only a castle, it’s also a huge building site for discoveries of new construction methods. And what a building site! It’s a mini-city organized around Guédelon. A stone quarry, cart to transport the stones, a stone-cutting workshop, masons, lumberjacks, carpenters, a tailor for sewing and fitting and a blacksmith. This mini-city is not only organized to build the castle, but also to decorate and use it. You can find a pottery workshop, a tile factory, and a canteen for breeding animals and the culture among other things. 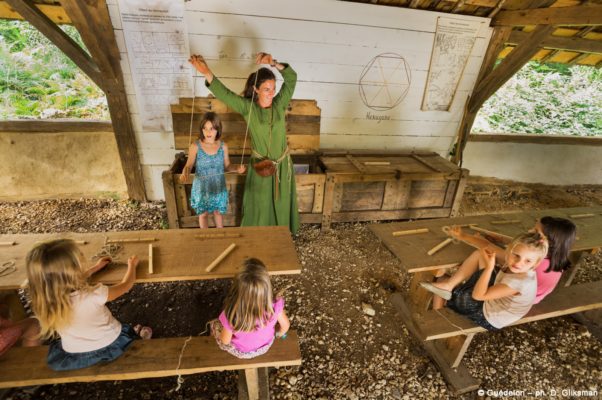 The building itself is a 13th century quadrangular structure with four circular corner towers. A moat surrounds the building with a fixed bridge that allows visitors to enter the vicinity.

There was not much to see at the site opening in 1997. Little by little the castle grew and we started distinguishing different rooms, the added story over the ground floor, the painted walls, Stonemasons, woodcutters, carpenters, etc. were busy to make this site a real journey to the heart of the Middle Ages.

This really is the case since from this moment, we can find ourselves in the Middles Ages, workers dressed with the chasuble symbol at the time, alongside the horses pulling carts with wooden wheels, carrying out the construction of a Philippian genre castle. 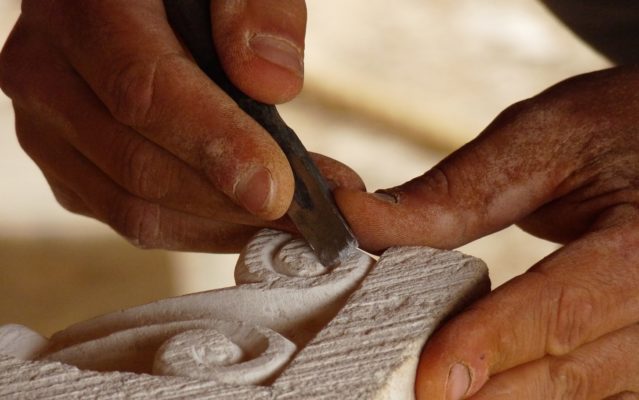 You’ll quickly understand that building a castle takes a lot of manpower on various know-hows. There are fifty craftsmen spread over 11 trades to work on the castle’s construction with a dual mission: Build it of course, but also educate and explain the visitors the essentials of the job on the construction of a castle.

To help them discover the heart of these crafts, volunteer builders bring their contribution ot the building. Some are curious, motivated by the Guédelon’s adventure, others are apprentices as part of their professional training in masonry or carpentry for example. All actively participate in the evolution of the site. 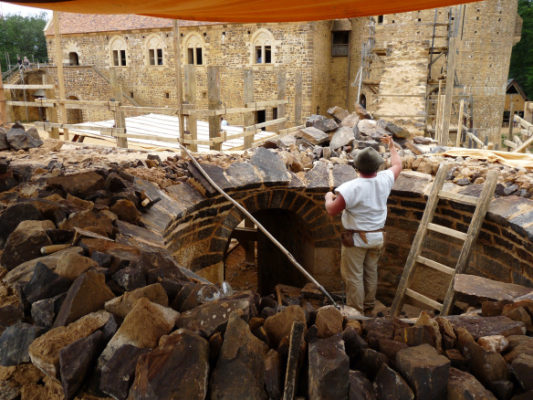 The field is divided into 3 spaces on more than 17 wooded acres: On one side, there’s the castle of the construction trades. This is where the workers explain their jobs and it’s also where we can visit the castle under construction!

Two steps away from the castle is the village with the tilery, the color workshops, stables and animals whom also participate in the castle’s development.

Finally, the forest is home to a beautiful wood resource and also a mill that actually works, thanks to the miller who explains thoroughly the essentials of his job at the time. 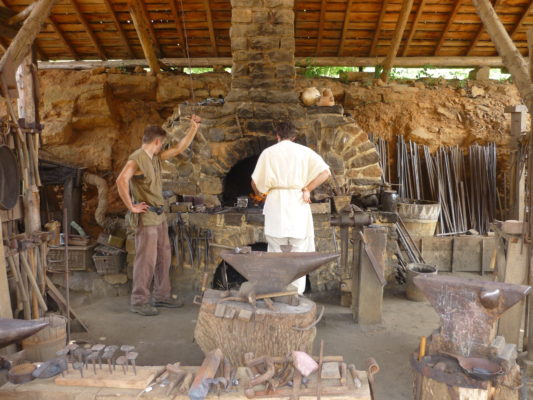 Free exploration or guided tour, we discover the scientific and architectural aspects but also the historical aspect of this approach. However, it is well advised to follow a guide due of the anecdotes which give the impression of being in the Middle Ages and the castle’s construction having in fact started in 1228… as one would believe it!

Guédelon is a fortunate place to approach the knights’ time in a lively and concrete way. The schools were not mistaken by sending 60,000 children yearly to discover the unique site, now belonging to the French heritage. A vocation may be born from this encounter with men who mastered a trade that is centuries old. 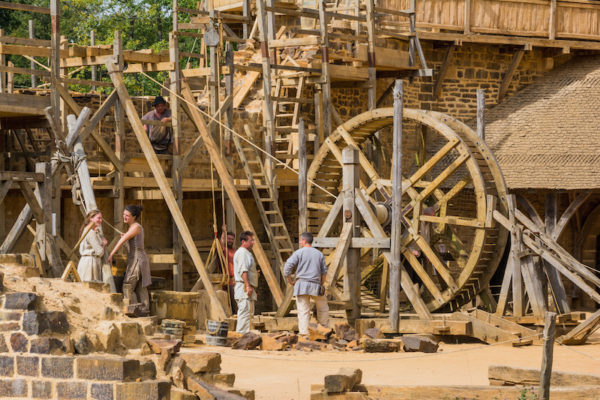 In additional to the worker’s daily routine which you can see evolve in the fields, you can attend different activities throughout the seasons: the creation of murals, baking breads kneaded with mill flour, demonstrations of medieval cuisine, making wooden dishes with a lathe, pottery modeling like in the twelfth century with a turning stick… A true adventure in the heart of the Middle Ages! 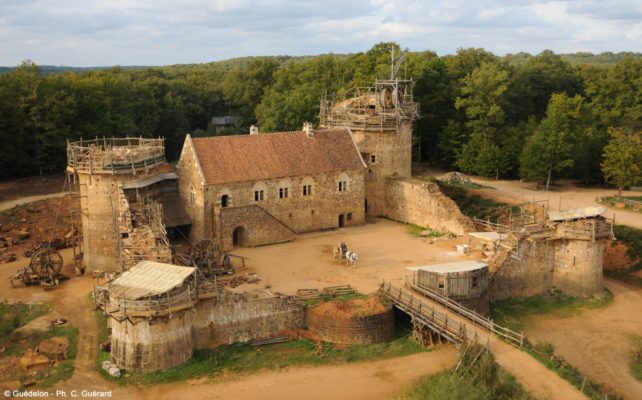 The end of this medieval project is planned for 2035. It is told that a grand ball with a “royal” dinner will be organized in the courtyard and this time, the artisans and workers will be invited. 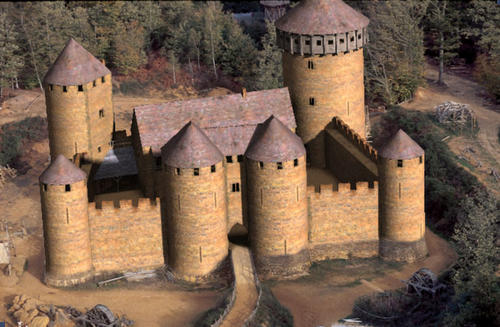