Warning: fopen(/home/ofrench/tmp/style.instances-BcbhCL.tmp): failed to open stream: No space left on device in /home/ofrench/web/ofrench.com/public_html/wp-admin/includes/class-wp-filesystem-ftpext.php on line 185

Passionate with history or paranormal, you must necessarily know this place recognized for many years as the most haunted castle in France. Presentation in detail of this ghostly place.

The history of Fougeret castle

Built in the 15th century, the castle has gone through many ages.

Strategically located, it occupied during the Hundred Years War an essential defensive function. Under the old Regime this one finds itself as place of high justice. When comes the time of the Revolution the owner flees the country giving the mayor of the commune of the time the happiness to make it his residence.

It is under the second empire that the castle takes, under the leadership of a major new restoration, the aspect it still has today (a main building flanked by three round towers and a chapel. Plus two independent towers that are next to the main building) 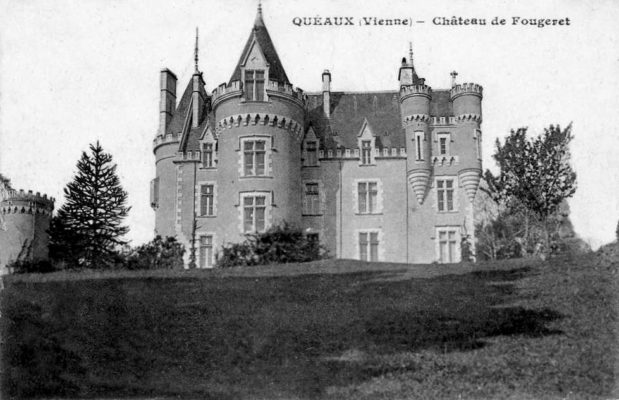 Surrounded by a park of ten hectares planted with trees bordering the Vienne and full of historical treasures such as its frescoes, murals, richly decorated ceilings, mosaics, wood paneling and other medieval and neo-Gothic magnificences, the castle of Fougeret is a must for lovers of architecture and history. 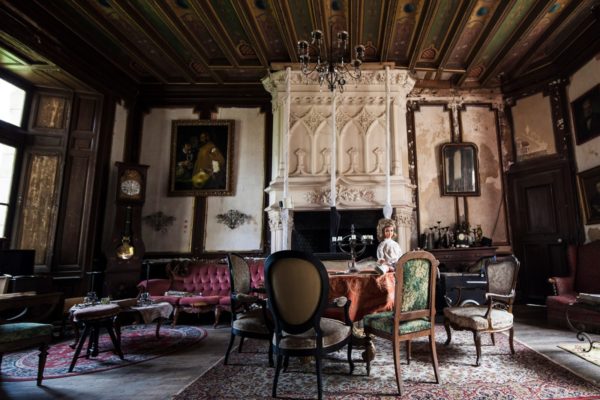 The rich interior ornaments classified the castle of Fougeret

Listed as a historic monument in 2010 by the DRAC this majestic building overlooks a cliff of thirty-eight meters, overlooking the valley of the Vienne.
The castle welcomes visitors today as guest house.

But this place does not only contain great moments of history.
He is also known for several decades for the paranormal facts of which he would be the permanent theater.

In the press, on television (again recently in the show “Salut les Terriens” Thierry Ardisson broadcast in October 2017 on C8 channel) and of course on the internet, the mystery of these events are the buzz.

From the most serious reports to investigations aimed at the most fervent believers in the paranormal and who seek “ghost” with much reinforcement of strange material, Fougeret has received all kinds of different treatment.

While television has been producing reports for a long time, the story around Fougeret Castle has been renewed with YouTube in recent years.
Not only because many documentaries and experiences have been put online by major professional media, but not only.
Many French youtubers, more or less known, have contributed to make this mysterious place known to an ever younger community.

The challenged choices of the owners

Whether you believe in ghosts or not, the fact remains that many decisions made by the current owners of Château de Fougeret are more looks like a vast for-profit joke rather than a real haunted place.

The first is the choice to make the castle a guest house, able to accommodate many people both because of its size.
Another point that suggests that all this would be joke, the decoration of the field. The rooms of course, decorated down to the smallest detail to suggest that the old tenants (understand the ghosts) still live among the living.
This goes from the perfumes diffused in the rooms, sometimes from the orange blossom or a perfume of gunpowder, to the old clothes placed on the edge of the bed.

Add to this models, dolls here and there that do not all have a welcoming appearance and amplifies the atmosphere “horror film”. 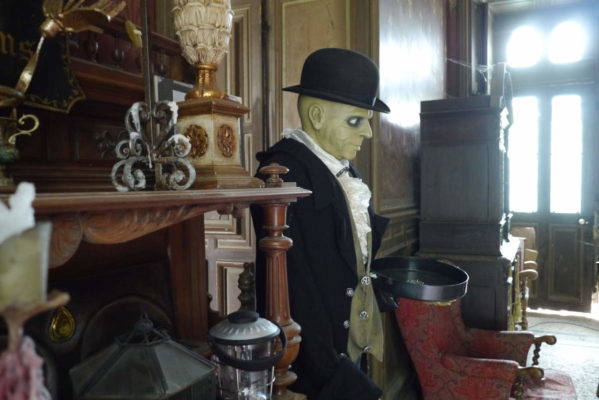 One of the many terrifying models in the castle

However, this goes further since in one of the corridors of the castle, the owners have highlighted a wall of pictures of mind taken over time by various people and to the attention of visitors. 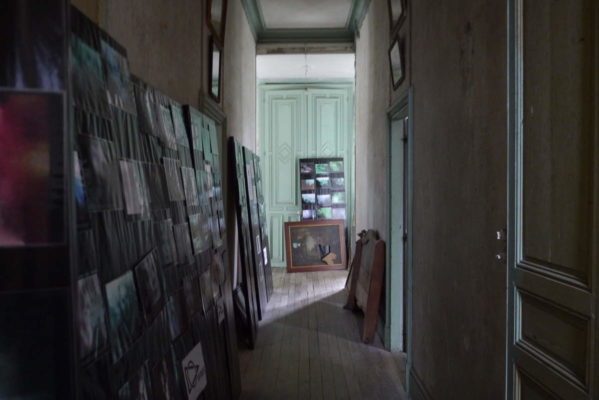 Wall of ghost pictures installed by the owners

Finally, the owner, who ensures that the stagings at the castle are made to pay tribute to history, place and former tenants, and is not intended to frighten people, is however very active in it’s about posting new ghost stories on the castle’s facebook account.

The “evidence” made public

Beyond the many testimonials from current and former owners, simple tourists or many mediums and ghost hunters, there are many pictures circulating online, so-called truthful (understand not retouched) of captured minds in the castle of Fougeret.

Photo of a ghost behind the window taken by a visitor 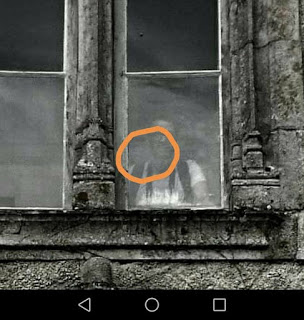 Look closer, a ghost face stands out behind the person at the window

Who are the famous ghosts of Fougeret ?

If one can not deny or confirm here the existence of such facts, it is indisputable that the castle is loaded with stories all more terrifying than the others about the former owners having succeeded one another within its walls.
The many rooms of the place would each house the spirit of a deceased.
We present you all the most important, at the origin of many phenomena according to the testimonies.

In the room known as “the usher one”, killed in the eighteenth century with an ax in the sternum, “people sleep poorly,” says the owner.
How to escape the disturbing eyes of the portraits that cover the walls? Not to mention the disturbing footsteps and other objects that move on their own that would be frequent in this room according to multiple testimonies? Two people even left with scratches. Notably a young woman who took off in the middle of the night, leaving behind her shoes. 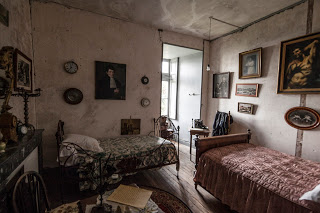 The usher’s room where someone been killed with an ax

In the room known as “the knight” one, between two loopholes, old swords, a pistol and an old stretcher on which rest mortuary masks and a wooden leg. Always a way for current owners to revive the entities of Fougeret.

One of the best known is without doubt “Alice’s room”, who died at the age of 22 from a lightning kidney disease. “She told us that she loved poetry, flowers and citrus.” murmurs the owner of Fougeret. Dried petals dot the secretary at the foot of the bed.
This last room welcomed a few years ago the daughter of the current owners, who after a single night, to develop the same disease that was once fatal to Alice (curable today) and this, while she was she herself is 22 years old. Troubling ! 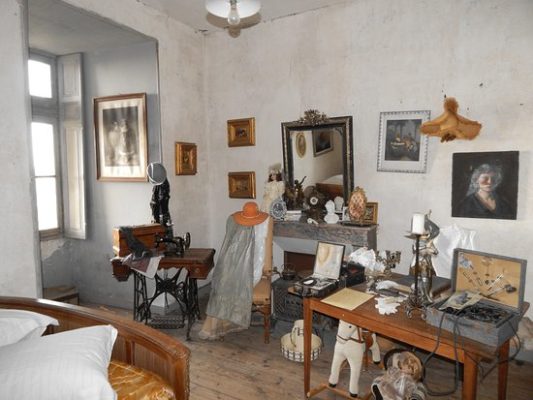 In another room you will discover a dress hanging near the bed as if the room was still inhabited. “Here we have whispers, caresses in the hair,” says the owner.
This is “the room of the grandmother,” a former nanny. The legend says she does not know she’s dead and is waiting for her husband. Meanwhile she look after the well-being of the people she meets. 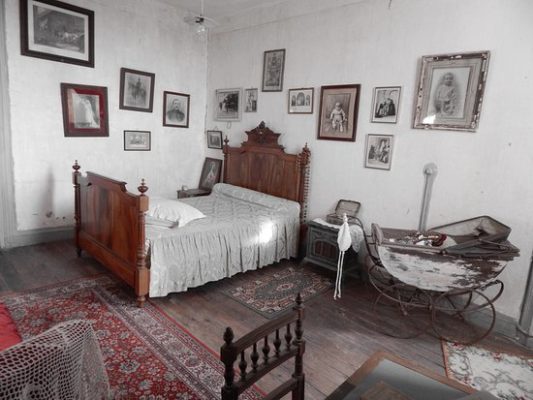 The nurse’s room, carefully preserved as the rest of the rooms

To make an opinion by yourself

Today the castle of Fougeret serves as a guest house, reserved for people who are not afraid to live for a night with the wandering souls of the place.
And given their overloaded schedule (easily booked a year in advance) it remains obvious that the recipe works.
So real haunted house or orchestration with tourist aim, we let you judge for yourself, if you dare.