This French sparkling wine, as its name suggests, comes from Champagne-Ardenne which is a region of northeastern France. This alcoholic drink dates back to the Gallo-Roman era, however, its vineyards belonged to the monks during the Middle Ages.

It is during the modern period that the champagne was made famous, as this festive drink appeared at feasts during the coronation of kings of France in the heart of the region Champagne.

The monk Dom Perignon invented the Champagne Method, wihch consists of an assembly of grapes that makes disappear some defects. Currently, Dom Pérignon is an expensive Cuvée elaborated during exceptional vintage by Champagne House “Moët & Chandon”. This drink acquired a strong international notoriety and became a luxury product protected by its “Appellation d’Origine Contrôlée”, granted by the CIVC (Interprofessional Committee of the wine of Champagne).

Its effervescence comes from the direct carbon dioxide produced by the alcoholic fermentation which is the transformation of sugar into alcohol. The elaboration of this drink presents seven main originality compared to regular wines: the manual picking, the specific press, assembly, second fermentation in the bottle, stirring, disgorging and dosing, as well as a significant maturation time.

The terroirs of Champagne are classified in three categories according to the quality of the grapes and as a basis for determining their selling price: the “grands crus”, the “Premier cru” and “other wines”. There are different kinds of champagne such as the “Blanc de Blancs” produced exclusively from white grapes of chardonnay, unlike the “Blanc de Noirs”, which refers to champagne produced from black grapes. 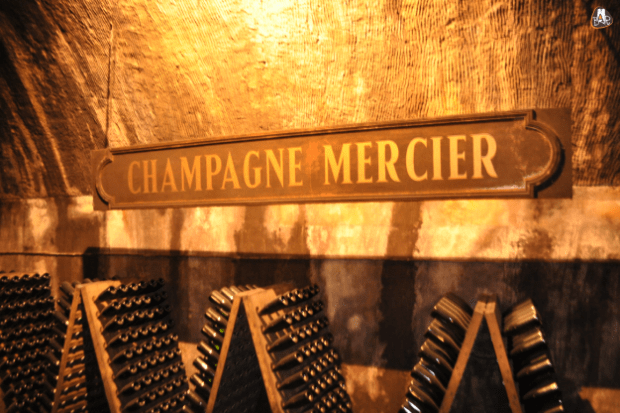 The classifications “non dosé”, “extra-brut, “brut”, “dry”, “demi-sec”, “sec” refer to champagnes that have received different proportions of dosing liquor, however, the “non dosé”, “brut intégral” ou “brut nature” indicate the absence of any liquor (these are the drier champagnes).

The bottles of champagne are also very famous because they present several sizes:
• the eighth (9.4 cl),
• the quarter (18.75 or 20 cl, it is used by airlines and sometimes in night clubs),
• the half: 37.5 cl (it is sold in a restaurant),
• the medium: (60 cl),
• the bottle: 75 cl (the most sold, it has a capacity of 75 cl and is thicker than the
bottles of other wines in order to withstand a gas pressure of six atmospheres.),
• the magnum: (1.5 L is two bottles, the champagne wine is best preserved in a
magnum because it ages more slowly),
• the jeroboam: (3 L, wich is equivalent to four bottles).

The cork of champagne bottles is also well known for its mushroom shape, which differs from other wine bottles because it is only partially inserted into the neck of the bottle.

The effervescent peculiarity of this wine gives it its festive character: the cork jumps. The Champagne is very dedicated to sports victories because during of a feat, it is common to spray Champagne onto the champions and the public. This is very frequent during the Tour de France, during motor sports or sailing baptisms. And of course, during a dinner, an evening, a wedding, a contract signing, this sparkling wine gives the opportunity to share a festive moment.