Warning: fopen(/home/ofrench/tmp/style.instances-Qrbm3g.tmp): failed to open stream: No space left on device in /home/ofrench/web/ofrench.com/public_html/wp-admin/includes/class-wp-filesystem-ftpext.php on line 185

The profiterole is a great classic of French cuisine. It is originally a puff pastry filled with pastry cream, floret or whipped cream very often covered with a chocolate sauce in the preparation of “chocolate profiteroles”.

While they were preparing an apple pie at their restaurant located in Lamotte-Beuvron, Sologne, sister Caroline and Stephanie Tatin forgot it in the oven and burned it. They decided to keep the caramelized apples and add some dough on top … Thus, the Tatin pie was born! 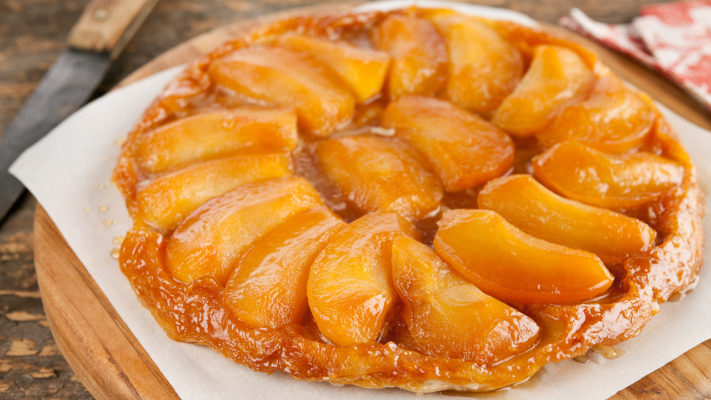 It is a pastry made from puff pastry and custard, usually chocolate or coffee. The puffs are covered with a fondue of the same aroma as the pastry cream, and a butter cream generally scented with coffee or vanilla that can hold the head. According to the legend, this dessert is called la religieuse (the nun) because it has the shape of a NUN   (= church woman) that would come from the color of the frosting, which recalls the dresses of the nuns. This is the most shared theory. It was invented in 1855 by Frascati, famous pastry-ice cream maker in Paris. At the time, it had a different shape: a squared puff pastry stuffed with custard cream and topped with whipped cream. 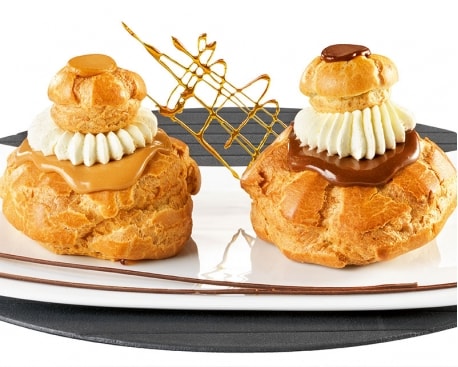 This cake made of butter cream, praline and puff pastry takes the form of a bicycle wheel. Paris-Brest is a brief moment in a cycling race with the same name Pierre Giffard had the idea in 1891. The pastry was created in 1910 to pay tribute to the race, realized by a pastry chef of Maisons Laffitte, Louis Durand. At the time, Paris-Brest was in fact too big to even compare it with the wheel! 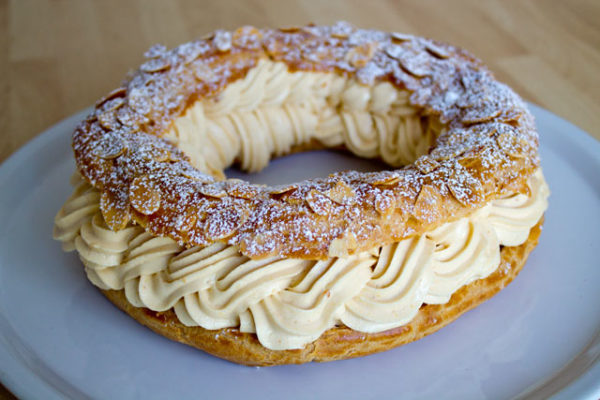 It has not always carry this name. Before 1850, this pastry was called “Duchess’s Bread”. Back then, it was a finger-shaped puff pastry rolled in almonds. It was Antonin Carême, one of the greatest pastry chefs of the nineteenth century who had the idea of ​​modernizing the little duchesses by removing the almonds and stuffing the pastry dough flavored with chocolate or coffee. It was only 20 years after his death, the pastry was renamed l’éclair (eclair). For some historians, this is name is due to the fact that they are eaten very quickly for how amazingly good they are! L’éclair is today one of the most emblematic French pastries in the world. 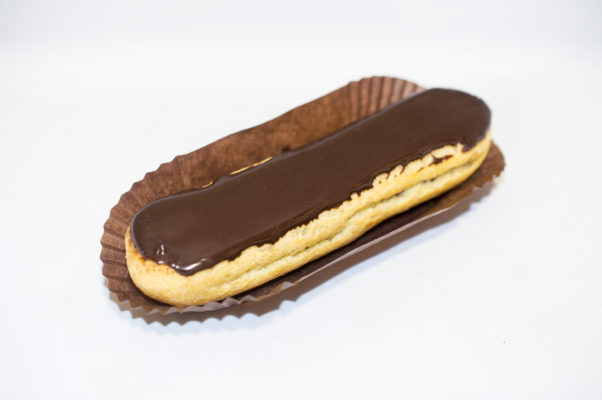 It is a pastry piece made of three layers of puff pastry and two layers of pastry cream. The top is iced with icing sugar or fondue. This pastry, as gourmet as it is delicate to make, was not conceived in one attempt. According to the stories, the mille-feuille saw its day thanks to a succession of improvements. What is certain is that it would not exist without puff pastry! This base of many desserts is superimposed in 3 layers, after already being folded 6 to 10 times, producing 300 to 400 sheets each, which approached the number one thousand, hence the name. 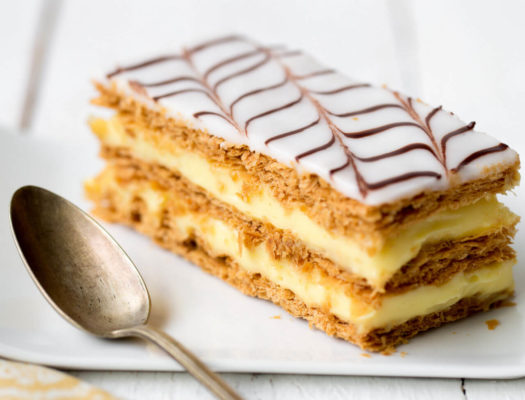 Before uniting two by two, this small cake made from almonds, sugar and egg whites, crunchy outside and soft inside was presented all alone. If quoted by Rabelais, its origin remains obscure. Yet many cities have claimed paternity and many legends have been created. Some claim this “monk’s navel” was created in 791 in a convent near Cormery, others claim Catherine de Medici brought it from Italy, around 1533, when she entered the French royal family. 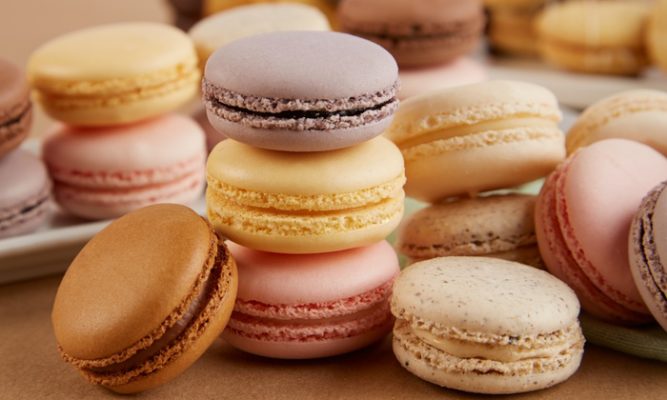 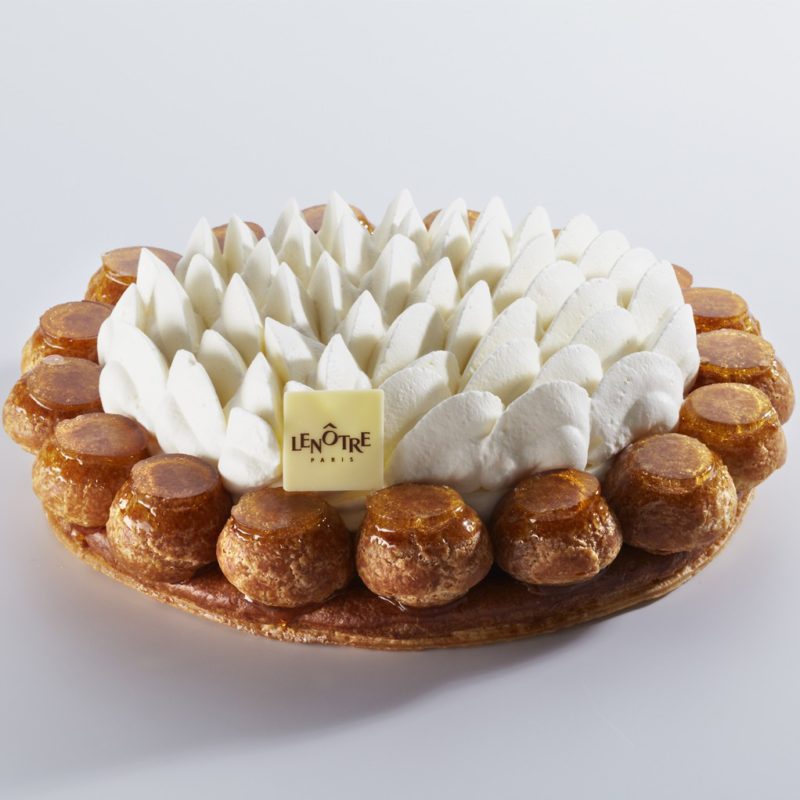 This revolutionary and (almost) light gourmet creation from 1955 owes everything to the prestigious Maison Dalloyau, whose pastry chef at the time, Cyrille Gavillon decided to make a pastry with apparent layers of which only one bite is enough to give the taste of the cake as a whole. As for the name of this rectangular shaped cake, consisting of three layers of biscuit soaked in syrup and garnished with butter cream and chocolate ganache, it would come from Cyrille Gavillon’s wife who thought the cake evoked the stage of the Paris’ Garnier Opera, flat and brilliant. We tried while blinking and we still had trouble seeing it! 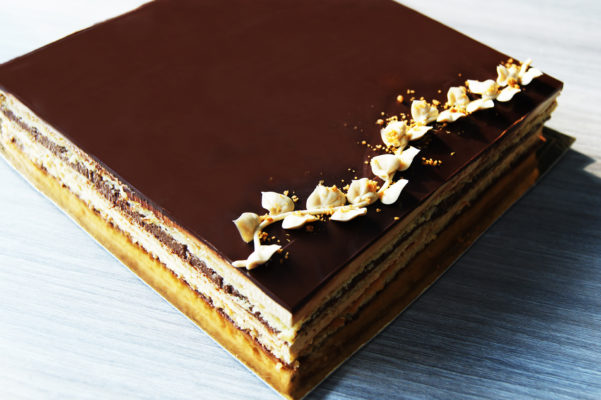 The lemon meringue pie could have been the cute catch of the crowned heads. And for good reason: the lemon was the star of Mari de Medici’s tastings, the lemon tree was Louis XIV gardens’ prince and to top it off, Marie Antoinette was fond of meringue. Too bad the lemon meringue pie, fruit of a series of discoveries, did not appear until the 19th century! To taste it, it was necessary to wait on the lemon association, which appeared 3000 years ago in the forests of the Himalayas, the pie association itself, which dates from the Middle Ages and finally the meringue association whose name appears for the first time in the cookbook of François Massialot in 1692. 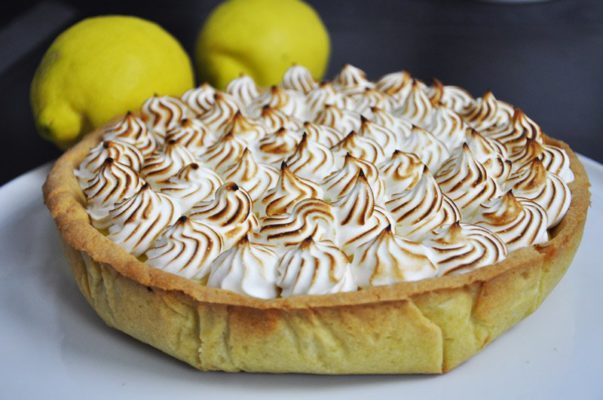 Great classic of French pastry, the strawberry appeared as we know it today in the 60s. Popularized by Lenôtre in 1966, this genoise soaked in kirsh stuffed cream and creamed with strawberry was called at the time Bagatelle, in reference to the gardens holding the same name in Boulogne’s woods. This great pastry shop now has many derivatives: in a jar, individual portion, as a tart … La Pâtisserie des Rêves in Paris even meets the challenge of offering this Sunday’s best dessert all year long by varying its composition according to the season. A sign that we can no longer do without this subtle balance between biscuit, cream and fruit.

This cake would have been born in the 18th century, when the Polish King Stanislas Leszczynski, Duke of Lorraine living in Nancy, found the Kugelhof too dry to his liking, asked that it be washed down with Tokay wine, whicch is later on replaced with rum! The name “baba” probably comes from a Polish recipe to which he strongly resembled. 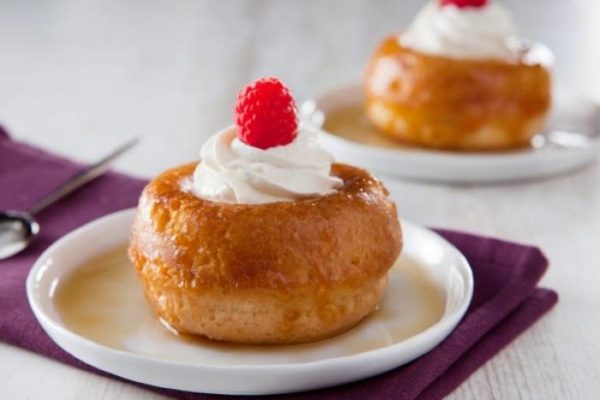 The delicious madeleine was invented during a dispute. In 1755, Stanislas Leszczynski, always the same as that of the baba rum, gives a reception at Commercy’s castle, in Lorraine. During dinner, he learns that a spatter takes place in the kitchen between the steward and the cook who hands over his apron by skipping dessert. It is the servant Madeleine Paumier, who makes up for it by improvising delicious egg cakes. Over the moon, King Stanislas decides to baptize the famous cake with Madeleine’s name. Commercy’s madeleine is born! 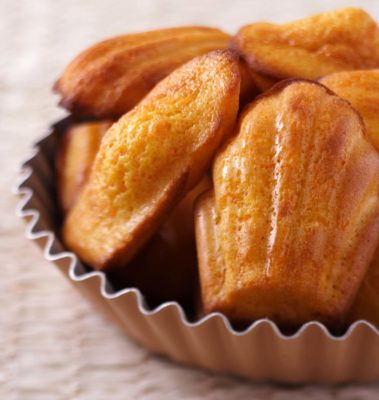 Clafoutis is a cake traditionally composed of hidden cherries, that is to say, completely covered with a flan. This is one of the easiest desserts to make and a sure pleaser! Flour, milk and eggs are your basic elements, while the filling can be adapted to the seasons or your desires. There are indeed as many recipes of clafoutis as there are fruits, since this dessert can be embellished with pears, apricots, apples, grapes or red fruits. Nothing is very clear about the history of clafoutis because two etymologies are advanced. For some, its name comes from Occitan dialect, clafiqui means “filled”, so cherries. 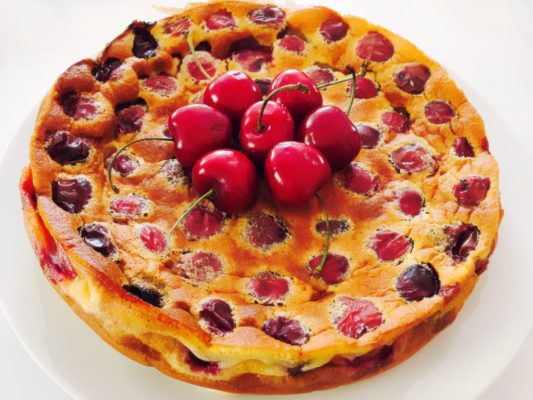 The financier is a pastry containing almond powder. It is crispy on the outside and very fluffy on the inside and its recipe is quick and easy. The financier is deliciously accompanied by a cream and a chocolate mousse. The financier was at the origin of oval cupcakes, made by the sisters of the Visitandines Order, until others decided to reproduce the recipe by giving it a different shape. The legend says that the financier finds its origins in the 1890s when a French pastry called “Lasne”, whose shop was near the stock exchange, invented the recipe for this cake that can be eaten on the go to satisfy the financial professionals and businessmen in a hurry who did not like to get their hands dirty. 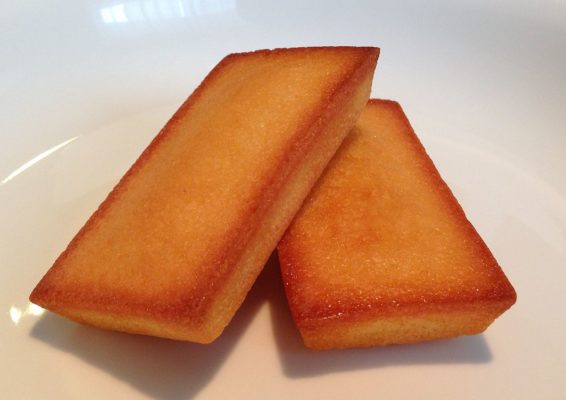 Kouign-amann is a cake from Brittany. It’s a pastry-baker. This cake is made from bread dough, like a pizza, covered with a mixture of butter and sugar, then folded into flaky and scarified lozenges on the upper face of said dough. During cooking, the butter-sugar mixture oozes through the caramelizing lamination, giving this specialty a melting texture on the inside and crisp on the outside. In Breton, kouign means “cake” and amann “butter”, so kouign-amann simply means “butter cake”. We could have just guessed it after the first bite. 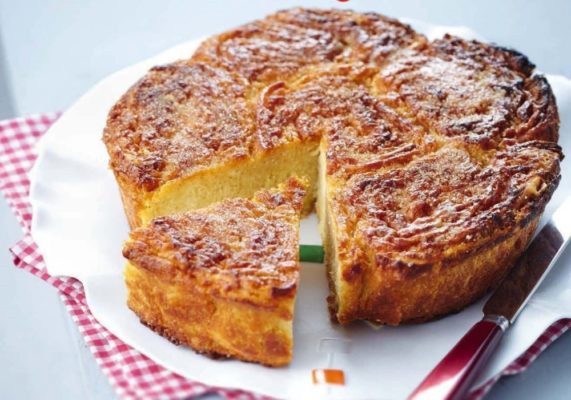 It is commonly found filled with vanilla ice cream, sometimes accompanied by whipped cream. Originally, the term “profiterole”, used by Rabelais, meant a “small profit”, a small bonus received by the servants. From the sixteenth century, the profiteroles became dumplings baked under the ash, which was thrown in the soup a few years later. It would have to wait until Antonin Carême stuffs a dough with pastry cream puffs in the 19th century for the profiteroles to become the succulent dessert we know today. 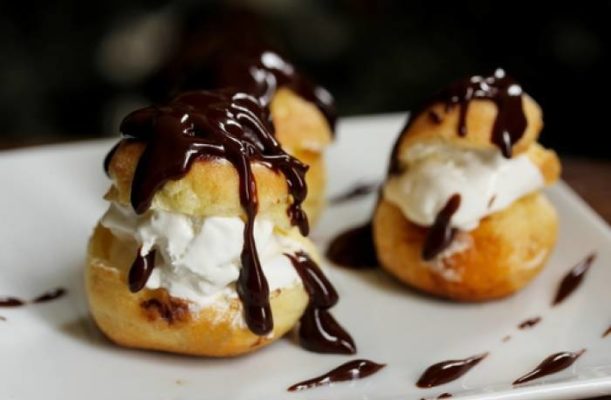